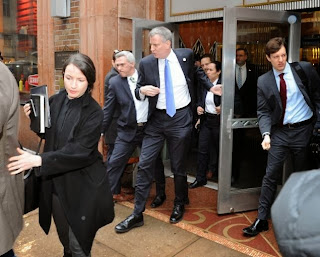 Get ready for even taller skyscrapers and more densely packed neighborhoods.

Mayor de Blasio told a closed-door meeting of real estate barons Wednesday that he has no “hangup” about allowing them to supersize their developments if it means creating more affordable housing.

“As we get to know each other . . . I hope people hear me loud and clear that the only way I can achieve my goals is if we are building and building aggressively,” he said.

Leaving no doubt what he meant, de Blasio said reaching his housing goals would require erecting the biggest buildings possible.

He called it a “willingness to use height and density to the maximum feasible extent. This is something I’ve said in our previous meetings I don’t have a hangup about. I think it’s necessary to do what I’m here to do.”

De Blasio made his remarks to the executive board of the Real Estate Board of New York, known as REBNY, where he was warmly received. His office later released a recording of the mayor’s opening remarks to the group but not his comments during a question-and-answer session.

Hey, Bill, for the past 12 years, we allowed towers everywhere. It didn't help the affordable housing situation.
Posted by Queens Crapper at 12:05 AM

Where do you propose developers put affordable housing units in their new luxury towers on W57th Street?
A $5 million dollar unit above a $200k unit?

Doesnt the government think about the parking situation in certain areas? How about the already overcrowded schools? How about the lack of doctors and hospitals in this city? If you want a bigger population, you have to account for all the public services that people receive, you just can't build without a plan change to other services.

this is what led me to vote against him in the primary and election.now in addition to the rent,the towers are too damn high.

the blaz is nothing but a big fat fraud,these towers are going to be built in a hurry and shoddy and will be dilapidated just as fast.It'll no doubt create a new generation of slumlords.

Technological "progress" will never regress. It only moves forward.

Housing apart from the consideration of everything else is insane.

I'd stop any pretense of planned urban development and let's have some early 20th century version of New York's development anarchy.

Catering to the whims of handful of developers who are funding the election campaigns is worse than nothing.

and none of this for the A train i see...

You can build schools and other amenities within the first few floors of new apartment buildings across the city.

That only makes sense here. Sprawl is unsustainable and will cost the city lost revenue and more expense in the long run.