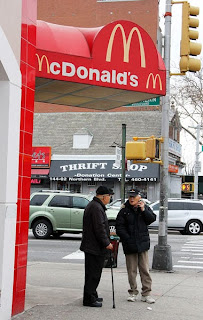 State Assemblyman Ron Kim (D-Flushing) has proposed a new tax credit for restaurants that allow seniors to hang out in their establishments.

The new tax credit is an attempt to tackle a fight between business owners and seniors who sit socializing in their restaurants for hours on end.

The issue was highlighted when a group of Korean seniors were kicked out of a Flushing McDonald’s by police after spending hours sitting in the franchise after only buying a $1.09 cup of coffee each.

News of the controversy spread quickly all the way to Korea and prompted Kim to broker a compromise between the two groups that would have the McDonald’s extend its maximum sitting times during non-lunch hours, which the seniors agreed to respect. Kim said the spat was indicative of a larger problem that seniors do not have enough public spaces where they want to congregate.

“Older adults don’t want to be confined to one place. Instead of telling them where they have to go, we’ll go to them,” Kim said. “This is one of the possible solutions than can help alleviate the problem.”

A couple weeks after the controversy in Flushing, a group of predominantly Guyanese seniors were kicked out of a Burger King in Richmond Hill for staying too long.

Assemblyman David Weprin (D-Fresh Meadows), whose district includes the Burger King, is setting up a summit so that the Guyanese seniors and the owner of the burger joint can reach a compromise similar to Kim’s.

The lunatics have taken over the asylum, folks.
Posted by Queens Crapper at 12:14 AM

Why don't we let kids loiter too? Why is it okay when the elderly does it?

Who is paying for this tax credit???
These immigrants have crapped all over Queens, broken laws , paid no taxes, ruined neighborhoods by building as they please, and now we have to give an American institution a tax credit because these same immigrants refuse to follow rules??? Outrageous!!!
Weprin and Kim deserve to be voted out next time around! Who the hell do they think they are bartering with these people? This is America. Love it or leave it!

It's getting Krazy in Flushing !
How about a tax credit for Americans who put up with all the "Crap" going on in our neighborhood.

These people have some Damn nerve. They want to inconvenience everyone else! Wait until the money they lose from their food exceeds the price of their tax break! Maybe once that starts taking a huge toll on profits maybe then will the restaurants will start waking up. Why can't they just hang out in the casinos or the racetracks like the rest of the elderly people? Or why don't they set up a part of their church to have a "hang out" section and just buy your own Damn coffee machine?

What about all the Mexican day laborors, they need a cozy place to hang out during the day. Can they take over a McDonalds's too?

What about using your backbone and protecting our local businesses. Those seats are for paying customers not loiterers.

Why doesn't Ron Kim open his office and let those old people hang out there all day??

It's bad enough my kids and I can never get a seat at Koryodong because of these loiterers, now we can't get a seat at McDonald's either?

How about fining Asians that:

Force the phony churches to take care of the elderly, not American corporations!

Let these people take care of their own - they've stolen enough money from the US to afford it.

Tax Break? ARE YOU @$@# kidding me Ron? Because you want to be the superhero in this situation, you're strong arming these businesses into let people loitering? If you give me a tax break, I'll let them hang out at my house and make them coffee as well. GIVE US A BREAK.
Let's make some real changes, not this BS your proposing. I cant believe you wasted all this time on drafting a bill over 15 elderly people that are loitering in a McDonalds. Was there nothing more constructive to do? How about Flushing HS, how about the quality of LIFE issues that are plauging Flushing. DiSGUSTING!!

Why not also mandate that the local offices of state assembly people offer a number of tables and chairs as a lounge to the elderly equal in number to what this law would require. Also mandate they all be conveniently located street-front offices. If this is such a good idea, Kim and his colleagues should lead by example.

Well, you know, again, where is the library here?

They seem to have limitless funds to build crap, and precious little to well run a library.

This is a major fail. We spend a large sum to keep these places open and have programs for seniors in them.

How about their board engaging in big-time personal philanthropy just they way old Andy Carnegie did?


The city keeps closing senior citizen centers where they used to hung out and some private centers are opening everywhere but most seniors can't afford them.
The Asian community should come with a solution since it's also a cultural issue, Asian people tend to gather to exchange impressions and experiences.

It's only a $1 cup of coffee. The .09 is the sales tax, which is not really revenue. Typical lazy reporting.


Actually, it was under 25% - around 23%, the lowest in the history of New York City, with just over 1 million people turning out to vote (for comparison, the 2001 election had 1.5 million voters).

Fine, but defund the senior centers then.

Oh, they couldn't do that. That'd be too intrusive on the elected official's office. But wanting McDonald's to do the same is not intrusive on it's business.

Freakin' politicians! Always trying to make themselves look good at someone else's expense.

How come Ron Kim doesn't come to aid of the people who pay for food and can't sit down to eat it? There's a lot more of those than these old people loiterers who probably don't vote.

Don't do this Ron! People deserve no hassle seating in a commercial dining establishment.

We have to be more sensitive to the new cultures that are coming to America. It's no longer called a "Melting Pot". We must now embrace diversity and Kow-tow to our new fellow citizens and immigrants.
Being facetious :-D

The coffee costs the customer $1.09. The article did not delve into what portion of that is tax — that's kind of not relevant to the story.

I understand the outrage over the tax break, but consider the alternative: spending huge sums the city and state doesn't have on more facilities and mental health services for people who would otherwise have nowhere to socialize - even if they're just too eccentric to go to a senior center. I think it'll save in the long run.

Ron Kim wrote an op-ed article on the subject two weeks ago in the Daily News. And then the problem also developed in Richmond Hill.

Are the writers for The Onion also submitting their articles to The Times Ledger now?

This is an interesting story. I am glad it is happening to mcdonald and not the post office.

Face it, McDonalds restaurants have become low class establishments. If the old farts who stink up the library and cost $$$ for senior centers would just go there instead, we'd probably all be better off.

Ron Kim sits there and panders to ASIAN senior citizens, but does nothing for express bus riders who take the QM2 and QM20 express bus in his district. There are a lot of WHITE senior citizens in Whitestone and in Mitchell Gardens who want better express bus service in the community whose needs are being ignored