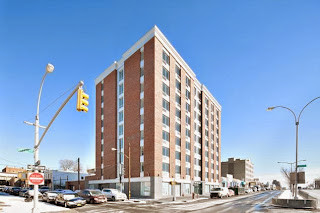 The neighborhoods are especially appealing because they’re only about a 30-minute subway trip to Manhattan, he said.

Thomas Sullivan, 24, who works in marketing, moved to New York six years ago. Since then he has moved, and been priced out of, Williamsburg, Bedford-Stuyvesant, Ditmas Park and Astoria — before settling in Jackson Heights.

And the price of land, where new apartment and condo buildings can rise, is about 50% to 60% less in Woodside than it is in Astoria or Long Island City, he said.
“Developers are snapping up one- and two-story commercial buildings or warehouses or even residential lots and tearing those down,” Benaim said.

Jeff Orlick, 31, a food blogger who hosts events in the area, said he moved to Jackson Heights seven years ago for its multiculturalism. It is the most ethnically diverse community in the country.

“There aren’t trendy bars popping up yet,” said Orlick, of iwantmorefood.com, a block that chronicles food and drink in Queens. “But I feel it coming. More and more younger people from Brooklyn and Manhattan are moving in here.”

These real estate shilling pieces by Clare Trapasso are getting kind of old. They always follow the same format: Take a neighborhood that has been called "the next big thing" forever, interview a realtor that targets yuppies (Eric Benaim seems to be her favorite,) and then throw in some comments from a food blogger that supposedly knows what makes neighborhoods attractive to assholes that will make things unaffordable for current residents.

Wake me up when they get to East Elmhurst, Ozone Park and South Jamaica.
Posted by Queens Crapper at 12:19 AM

It takes one dumb blogger or yellow journalism rag to ruin a neighborhood.

this is quite unfortunate,the blaz(if he still wants to make it one city)better tell his lobbyist/planning commissioner to nip this in the bud and make sure the rents stay steady or else there will be tent cities in flushing meadows park.

although this might be a longshot for that idiot foodie(what an awful word),because these neighborhoods are just as unappealing and have roving gangs like the untouchable brownsville and east new york.

They'll be all in Juniper Valley Park soon- watch out

I like how they're moving in not because the neighborhood is great, but because they can't afford to live where they really want to live. This is how real estate in Queens advertises itself these days.

Well, they said exactly the same thing about Jackson Heights 10 years ago on New York Times.

Oooo. It's the most diverse community in the country. And it shows.
What a jerk.

Almost in passing do they note that they quality of life is going into the toilet and they can no longer afford to live in their homes.

Moved in cause the area is "multicultural", yet finds the area doesn't have "trendy bars" insert white bars. What a hypocrite!

Could all Woodside londlords PLEASE "price out" these out of state multicultural goobers NOW before they get their claws into the neighborhood??

I wonder where all the Irish who abandoned the area in the mod 90's because of the Celtic Tiger will come back to now that their economy is shot and their former Queens hoods are now third world cesspools and soon to be VIBRANT! DIVERSE! overpriced multicultural Meccas.

They need to start deporting illegals for more space and the government needs to do something about the population in nyc. Nyc can not handle 9 million people. There's not enough space over here. I suggest that Mr Sullivan move back to the state he came from and he can take all the yuppies with him! There's no room in nyc for more true non - new yorkers. Plus their state is probably 100 times better than this dump called nyshitty

Jeff Orlick, 31, a food blogger who hosts events in the area

said he moved to Jackson Heights seven years ago for its multiculturalism.

Don't forget to mention the VIBRANCY!!!

It is the most ethnically diverse community in the country.

Remind me again what Robert Putnam's study on diversity said, and why he suppressed his findings....

“There aren’t trendy bars popping up yet,”

And they never will!

“But I feel it coming. More and more younger people from Brooklyn and Manhattan are moving in here.”

Just like Brazil will always be the country of the future, Woodside and Jackson Heights will forever be the neighborhoods of the future!!!

EXHIBIT A FROM VALLONIA

So "assholes" with jobs and money are not allowed to live in Queens? Only crackies, welfare cases, immigrants and 90 year old Irish widows? I'm confused.

People with jobs and money already live in Queens and don't need to be displaced by those from elsewhere looking for their temporary big city experience. You're not confused, just a bigoted idiot.

A heartfelt THANK YOU to all those fought against extending the 7 line into Whitestone / Auburndale / Bayside in the 60s and again in the 80s!!!

Orlick is a hack who is perpetually stoned. He moved to Jackson Heights so he'd be able to get late night munchies. Now he makes money off of other people's hard work by offering tours of the "diverse" offerings.