People are finally waking up 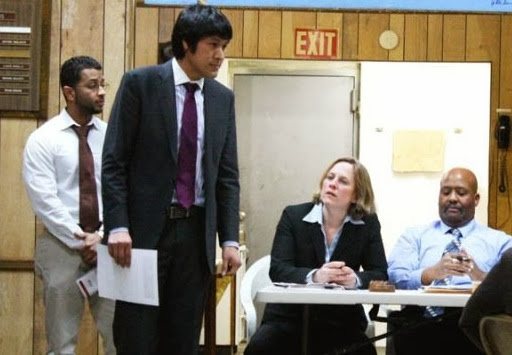 A normally calm Community Board 4 got unusually testy at its Tuesday meeting.

During the legislators’ reports, the topic of the controversial Willets Point development plan prompted one board member to quarrel with an aide for Councilwoman Julissa Ferreras (D-East Elmhurst).

CB 4’s Judith D’Andrea vehemently expressed her opposition to the proposed construction of a mall near Citi Field and a hotel and office space across the street, where a number of auto body shops currently operate, as she claimed it’s just another instance of legislators moving forward without community support.

“It’s parkland,” D’Andrea said in reference to the Citi Field parking lot, which is a part of Flushing Meadows Corona Park and subject of a new lawsuit. [See separate story]. “I’m tired of legislators and our elected officials ramming these things down our throats and all they keep saying is that it will bring jobs. What kind of jobs? Are they union jobs? Are they low-paying jobs? Those questions are not being answered.”

Ferreras’ representative Ivan Acosta, a new member to her staff, defended the councilwoman.

He repeated that she believes it will bring construction and union jobs, with D’Andrea barking back with questions of whether those jobs will be permanent, to the sound of applause from other board members.

“When she gave her State of the District ... she called Willets Point ‘a valley of ashes,’” Acosta said. “One of the things that will finally be done will be affordable housing. She thinks it will bring jobs and affordable housing to the district.”

“That affordable housing was pushed back to 2025!” D’Andrea fired back. “If you’re going to paint a picture, paint the whole picture.”

After the back-and-forth, Chairman Louis Walker said the board will request Ferreras’ presence at a future meeting so members can question her over the project.
Posted by Queens Crapper at 12:51 AM

Lil Adam did a hatchet job on Tony Avella for opposing the "development" of Willets Point.

If I was D'Andrea I'd be careful.

First the good councilwoman Ferreras had a female biker working for her and now a South of the Border Lurch look-alike.

Just read that article - what incredible bullshit! Tony is the ONLY politician that gets things done. We don't need more shopping or hotels in Third World Flooshing!

If you're going to give land away how about giving it to corporations that might provide jobs? Not that we can count on American corporations providing jobs for Americans anymore.

The only growing job segments seem to be teachers and nurses. We have an aging population followed by immigrant spawn. There's not much in between.

People need to be speak out even more and louder than this. America especially NYC and Queens have remained silent for too long. That is why all this damage has been allowed and us the residents lack any say. Not to mention the countless souls who just gave up hope and moved. But us who remain, chose to stay or move into Queens must look to the future to get involved. No more illegal deals involving parkland, no more shady deals on development without the council and community's knowledge and consent. Enough is enough, why should people higher up in whatever positions they have dictate for a whole community or borough, they only have a job to represent us the residents. Last time I checked this is suppose to be a democracy not a bunch of idiots who think they are dictators.

Sounds like the unions are behind this again. Give away public land to protect the bloated salaries and benefits of union bosses.

There are no Americans left in Queens. That's why politicians get their way. Do you really think they care about 3rd world immigrants who see Queens just fine the way it is. The sheeple of Queens won't speak up.

Where did this doofball come from?

What a typical county hack.

If the Mexicans or that angry guy Joe in Jamaica want to fight LET AND GOD BLESS THEM !! A big part of the problem is to many sheeple with no balls to fight or even vote:
The internet and TV has twisted Americas young males (1/2 your voters today) into useless lumps of metrosexual malaise--my own useless hipster nephew (who drinks herb tea and wants to be a teacher)included

50 years ago, Hollywood and television was filled with examples of positive masculine role models that young men could look up to, NO MORE TODAY FORGEDABOUDIT ! Today’s entertainment industry routinely portrays men and middle class as clueless and bumbling oafs at best (think Homer Simpson, Everybody Loves Raymond, Married With Children, Morning talk show casts hosts All your SNL characters). or at worst as aggressive sexual predators,
Since advertising is primarily aimed at women, men in commercials are also now routinely depicted as either being emasculated losers or stupefied morons.
Now our young are actually believing and BECOMING what they been spoon fed and we have the voting results and shitty elected to prove it.
How many young guys today are concerned about working on cars, hunting over the shopping mall, Ipods & pedicures ?
Allow and support whatever warriors we have left fight !!

A number of you commenters, informed though you may be, are little help. Your comments are a cheap way to let off steam without accomplishing anything. You don't have Tony Avella's pulpit, so it's going to take more than that to have any chance of impact.

How many of you actually contributed time or resources to WP United or any of the ordinary citizen campaigns this past season or ongoing civic causes?

It's easy to spout off to Queenscrap, but of limited use.

"Where did this doofball come from?

What a typical county hack."

Its getting closer to the day when this nation needs a revolution.

I look to Kiev with envy. we dont have that passion here in the US anymore.