DeBlasio leaves Queens like a bat out of hell 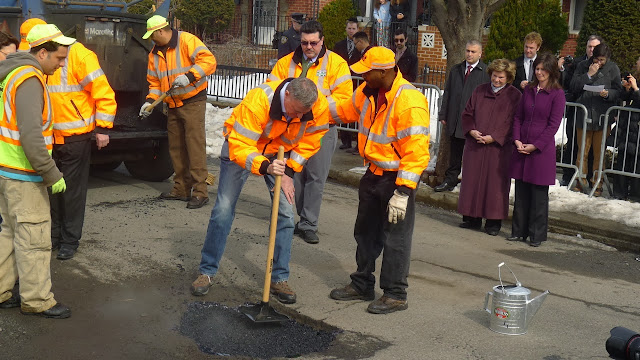 As CBS 2′s Marcia Kramer reported Thursday, the mayor’s two-car caravan was seen speeding, blowing through stop signs, and violating other traffic laws. Kramer reported that if the driver of the lead car, which carried the mayor in its passenger seat, would have racked up enough points to get his license suspended if he’d been ticketed.

When the mayor announced his 62-point safe streets initiative, which includes lowering the speed limit to 25 mph, he said, “We want the public to know that we are holding ourselves to this standard.”

But Kramer reported the mayor failed to practice what he preached Thursday.

CBS 2 crews found Mayor de Blasio’s cars going through a stop sign at a Queens intersection, and that wasn’t the only traffic violation caught on tape.

Isn't this the guy who's become famous for being late everywhere? What was the rush, Bill?
Posted by Queens Crapper at 12:46 AM

PLEASE PLEASE PLEASE stop with these awful photo-ops. They just make elected officials look even more like the assholes and out of touch folks they already are.

If he really wanted to do a useful photo op, he would have come out to Jamaica to see the awful quality of life issues, not filling pot holes, which would get filled without de Blasio.

no sense of decency

and to think that how many more potholes they could have fill yesterday if they did not waste hours setting up that photo op and coaching the Blaz to lay down that blacktop.

then there is the willful obliviousness,not even giving a shit of the prospect of media following him to stand by his vision zero traffic agenda.(don't f with M. Kramer).Although,a lot of dumbshit drivers today having been running the stops and speeding with more frequency the past 10 years,so once this is implemented,its not going to do jack.

When asked by a reporter "How was your pothole filling experience?" DeBlasio replied he found it "Engaging". I wonder if the guy's who fill 200 or 300 a day find it engaging or backbreaking. What a douche bag we have for a mayor...

The old and never ending political game of "Do as I say and not as I do."

Typical Marxist. "Do as I say not as I do". Fugazio will live large as he destroys the working/middle class in NYC.

"Do as I Say (Not as I Do): Profiles in Liberal Hypocrisy" is a book written in 2005 by Peter Schweizer. To the list of liberal politicians the book details, we can now add deBlasio's name!

Oh leave him alone. He had a police detail. He is our mayor. He has places to go and people to see. On official business.

The NYPD will say its an anti-terrorism tactic to blow thru stop signs and red lights.

Bill the Red is treating the office of mayor like its a monarchy as much as the billionaire did.


ALL POLITICIANS ARE CROOKS. ALL OF THEM.

Didn't Mr.Wilhelm get his pastor buddy of out jail the other day?

He stated that over 100 thousand potholes have been filled so far. But he didn't tell us that mire than half of them reappeared just a week later. Ever watch DOT workers filling a pothole? Think Larry, Mo, and Curly.

Drove on Grand Central Pkwy near LaGuardia yesterday.
The brand new roadway that took 2 summers to complete is all shredded with pot holes!!! This should not have happened if the project was done correctly! What a disgrace for our city, and to think that the 2 year project cost over $300 Million!! And recall all those traffic nightmares we had to endure while construction was going on. DOT sucks!!! Who is overseeing these projects ?

Watering pails and sticks....that's how this 21st century city of the world fixes it's potholes. A disgrace!!! How embarrassing!

"Although,a lot of dumbshit drivers today having been running the stops and speeding with more frequency the past 10 years"

I sincerely believe, and I'm not being snarky or wiseass here, the recent spate of dumbshit drivers cited above are the result of "Newcomers" to our country (Illegal aliens) bringing their shitty driving habits/skills with them. Vibrant/Diverse?

Like most socialists, rules for the ruling class are different than the ones for everyone else.

I sincerely believe, and I'm not being snarky or wiseass here, the recent spate of dumbshit drivers cited above are the result of "Newcomers" to our country (Illegal aliens) bringing their shitty driving habits/skills with them. Vibrant/Diverse?
-----------------------

Part of the issue, sure. Look at the Dominican Republic. They have the worst death rate on the road of any nation, and now they are a a large demographic of our city.

By the way, did you see who was standing behind comrade mayor? Comradess Ditzy Lizzy.

The inmates are running the asylum.

Is she getting ready for the next mayoral primary?

You all voted for him; you got him. Enjoy!

Is she getting ready for the next mayoral primary?"

As I have predicted, Katz will bide her time as a good dem soldieress doing the politically correct thing and then when the comrade de Blasio is forced to resign and comrade Leticia James fills in Katz will step up and become the face of the put upon and abused outer boroughs. She will bemoan the fact that her comrades have failed the city but she is ready and primed for the prime time position as Ms. Mayor.

I see Dizzy Lizzy and Large Marge turned out for the photo shoot. You usually don't see them until election time.

Boy do I miss Bloomberg already. This DumBlasio is such an amateur. He's wasting his time in the morning shoveling his sidewalk when he should be down in City Hall early every morning getting a handle on the city's issues. He has no clue how to handle serious issues or how to engage professionals who are much smarter than him.

He was invisible and did nothing as Public Advocate.
It's a whole new game now Mr. D. The entire city is watching you. Better get used to it very fast.

I thought that when an emergency vehicle comes to an intersection without the right-of-way, they are supposed to (1) slow down, (2) have their lights flashing, and (3) hit their siren - all to warn vehicles traveling through the intersection that they need to pass through against the light, etc. Why can't the Mayor's vehicle do the same thing, providing that it was too dangerous for his car to stop at a stop sign because he was in some kind of imminent danger?

Better than Bloomberg...but Di Blasio is destined to be a 'White" David Dinkins...another example of the kind of mediocrity that kept NYC on its knees for years.