Bowne Park: No garbage there! 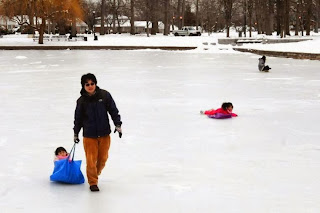 Bags of garbage had been spotted in the park and cans thrown onto the lake. But the Parks Department said Monday that mobile crews clean up Bowne five days a week, with the only snafu the flooded building.

Wanada Beck-Antosh, president of the Bowne Park Civic Association, said she has received no complaints about garbage piling up. “The only illegal thing we see is people skating on the ice, but it’s just a few,” Beck-Antosh noted.

Signs are posted to prevent people from skating, but she said the ice now is so solid that many think it’s safe.

Two nearby residents who enjoy spending time in the park have contacted the Chronicle in the past about algae problems in the lake during warm weather. Sharon Wohlgemuth said Bowne is “really kept nice and clean” and applauded officials from finally solving the algae problem.

Jerry Kaplan, who does not know Wohlgemuth, said he was at the park on Friday and didn’t see any garbage. “It’s not dirty and I have no complaints now,” Kaplan added.

Councilman Paul Vallone (D-Bayside) said Monday he has received no messages about the park and urged residents to call his office if they arise at (718) 619-8611. Vallone added that cutbacks to the Parks Department have affected cleanups throughout the city.

You have to love it when people refute undeniable photographic evidence instead of being concerned about it. And should that guy be dragging his kid across the pond?
Posted by Queens Crapper at 12:57 AM

Wanda does not even own a computer, Nor is her phone # posted on the anemic Bowne Park Civic Assn. (BPCA) site. The only way to contact her is through snail mail addressed to a PO box!

Also - Vallone was contacted the day the original post went up on Queens Crap so perhaps he should check his email once in a while!
His published email address is district19@council.nyc.gov

It's all bullshit - they never hear about the problems because they don't want to know about them - they just want the parties and the glory.

Nothing happened until, once again, QC shamed the DOP(ES) into action.

Our local pols (except Tony) and the BPCA are totally asleep at the wheel!

Crappie, your post got everyone moving and the park was cleaned up.

It's all bullshit - they never hear about the problems because they don't want to know about them - they just want the parties and the glory.
-----
Just like Vallonia.

The community board run "efficiently" by a batch of people the Vallones brought in whom no one knows.

The developers will have a field day.

You will see. It will only get worse.

Keep their toes in the fire. After a while, like in Vallonia, one day they will stand up to talk and no one will bother to listen.

THEN you clean house.

You can bet on that - like brother with $4 million in ce-ment to fill a diving pool and then calling it a performance space: "The Vallone Center for the Arts!"

Ah yes, the wonderful concept of denial, even while garbage strewn photos are in your face!

What? I called Vallone's office personally and said they were taking care of it? A few days later, the garbage was all gone....

Maybe this quote was from before the pictures were on Queens Crap?

I've reached out to Vallone's office more than once, very helpful and friendly. I was very excited that he has introduced a bill in regard to the Rickert Finlay covenant. Wasn't this websites biggest issue vallone over developing NE Queens? So far, the only thing he's done is try to pass legislation against over development.

I suppose time will tell

Speaking of Paul the Conehead, Adam is back from his holiday break and came out with a puff piece on Paulie and his "brilliant" staff.

That's some hilarious shit. "Paul Vallone: Ready To Serve At A Moment’s Notice". I guess the swearing in wasn't notice enough? When is he going to start serving?

"Maybe this quote was from before the pictures were on Queens Crap?"

Blogger Queens Crapper said...
"Maybe this quote was from before the pictures were on Queens Crap?"

The garbage is gone? I know I personally called his office, as well as a few other of my neighbors around the Bowne Park area.

Yes, it's gone, but those in power claim it was never there in the first place.

Crappy wrote:
That's some hilarious shit. "Paul Vallone: Ready To Serve At A Moment’s Notice". I guess the swearing in wasn't notice enough? When is he going to start serving?

When it comes to serving his own interests and the interests of his developer friends, Paul Vallone has been ready since day one.

So now we know what Paul Vallone's priorities are. If it wasn't for Paulie, elderly Koreans might have to east Salisbury steak.

The Queens Chronicle is the true Queens Crap.

Old Lizzy Rhoades Scholar couldn't find garbage in plain sight. Either HER sight is going in old age or all the garbage in Bowne Park ended up in her writing.

The Queens Chronicle is the true Queens Crap...

You're a jerk. The garbage was removed after the Crap Blog post. Duh.