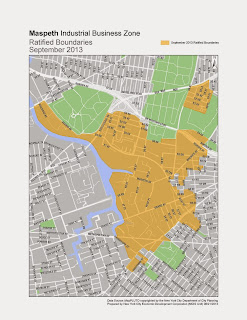 Mayor Bill de Blasio's budget proposal eliminates a $1.1 million allocation for industrial business zones, a decision that did not shock those familiar with the program but casts doubt on the new administration's approach to preserving manufacturing jobs in the outer boroughs.

In 2006, former Mayor Michael Bloomberg designated 16 industrial business zones across the Bronx, Brooklyn, Queens and Staten Island. The thrust of the plan was to keep industrial and manufacturing businesses operating in the city by using tax credits and city funding and to signal that the areas would not be rezoned for residential or other uses.

But the roughly $4 million budgeted that first year for IBZs has steadily decreased. Nothing was set aside in Mr. Bloomberg's final budget, but then-Councilwoman Diana Reyna shoehorn $1.1 million back into the city's 2014 financial plan. The money paid for the Department of Small Business Services to provide consulting for industrial businesses. EDC also has three staffers helping manufacturers, funded out of the agency's own budget.

Many of the program's supporters, including Ms. Reyna, who is now deputy borough president of Brooklyn, are still advocating for the IBZs. "We want the mayor's office to really re-commit to this program," she said. "This program needs an office and a head of OIMB that reports directly to the mayor. The Brooklyn Navy Yard has a wait list for new businesses looking for space. There is interest here."

Responding to that interest and growing manufacturing jobs would seem to be a natural fit for Mr. de Blasio, who campaign on a platform of economic opportunity for working-class New Yorkers. A spokeswoman for the city's Department of Small Business Services said in statement to Crain's that a litany of free services are available to businesses in industrial areas and "Mayor de Blasio's budget reflects his administration's values, which include preserving and growing the manufacturing sector as a key element of his economic development policy."

But by removing the last vestiges of funding from the program, the new mayor is indicating that his administration is at the very least rethinking its approach to industrial business growth. Since Mr. Hum's departure, the responsibilities of the IBZ program have been shared by a number of city agencies, none of which could confirm their number of IBZ employees.


Help Manufacturing Thrive in New York City: Bill de Blasio believes manufacturing 2.0 can be a critical part of the city economy and will build on existing programs to preserve the physical integrity of Industrial Business Zones, stop illegal conversions of industrial areas, and support better infrastructure and workforce development planning. He will replicate the success of the Brooklyn Navy Yard in other industrial areas owned and managed by the city.

So much for that.
Posted by Queens Crapper at 12:41 AM

Acrapella :
Remember the pic of the house on Flushing Ave. and 53rd St. you posted a couple of weeks ago?

Not that anyone cares, but it seems that it falls just outside of the IBZ according to the map.

Pedro and Mr. Li will need real jobs sooner or later. Food delivery and mopping floors can only provide so much employment.

or is it the idea to make Pedro and Mr. Li dependent on NYC Democratic programs for their means - in exchange for votes?