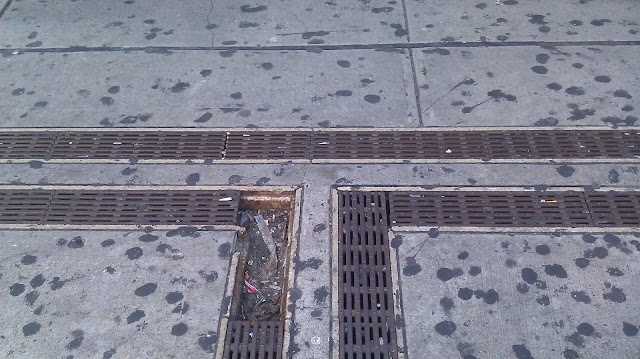 This afternoon I watched as a woman coming out of the escalator exit of the Main Street-Roosevelt Ave 7 train station tripped and fell to the ground.

Her foot had become caught in a 3 inch deep gap caused by a missing section of sidewalk grate just about two feet from the top of the escalator.

There were no signs, cones or caution markers of any kind in the area, despite the heavy traffic that station receives from both commuters and MTA folks.

This could definitely cause someone some serious injuries.

Attached is a photo of the grate."

Let me guess...the grate became a victim of those metal collecting guys?
Posted by Queens Crapper at 12:21 AM

In filthy Flushing, things like this are to be expected as normal occurrences.

Look at all of those squashed chewing gum wads (black spots) on the sidewalk--appearing like the pattern on a Dalmatian dog. We won't elaborate on the unsanitary sidewalk spitting which occurs daily or Flushing's unique "fragrance".

Who really cares what goes on in town? Many are being PAID SALARIES to "care"--but do they?
Are they doing their jobs they way they should be doing them?

Councilman Koo doesn't appear to be doing any heavy lifting. This purported Nassau county resident takes his walks around town--commenting on overcrowded sidewalks, etc. in true photo op fashion. What do we see that Peter Koo has accomplished regarding these quality of life and public safety conditions? I'm sorry to have to say--not very much.

Then there's, Mr. Dian Yu, director of the Flushing BID. The business improvement district team has recently hung a bunch of pretty little flower baskets along Main & Roosevelt. That's what the BID delivers--posies in a puke patch. They are hardly noticeable amidst the clutter of competing signage.

Nice try! Enough with the banners and baskets on the utility poles. Who's going to water and care for these flowers? Flushing is not exactly picturesque Carmel by the sea in California.

Clean up and make the streets safe from all hazards.
That's the ticket if you want my business back in the downtown hub. Until then you've lost it, from many former shoppers, as well as myself.

JERRY ROTONDI, former member of the Coalition For A Planned Flushing, et al.

P.S.
I thought that we were supposed to be ONE FLUSHING--all together and all pulling together--in the bonds of true brotherhood, for a better life.

All that I can see is a fragmented town--divided into groups--and manipulated by political agendas.

I hope this will change in the near future. My days of volunteerism (i.e. personally power washing sidewalks clean) for Flushing are over. Pass the torch please.

Those escalators are usually on the fritz.

Watch as slowly the other pieces go missing. The metal scavengers won't take it all at once, its too obvious. They will take it all piece by piece.

I doubt that these are metal scavengers.
You don't get very much for steel.
Stealing brass is much more profitable.