Does St. Michael's Cemetery have land to swap for parkland? 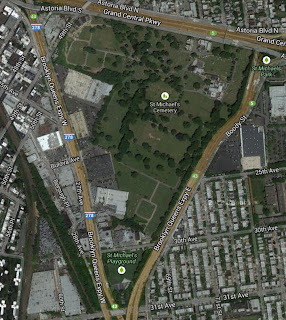 This was passed on by a reader:

TITLE OF BILL: An act to authorize the city of New York to discontinue use of and convey certain park land

PURPOSE: To authorize the city of New York to discontinue use of certain park land and convey it to the St. Michael's cemetery.

SUMMARY OF PROVISIONS: Section 1. Authorizes the city of New York to discontinue use as park land and to convey, in fee simple, the land described in section three of this act to Saint Michael's Cemetery.

Section 2. Provides that the authorization of this act shall be subject to the requirement that the city of New York shall use any proceeds and/or land received in exchange for the conveyance authorized by this act to acquire land, to be dedicated for park purposes in an amount equal to or greater than the fair market value of the land being conveyed.

Section 3. Describes the land authorized to be discontinued as park land and conveyed as the property bounded by Astoria Boulevard to the north, 30th Avenue to the south, the Brooklyn-Queens Expressway to the east, and St, Michael's Cemetery to the west, in the Astoria section of Queens, City and State of New York. The property consists of a 3.77 acre highly irregularly shaped parcel of vacant land know as St. Michael's Park.

JUSTIFICATION: This legislation would allow St. Michael's Cemetery, located in Astoria, Queens to acquire a small strip of park land that is underutilized and in disrepair located adjacent to the cemetery.

St. Michael's Cemetery has agreed to transfer a replacement parcel of land to the City of New York in order to replace the park land acquired and ensure that the western Queens community does not lose valuable green space.

FISCAL IMPLICATIONS: To be determined.


So, where is the replacement parkland?
Posted by Queens Crapper at 12:42 AM

I saw listing that they are clients of Constantinople and Vallone and the fact that their events are given big coverage by the Gazette tells us all we need to know...

Say good-by to the Steinway Mansion.

Can Steinway Mansion be designated as parkland in exchange for the St. Michael's deal?

If I am not mistaken according to NYS law a cemetery can take control of a grave and resell it after 100 years of non-internment or if the grave care is in default for 100 years.

No bodies are to be moved, they wanted to expand.

HOWEVER was at a plot holder meeting about 30 years ago and there was nearly a riot over the cemetery's new management who went in and supposedly covered 'inactive' graves with several feet of landfill and people claimed they could no longer find graves.

Only the ineptness of the public in handling their anger avoided major a scandal.

Also, the rumor has it that the stone trim at Socrates came from St Micheal$.

I think what the commenter was referring to when he asked which bodies will be moved is the fact that St. Michael's is expected to provide replacement parkland under this deal. So if they are full and looking to expand, the question remains what land do they own that will replace what they are taking?

Vallone wants no one from the community except his home boys involved in any major plans for Astoria, and if we believe the CB1 parody website, you can start with making campaign donations to get his distracted attention.

The story going around the neighborhood was that he wanted St Micheals to purchase the Steinway Mansion and swap it with the city for parkland.

The problem is, as with every gonzo Vallone scheme, he needed the cooperation of those outside of Vallonia to pull it off.

Both the Mayor (who thanked Vallone in for helping overturn term limits and promptly forgot the councilman) and the Parks Department thought the ideas nuts and it fell through.

Gives you an idea on what will happen to us when Vallone becomes borough president and he starts to bumble through his hair-brianed ideas for Queens.

Sounds like a lot of Valloni Baloni to me.

We have a winna!

Forgot about Vallone's role in term limits - he is responsible for that mayor and all those problems from him.

If Vallone overturns the public's wishes, that gives you a very good idea as to what he will do going forward.

Hope that comes up in a debate because we know that Avella was against this stunt.

Thanks for using and reusing my handle for the Vallones , "VALLONEY-BALONEY".
That one really stuck, didn't it?

I was glad to be of service.
Let's see if I can cleverly turn a few more phrases, so as to poke any other shady pols in the eye.

And a good morning to you Chuck "follow the buck" Apelian. NO, that one's not mine. Too bad!

I hope that you're not designing Vallone's flyers.
They're pathetic.

Oh, you've just got the printing contracts?
Am I wrong on that?