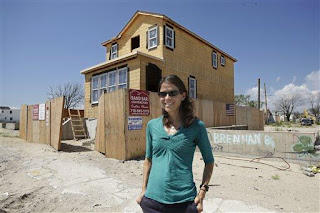 On a desolate stretch of sand and concrete rubble in a beachfront community, a lone home is rising amid the ruins of nearly 130 houses that burned to ashes during Superstorm Sandy.

Nine months after the fire tore through Breezy Point, a neighborhood of tightly packed homes in New York City, this house is the only one under construction in the burn zone, the swath of homes that went up like tinderboxes during the storm.

Rows of rectangular boxes sunk into the sand form a graveyard of wrecked homes. American flags waving feebly from the ground help mark where a street once existed.

"That fire zone is the one scar out of all of this that won't go away," said Kieran Burke, a firefighter whose home was destroyed in the blaze. "These aren't just beach homes. These are people's lives. This is a way of life."

A perfect storm of government inefficiency, cumbersome permit laws and general confusion has hampered the recovery effort in Breezy Point, which became a symbol of the storm's devastation after images of the charred neighborhood were broadcast to the rest of the world.

About 350 of the nearly 3,000 homes in Breezy Point were wrecked beyond repair from flood or fire during the storm. But while many of the flooded homes began repairs months ago, the people who once lived in the fire zone are stuck in no-man's land.

Some homeowners have filed plans to rebuild, but few have been approved by the city or by the Breezy Point Cooperative, which runs the neighborhood.

Some people are battling with insurance companies. Others waited months for the Federal Emergency Management Agency to finalize its newly updated flood maps, which put Breezy Point in a more stringent flood zone with higher elevation requirements. And still more are waiting for the government and the cooperative to approve a long list of permits and plans that stand in the way of starting construction.

If the city can give millions of dollars in tax breaks to developers to build along the shore, then why not these folks? This is true affordable housing.

You are right to point out the hypocrisy, Crappy, but the people of Breezy Point will never have my full sympathy for soliciting recovery funding after effectively trying for so many years to secede from the city on all public services while enjoying other public benefits only the city proper can provide.

if these people were black you would all be screaming to give them everything.

Since this is how the city treats them, can you blame them?

"Since this is how the city treats them, can you blame them?"

Maybe my information is outdated (this is an old article)
http://www.nytimes.com/1984/09/10/nyregion/a-cooperative-on-the-beach-loves-privacy.html

According to this, you cannot buy in Breezy Point Co-op unless you are not only approved by the board but also recommended by THREE co-op members, which, being a whole town, means no one is getting in unless they're part of a "clan", and you know what I mean.

"There's no discrimination there," said one member. Uh, yeah right. Take a look at current census data for Breezy Point.

The city owes my co-op diddlysquat if it runs risklily fails to implement newer safety features. It's something we are do because we don't want sky high insurance rates. In this article you posted the BPC itself is stingy with the rebuilding approvals for the same reason. So again, why does the city owe these people funding for high insurance risk repairs? Insurance means you collect on the policy. It's not an entitlement to rebuild. I hope the BPC was well-insured. But no one will underwrite part of the old community, then that's it. Why should the working poor have to subsidize these people's little club through subsidies?
Suddenly the people saying ''Why should everything be public?'' ''Everyone's entitled to privacy. ''We don't want any outsiders coming in'' (see above NYTimes article) are now crying for FEMA so that they can continue to robustly run their private beaches, no parking peninsula and keep the rest of us out.

Electeds are too busy right now. Don't bother them with Sandy problems. Maybe after the election , Sandy victims will appear back on the radar screen.

I'm sorry to say this,
but homes on the beach are pretty much like sandcastles.