Will the real Bill DeBlasio please stand up? 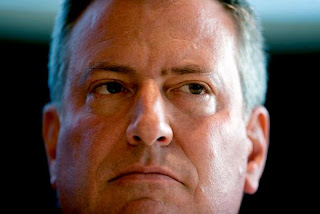 From The Daily Beast:

In 2004 de Blasio was a paid adviser to John Edwards’s presidential campaign. And in this year’s mayoral race, his rhetoric about “a tale of two cities”—a line he has used to critique growing income inequality—has echoed Edwards’s rhetoric from 2004 about the “two Americas.” Yet while serving on the City Council, he frequently found himself on the wrong side of progressives in his district (admittedly not hard in ultraliberal Park Slope) and was sometimes blasted for favoring developers and real-estate interests over community concerns about congestion and quality of life.

For example, he sided with a developer in opposing the designation of the Gowanus Canal as a Superfund site—even as nearby residents said that the city was ill equipped to carry out the cleanup on its own. He pushed to allow luxury housing in Brooklyn Bridge Park. And he was one of the primary backers of the controversial redevelopment of Atlantic Yards into a basketball arena for the Brooklyn Nets—a nearly decade-long fight that pitted local residents against powerful real-estate interests.

De Blasio’s most important maneuver has been to capitalize on liberal frustration with Mayor Mike Bloomberg.

“He said that it was necessary to stop the tide of gentrification, but everyone knows this was the most gentrifying thing to ever happen to Brooklyn,” says Lucy Koteen, a local political activist who backs current City Comptroller John Liu. “He is not wrong about the ‘tale of two cities.’ But look at his record. Did he help level the playing field, or is he on the side of developers who have gotten rich displacing people?”

One of those votes was to approve Extell’s West Side tower that includes a “poor door” separating subsidized tenants from those paying market rents.

A de Blasio spokesman said the rep actually fought “the poor door,” but Extell found a way around her objection.

Capital New York has a good wrap-up of his development stances in the past.
Posted by Queens Crapper at 12:23 AM

He'll be the Tower of Jelly II.

Working in the Dinkins administration disqualifies him immediately.

At least lip service to the rest of us is better than Quinn/Bloomberg saying you are getting screwed and you will enjoy it.

I'm not voting for him.....he wants to reward the illegals in this city!