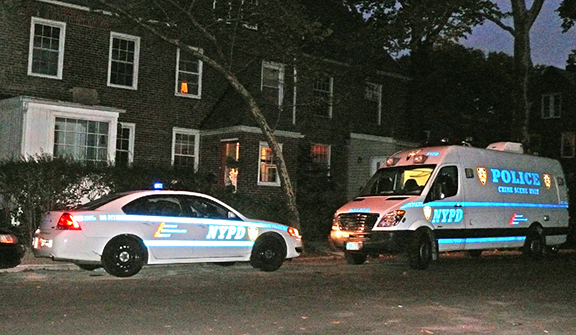 "Friday, between 4pm and early Saturday am, there was a break-in at the home of Dan Hendrick and Council Jimmy Van Bramer in Sunnyside Gardens, Queens. According to police at the scene Saturday morning, the intruder came in the front door and went out the back. The back faces a common court with 47th Street and 39th Avenue, so one could escape from another direction than the street entrance used to enter the premises. The house is located in the 108th precinct.

Plain-clothed detectives combed the neighborhood today, knocking on doors to find out if anyone saw anything out of the ordinary in the time. The detectives were called in from other precincts in addition to those of 108 Precinct. They did not reveal if anything was taken.

There is currently a 24-hour surveillance in process, and a fingerprints expert, clad in a white jumpsuit, from the onsite Mobile Crime Scene vehicle, was there Saturday evening taking a thorough inventory of fingerprints from the house.

When we asked whether the door had a Medeco or other lock, the officer said, "I'm sorry, but I cannot discuss an ongoing investigation."

The 108 Precinct which includes an large area of Western Queens, is among the precincts city-wide with a low rate of crime." - anonymous

There's more of the story at Sunnyside Post.
Posted by Queens Crapper at 12:33 AM

Tsk, tsk tsk, and this crime happened within the historic district.

WOW! Sunnyside Watergate!
Maybe it was a Republican party break in by the "plumbers" to get the goods on Councilman Jimmy.

Did they use a Jimmy to force the door, or did somebody Scotchtape the latch open?

Nothing "Funny" here. Unless it's happened to you. You'll never know the feeling...

And you will receive the same courtesy, professionalism, and respect from 108 Pct. that Van Bramer does.

Where were they vacationing? Amagansett? Key West?

Is SWAT team next? Elite cops are knocking for the 3rdtime, 24-surveille,& super expens CSI. Officials get more attn, but buy an alarm and take pro-active measures like the people paying the bills of theNYPD and Mr. Van Bramer.

What's CB 2 chair Joe Conley got to say?
Is he too busy kissing developers' asses to care?

Isn't he himself a developer?

Is this bad karma kicking Councilman Jimmy in his butt for his standing by slumlord Jerry Wolkoff (owner of the 5 Ponitz site)?

I say Jimmy is getting well deserved karmic payback.
No sympathy here.

I bet its the last time he notifies thousands with an email about his birthday.

So Jimmy has gotten violated just like the way he's been violating his constituents in favor of siding with over development in LIC.

I'd say that what goes around comes around.
That's the way the cosmos balances things out.

"Look at what those brutes did to my evening gown".

If he had a strong front entry door, the break in would have been foiled.

But, alas, these tasteful multi paned French doors, are easy to bust in or force open.

Every time that Councilman Jimmy farts he sends out an e-mail announcing it.

You're right. He's a publicity glutton!