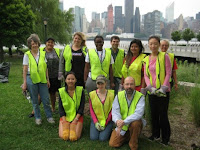 The non-profit group that has been doing much of the gardening and landscape work at Gantry Plaza State Park for the past 15 years is in serious decline.

The group’s membership continues to dwindle as its long-serving volunteers grow old and newer residents failed to join. Membership has halved since its inception and if current trends continue the organization will soon no longer exist.

Nevertheless, next month the Friends of Gantry will be celebrating its 15th anniversary at Riverview Restaurant (details below). The organizers hope that the event will help them recruit new members and raise funds.

The group, in its heyday, was formed shortly after the state completed the first phase of Gantry Plaza State Park in 1998, which at that point was just a little over 2 1/2 acres in size, a fifth of the size of what it is today.

Today, the group has about 30-members, which consists of about 10 core members.

And this is Julissa Ferreras's bright idea to fix up Flushing Meadows?
Posted by Queens Crapper at 7:54 AM

It is SO hard to get volunteers for ANYTHING . . . used to be retirees were a good source of people-power, but now we expect workers to stay on the job until they drop dead, just about.

As budgets are cut, reliance on volunteers can only increase.

I propose something akin to the Family Medical Leave Act, allowing time off for documented volunteerism, giving employers a tax break... SOMETHING!

This is what happens when you have a policy of hollowing out community - owner occupied housing, quality of life, people with a real stakeholder in an area.

Instead, the politicians have sold themselves, and their communities, to developers.

Luxury housing for transients may not pester a pol like a third generation home owner, but you can be assured that the latter will do the most for their community.

NYC does not need a new million. It needs community building.

The volunteers are probably non-tower people who are gradually getting priced out of LIC.