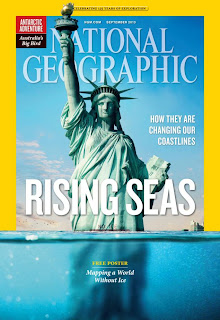 Based on projections from the National Weather Service and the U.S. Army Corps of Engineers, if a storm equivalent in strength to Hurricane Sandy were to hit the five boroughs in the year 2100, vastly larger swaths of the city would be submerged.

The reason is simple. Sea levels are forecast to rise by as much as six feet before the end of the century, making low lying cities like New York all but defenseless to the wrath of powerful storms.

Unfortunately, over the past decade, scientific projections on sea level rise have grown rapidly as more data on climate change has continued to be analyzed.

Six years ago. the Intergovernmental Panel on Climate Change (IPCC) estimate that by 2100 sea level would rise by a maximum of 23 inches. In a draft of this year’s report, the final version of which is to be released this fall, the IPCC revised that outlook to a maximum of six feet.

But not to fear! The City has opened a water-resistant park at the edge of LIC, which is the only neighborhood in Queens that matters anymore.

In a post-Sandy city, the first question that comes to mind with new waterfront developments is "how did it fare during the storm?" Hunters Point South, it turns out, fared very well. "We were surprised at how well the water drained," said Manfredi. "We always anticipated that there would be a major storm." Every part of the park is design to take on water. After Hurricane Sandy, all of the major surfaces were undamaged and intact, and most of the trees survived because all grades in the park were calibrated to accommodate storms, so the tree roots were protected.

No mention of the contaminated river and creek water that bathed Hunters Point.

Oh, and the trees survived because they weren't there yet. In fact, none of it was there on October 31, 2012. The satellite imagery proves it.

We'll see how well this area fares after the next 100 year storm, which, according to past experience, should be happening any day now...
Posted by Queens Crapper at 12:14 AM

This is East River sewage, Newtown Creek hydocarbons and metals, and seawater that just was pushed up from the Jersey Coast.

Trees on Roosevelt Island were killed by the salt from the storm.

Good !
Id rather see taken over by the fishes then wants taking over now !

The National Geo is a pant load.
To have the sea rise to the level depicted on the cover the sea would have to rise 214 feet.

The tide gauge at the Battery has been showing a rising tide of 2.7 mm/year since 1850 and it's not accelerating. That's about 1 inch per decade.

To get to the level depicted on the coder it would take over 20,000 years.

I don't know about NYC being underwater in the end of the century.... but I do know this....that if everyone had to evacuate nyc in a hurry, half of us would not get out alive because there are way too many people in this city.

However the tides ARE rising at an accelerating rate. Not much now but in the not too distant future it will very noticeable. Just ask anyone you know in Miami or N Orleans

The waterfront is not only increasingly endangered, but it is polluted with industrial waste from generations.

NOT the place to raise a family.

The Nat Geo cover might take a thousand years but it did get your attention.

BTW - this year has been the slowest hurricane season in decades, arctic ice is up 69% from last year and 2013 has been the quietest tornado year on record.

Being an active kayaker and sail boat racer I spend a lot of time along the coast of New England. From Newport RI to Eastport ME I can tell you the coast is clean and beautiful.

Don't believe the environazi global warming freaks. They've been proven wrong again and again and again and again. None of their ridiculous predictions have ever panned out. They're nothing but anti-American neo-communists who needed a new cause after the end of the cold war. Just a little research will show you how full of it they are, and a lot will make you an expert on their lies.

Anon #3 - you actually thought that cover was supposed to depict reality? Get your face out of the computer it took you to calculate those measurements, and notice a little artistic license.