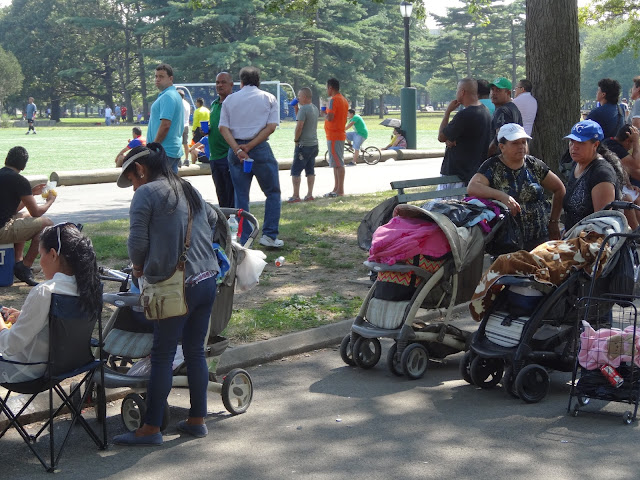 The city is losing millions of dollars in revenue annually from illegal vendors while the Bloomberg administration does little to combat the problem.

In Flushing Meadows Park it's a wild wild west, cat and mouse game as dozens of illegal vendors work openly in the 900 acre park. Women pushing "invisible babies" do brisk business selling alcohol from covered baby carriages, beer is hidden in sewers to avoid detection, while others sell food, ice cream, drinks and snacks and toys.

Licensed vendors say they can not compete. In Flushing Meadows Park alone ice cream truck concessionaires pay the Parks Department up to $ 32,000 annually in addition to Heath Department fees, liability Insurance, and in the case of Mr. Softee - a $ 3000 annual franchise fee, on top of the $ 85,000 - $ 120,000 required to purchase the trucks.

Mean while illegal vendors sell from make-shift home made push carts, baby carriages and bicycles that by-pass permits and insurance.

Legal vendors also note that the Parks Department sets the prices they are allowed to charge while unlicensed ones are not under the same constraints. Some legal ones have been forced to lower prices in order to try and compete.

Critics also point out that park patrons being allowed access to unlimited amounts of alcohal is a concern for getting behind wheel to drive home.
Illegal vendors take away revenue not only from owners but also from the workers who's salaries are often based on a percentage of what they sell.

Some vendors say they are under the constant threat of violence from illegal vendors while the city does little to protect them. They say you are lucky if law enforcement occasionally conduct sweeps and confiscate illegal items but nothing is constant and certainly there is not a permanent uniform presence needed to deter this activity.

Legal vendors say they constantly complain to the Parks Department's revenue division - who oversee the agency's vast array of concessionaires but their concerns fall on deaf ears. They complain that the city refuses to protect them while being told there's nothing they can do because they don't have the resources to address the issues.

There is not a single dedicated Park Enforcement Patrol (PEP) officer permanently assigned to patrol 900 acres of FMCP, the largest park in Queens.

I'm sure Holly Leicht of New Yorkers for Parks and Council Member Julissa Ferreras will suggest another conservancy to take care of this...

But seriously folks, it's become much easier and more profitable to do as you please rather than follow the rules in this town. What is the fine for illegal vending even if you were unfortunate enough to get caught?

I urge you to click the link at the top of this post and read the whole story. Illegal gambling, hiding booze in storm drains, legal vendors being harassed and told to vacate the park during the US Open - when they would likely make the most money. It's simply amazing what goes on in our parks. And no one does a damn thing about it.
Posted by Queens Crapper at 12:34 AM

Take a stroll through Flushing Meadows Corona Park, and you might think that you're really walking through a 3rd world country.

You might even wind up getting robbed or raped.

Where is the park enforcement? H-m-m-m-m-m!

It looks very much like services are deliberately being denied to FMCP, in order to convince the public that the USTA expansion will tame the wild west practices that are going on.

No surprise here. NYC can be really bad about enforcing certain laws. The more NYC does not enforce laws the more people will continue what they are doing. Enforcement, half the battle.

It's different rules for Queens. Arresting these illegal vendors would be unpopular in the community. In fact, fee-paying vendors and taxpayers in general are regarded as the chumps - too stupid to exploit "the system".

If you are an illegal yourself, is getting a ticket for selling a churro really your biggest fear?

Walk around in the park on a weekend afternoon and you'd think you were in a Mexico City slum.

Kids peeing behind trees, open BBQ,s open drinking, roaming groups of male teens, cars driving the paths, not a cop or a park ranger to be found.

When is he going to be stopped? I thought it was against the law to sell anything on the train and platform. This man operates after 9:30pm and between Fulton Street and Rockaway Blvd sometimes as late as 1:30am. He is pulling a suitcase on wheels and carries a black plastic garbage bag full of dvd's. He usually wears a white t shirt and pants that go to his ankles.

It would seem that there's two sets of laws-one for the law abiding. the other for blacks and illegal immigrants.

If they had legal vendors like Bryant Park, they would keep the rifraf out toprotect their investment

They DO have legal vendors at Flushing Meadows. Read the article.

Incredibly, its the licensed vendors who are hated in Flushing Meadows park and the illegal baby carriage vendors who do all the business. Isn't a travesty that licensed vendors pay the city but can't get protection from illegal vendors. Where's the mafia when you need them.

NO please don't enforce the laws! This is Queens! VIBRANT! DIVERSE! Someone might get offended!!

Where's the Queens Parks Commissioner? On vacation again, I presume.

The woman who walks junkyard street with the baby carriage has the best cold beers, soda and water.
I had 16 oz Bud as I was getting my 68 Satellite's headers and exhaust welded up.
Nothing like an Ice cold beer when in 90 outside. I gave her a $3 tip. It beats walking to the Bodega on 111th & Roosevelt.
The park really needs it litter baskets emptied and more of them. You can see week old newspapers in them !!!

Illegals as illegal vendors serving illegals - a sad commentary on what is the norm these days. I am going illegal to benefit myself too!

I asked and was told "no for sale".
They give you the water, soda whatever and YOU put $$ in a tip can or the girls boot that say "tips"

so then whats the appropriate action/escalation plan to fix this problem in our community?

I took my kid to the zoo recently and there were people setting up a tent with BBQ grills and coolers right in front of a "no grilling" sign (or something along those lines). Are these signs posting laws that are to be followed or merely suggestions to those of us who still believe in following rules? I think you can figure out what the ethnicity was of the people setting up this tent.