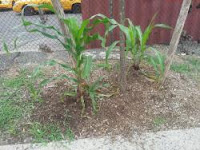 Corn is growing in leaps and bounds on a sidewalk in the Dutch Kills community in Long Island City. The crop is blooming beneath some newly planted city street trees on a stretch of grass along 30th Street between 39th and 40th Avenues – beating the odds by having survived the blistering July heat wave. If you look closely, you can see almost a dozen small ears of corn among the stalks – yet another sign of growth in the community that proudly displays a stone from a local gristmill, dated to the early 1600s at its “front doorstep”, at Queens Plaza.

Who planted corn in a city tree pit and how long do you think that will last, especially now that it's been spotlighted in the newspaper?
Posted by Queens Crapper at 1:15 AM

From the looks of that corn it was planted to late or is severely nutrient starved !!

BTW: Sweet corn is $6 a dozen all over Southold right now..and its awesome this year.

You would be surprised how corn ends up growing in tree pits. If there are food vendors / street fairs selling roasted corn on the cob, throwing the cob into a tree pit will eventually yield a small harvest of corn, under the right cinditions. I see the same occurrence in Sunnyside, Corona, and Forest Hills where there are a number of street vendors selling corn.

I've even seen corn sprouting in the most unlikely tree wells in Manhattan. It's a symbolic living metaphor of faith. We've all got to learn to be as resilient as corn to survive in the big apple.

Don't think anyone, except George, thinks the milstones should be in Queens Plaza. EDC, Parks, you name it have some serious private reservations on the idea.

One of the families that watched over it for generations are telling everyone how 'disappointed' they were in the trash-filled over-grown farce the "Green" has become.

Rumors that they might have been grafittied, and front page coverage of a big chunk that fell off last spring completes the picture.

Was the wrong person consulted whose 'in over his head advice' just pissed away millions of your taxes?

it's $2 here in metro west around Boston.

NYC folks need to see what the cost of living is in the rest of the country. You are getting ripped off.

Some rentals in Patchogue have corn and tomato bushes for landscaping in front yards.