City not making as much in fines 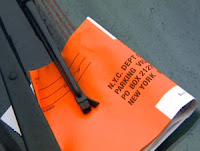 There are dozens of ways New Yorkers can get fined by the city — failing to clean up after your dog, not bundling up your magazines on recycling day and, of course, parking your car in the wrong spot.

Sometimes, irate residents seem convinced the city is trying to balance its budget by catching them committing minor infractions. But according to a blog post by the city’s Independent Budget Office on Tuesday, the Bloomberg Administration is actually hauling in less money from fines than it did a few years ago.

The city estimates that fine revenue will total $812.5 million this fiscal year, which is up about $13 million from last year. However, the 2013 fiscal year, which ended June 30, was an an anomaly because in the aftermath of Hurricane Sandy, the city suspended some parking rules and rededicated parking enforcement officers to direct traffic instead.

This year’s estimated total of fine revenue is about $42.5 million less than what the city collected in 2010.

Believe it or not, however, not all fines are money-makers for the city. In a 2003 report, the IBO found that only parking tickets generated more money than it cost to enforce regulations and collect fines.

That's because the ECB dismisses a lot of fines, especially for developers. A building inspector could probably make enough money for the city in fines in one day to pay his yearly salary. But when $10,000 fines are regularly dismissed by ECB, that becomes unachievable. But it's funny how residents can seem to never get a parking ticket dismissed.
Posted by Queens Crapper at 12:08 AM

That's because most of the people who drive are foreigners! Do you really think that foreigners care about tickets or fines or housing violations? And nyc wants to give illegals licenses? Good luck with that one!!

Fines are like eating your seed and eggs. They destroy everyone.

The $10 and $20 thousand fines are DEFAULT penalties. I don't think there are ANY ECB fines that are that high at the base-level...