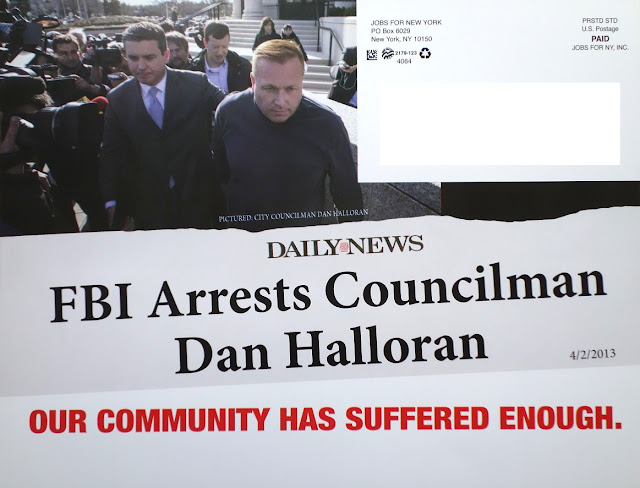 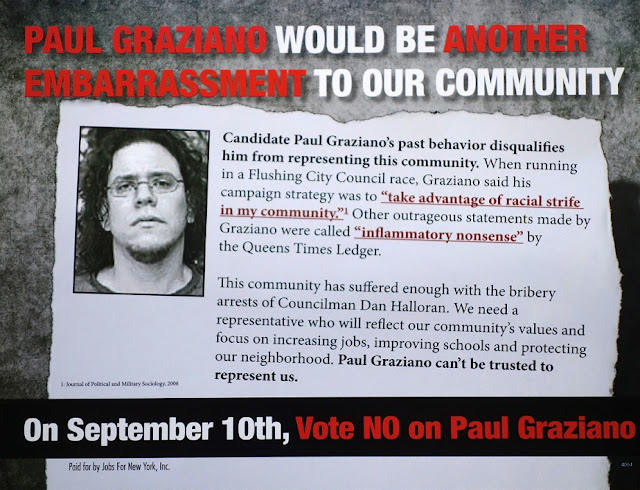 Racial strife? Paul Graziano is not the one going around telling whites to vote for him to prevent one of the Asian candidates from getting the seat (there are no Asian candidates). That would be Paul Vallone. BTW, the "inflammatory nonsense" refers to Graziano's statement during a 2001 debate vs. John Liu where he pointed out that Liu's campaign contributions were not reflective of the racial makeup of the district at the time.

All people in the district have been saying today is how cowardly and desperate Paul Vallone is to send out a mailer like this under "Jobs For New York" instead of under the name of his own campaign.

Someone is VERY afraid.
Posted by Queens Crapper at 6:20 PM

Anyone see Henry Euler's letter to the editor? Vallone is really going to regret having the support of REBNY and Jobs for New York.

"Jobs for New York" has nothing to do with jobs for New York. It is a group of powerful real estate developers, banks and corporations who are just trying to push their agenda and are backing puppet candidates so that agenda can get completed. They are a low rent Koch Brothers PAC. Read the NY times article: http://www.nytimes.com/2013/05/31/nyregion/business-pac-plans-a-push-in-city-council-races.html?_r=0

That unflattering photo of Graziano has already appeared (twice) on Adam Lombardi's blog. But I'm sure that's just a coincidence.

who is Henry Euler ?

Euler is the one that Vallone lied to when he said he had to make funeral arrangements for his client.

Although I think the flood of candidate mailings every day might save some jobs for the Post Office, and maybe the printers. I wonder if any of the candidates are using Nussbaum's Multi-Media to handle their mailings - that might help some of us decide whom not to vote for.

I mean, it is a photo of Graziano, isn't it? He looks a little zonked, got that lefty liberal whacked out look. What could we be dealing with here folks?

Is that the best they can do to expose Graziano? Why don't they just shame him for protecting our parklands, fighting all those developers who violate our zoning laws, developing the zoning we all enjoy. Shame on you Graziano because we have the strictest zoning laws in NY now developers can't put a 6 story building next to our homes. What a load of Valloney Balloney. This District would be lucky to have a crusdaer like Graziano. Vote GRAZIANO!!!!

I've known Paul for about 8 years. I've never seen him with a beard. How old is this photo? And he is a musician, so what's the big deal anyway?

Sounds like SOMEONE is a little jealous that Graziano has long, luxurious hair.

In fact, Paul Graziano has more hair on his head than the three Vallones - Paul, Peter and Peter Sr. - combined, unless you count hair plugs and one of the worst rugs ever to rear its ugly head in New York City politics.

Anon No. 8: We're dealing with an old picture, published by some truly desperate people. What did Paul Vallone look like before his hair went the way of all Vallones? You guys in the county organization mist be really scared.

I'm voting GRAZIANO for sure now. Screw these desperate bastards !
What a posse, I cant even imagine what this Vallone mob will do if elected into office.
Sadly I think Queens have to many stupid voters that don't read. These people never learn and will likely elect Vallone.

Yes, and what could be even worse, is if Peter gets into Boro Hall! ~ now that Tony Avella is no longer running. Sigh...

Graziano's EXCELLENT TRACK RECORD of protecting the QUALITY OF LIFE in our neighborhoods speaks for itself, despite this Vallone HOODLUMS' current hit piece.

Here we have another thick slice of rancid VALLONEY-BALLONEY on mouldy bread! I wonder...did Chuck Apelian's company get the printing job?

Take a gander at what La Famiglia di Vallone has done for Astoria?

Aye, there's the proof of their mob treachery. It's overbuilt and under served.

Would you like to see the extension of Astoria-Vallonia spoil your neighborhood?

Now more than ever, vote for the other Paul...GRAZIANO!

If Valloney Balloney get elected we are in big trouble. Tell your neighbors and friends to VOTE GRAZIANO!!!!!

I think this is a VERY cheap shot at Graziano.

He certainly must represent a THREAT that is scaring most likely the Vallone camp.

Fact: Graziano has done much to help this council district

Fact: Vallone has not

Shafran's campaign has hit back with a mailing that attacks voth Vallone and the developers' PAC that is supporting him. And Shafran's campaign put their name on it, rather than hiding behind a straw organization.

it seems that shoran spening his money to attatck Vallone will help GRAZIANO.

This is why I laugh when trolls like Adam Lombardi insist Vallone is a stand up guy and family man with traditional Catholic values, This proves what a cowardly thug he really is.

Graziano looks like a hot rocker in the photo - I love men with long hair . . .

The Koch Brothers...they like it pronounced "coke"...but the REAL Germanic pronunciation is "cock".

It only goes to show you what little pricks they really are supporting this real estate industry run group.

Once again my fellow voters...Paul Vallone is really scared! YOU have THE POWER to sink Don Paulo.

His devoted cultist follower, Adam Lombardi, will go down with the Vallone vessel.

This (s)hit piece shows up PV for the frightened loser that he really is.

Not having a sound platform or track record to run on...Vallone has got little left to do, but flail his weak arms wildly in the air...attempting to feign strength.

He's already shot a huge wad of his money, compared to the percentages that the other candidates have sent on their campaigns..

More simply put, Paulo Vallone is an outsider interloper, who is trying to push his brand of crap governance in the northeast.

Everyone in the nabes knows this...and how the political mafiosi, La Famiglia di Vallone, has been shitting all over Astoria for years!

Ride the lying SOB out on a rail in the primary.

LOL!
Anyone standing alongside Adan Lombardi looks like a stand up guy to him. How tall is Adam...about 5'2"?

If Graziano has dreams of holding political office he should keep that picture in reserve, it already looks like a mug shot.

Who wants to wake up one morning in the middle of Astoria? Not me. Vote GRAZIANO!!!! He's the only one with the guts to stand up to the cockroaches trying to overdevelop and ruin our community.

Who wants wake up one day having to call Vallone's district office and have a dwarf answer the phone?

Lombardi can at least be trusted with answering phones and going for his father image Paul's coffee.

It's Don Paulo, the privileged brat and his followers, that are the ones fantasizing about holding political office.

Look at the very low R1-2A density zoning (equal to Riverdale's) that Graziano already helped get for our district. It speaks volumes.

The choice should be simple.
Vote Graziano. Keep Vallone's mitts off of district 19!

Or else start looking to move.

When I order a nice prime rare roast beef on rye, I don't want to be handed a cheap Valloney-baloney sandwich in its place.

Shafran maybe has figure out its best to help GRAZIANO by attacking Vallone cause Vallone voters are not voting for Shaffran, they are voting for GRAZIANO.

"Vallone, who was not there to answer the question, received a total of $113,134 from political action committee Jobs for New York, which is backed by the Real Estate Board of New York."

Shafran might win out over all.
Don't underestimate his pulling power.

LOL!...RE Shafran's pulling power.
Yeah he tugs his wand. It's attached to his ego.

Paul Vallone may be scraping the bottom of his campaign piggy bank...but the PAC that supports him have a Fort Knox worth of $$$$$$$$$$$$$$$$ at their disposal.

Then there are those PAC paid labor union mercenaries...the mason tenders, carpenters, etc. who support the real estate development industry. Come election day, they'll be out in the field in force.

"Hail to Vallonia, my own true home".

Yeccch! What a pair. What a thought!
I'll never order a shrimp cocktail again.

Some might consider PG's photo a a trifle dorky looking...but so is my ancient high school graduation photo.

How old is this flick which Adam Lombardi has been using of Graziano?

For his service to the don, our smiling dwarf will be put on the Vallone welfare payroll somewhere.

What other kind of job can Adam hold onto, besides a minor patronage position under his da-da's wing?

This isn't Sparta.
La Famiglia takes good care of its runts too.

Shafran has been endorsed by most, if not all, of the NYC municipal unions, including the UFT (teachers) and PSC (CUNY faculty) - so don't underestimate the fact that they all vote, and they work the phones and knock on doors. They knocked on my door a few days ago.

Austin is the new Kevin

Just for the record, Halloran was arrested not convicted and has stated he's not guilty. He was a lousy councilman but that's still not a crime. Why the smear job crappy.

AskPaul Vallone why the smear job.

I always thought Vallone was a a somewhat decent guy but the way he is attacking the other candidates is so low and dirty and cowardly using "Jobs for NY" to hide behind. It is clear he has nothing but venom and hatred inside. I love a juicy political scandal as well as the next guy but Vallone has taken all the fun out of it and replaced it with putrid acid. He's a dirty player. Any Vallone supporters need to ask him, why the dirty campaign? Can't he win on his merits? I guess not because he has none.

I have to say, for starters, I'm a John Duane supporter. He's a decent man who understands gov't and is competent and honest enough to do the job before him.

But, if we're being honest here, what exactly about these mailers is inaccurate? Austin Shafran was a blind loyal aide to one of the biggest crooks in the history of NYS politics (well-known before the scandal with Halloran) and Chrissy turned a blind eye to her boss while he was screwing his 22 yr old staffer and making deals with Malcolm on the side.

Graziano hasn't really done a damn thing and those comments were pretty week. But honestly, Shafran and Chrissy are scumbags.

The best qualified candidate in this race is Dennis Saffran, who will be running on three lines (and if Vallone hopefully loses--possibly 4 lines). He lost to Avella in 2001 (who had run twice before and admittedly had better name recognition)by less than one per cent of the vote. He has been active in civic life, ran an anti-crime quality of life group, sent two kids to NYC public schools who are now at top-rate universities, and his wife is very involved in Douglaston civic life. Vallone is a sham; I just hope the voters are smart enough not to buy his BS!