Ladies and gentlemen, in light of the following, it's hard to imagine any elected official (who is not on the take) being in favor of handing over more parkland to the USTA. If they don't actually need it, why should we give it to them? - QC

"I am Robert LoScalzo, a resident of Queens. I'm opposed to unnecessarily sacrificing even more parkland to the USTA. I am very concerned that you may not be aware, that USTA is perfectly capable of renovating its facilities while keeping within its present footprint, and NOT expanding onto even more parkland.

So if you're in favor of creating construction and trade jobs, those two reasonable options would absolutely do so, and would also satisfy USTA's desire for new, state-of-the-art facilities – without further encroaching into Flushing Meadows Corona Park.

USTA's self-serving conclusion is that rebuilding within its current footprint is not acceptable to USTA.

To increase the width of a walkway inside the tennis center, to provide a more luxurious experience for tennis people during just two weeks of the U.S. Open. If that walkway really isn't wide enough, U.S. Open fans would have testified at the public hearings in support of widening it. They haven't. Solving a non-existent problem two weeks out of the year does not justify sacrificing sacred parkland

The impacts of those people are very significant.

A very large number of them will travel by car, taxi or limousine. Here are two photographs showing the effects on Roosevelt Avenue during the 2012 U.S. Open. Two entire lanes are coned off – one in each direction – to accommodate drop-off and pick-up of tennis people. 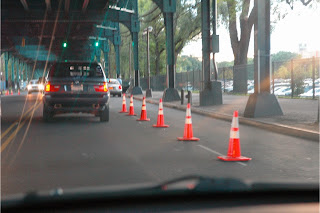 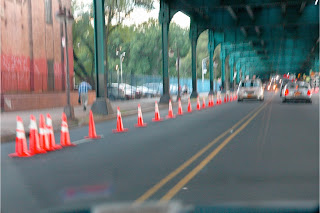 This situation is already very bad – but USTA wants to attract another 10,000 people here per day? By the way, these conditions on Roosevelt are right next to the proposed site of the Mets mall in the Citi Field parking lot – which would be the largest mall in New York City. How can you reconcile commandeering Roosevelt Avenue like this, with the simultaneous traffic to be generated by a huge mall, right here?

The prestige of the U.S. Open is already well established. It does not depend on whether 10,000 more people attend it.

This USTA proposal, like the two others that impinge on our park, areefforts to close deals on parkland while the Bloomberg administration is still around to sign the papers. Please do right by the people of Queens: Tell USTA to renovate within its existing space, and reject its self-serving application to expand its size and its impacts.

(excerpts from the EIS available here.)

On top of all this, the Borough Board, which does not have to weigh in on the USTA expansion under the rules of ULURP, plans to take a vote on the matter and make a recommendation Monday despite not holding a public hearing, which is required.

The information in the USTA's EIS directly contradicts Danny Zausner testimony from February 18 when he stated, “We can't physically replace these two stadium without taking this asphalt strip and turning it into a landscape buffer."
Posted by Queens Crapper at 12:53 AM

A public hearing on the ULURP was held at last months CB-7 meeting & at the other Community Bds affected. At tje Public Hearing it was explained that they are moving tennis courts down around 20 ft on to a paved road from the Worlds Fair as opposed to green park land that is being utilized. If they didn't do this, that .6 of an acre would not benefit the genetal public as useable parkland & could not be developed into anything else, it is just a road. I also saw cones set up like this in the same place this past Friday when I drove past there around 4 pm, there was a Mets game that evening.

Doing the dirty work behind our backs:

Any similarity which exists--between the attitudes and behavior of the USTA, the community boards, Mayor Bloomberg, certain politicians, etc. and the despotic leaders of totalitarian nations--are purely coincidental.

OR ARE THEY?
We taxpaying voters are getting screwed "doggy style"!

USTA generate traffic for the US Open for 2 weeks - it pulls in lots of $$ for the City in so many ways. Aside from that, the money and it's facilities are used to promote the sport of tennis in the US to our youngsters as well as adult players. The facilities are open to all and have cheap children tennis camps for local and tr-state residents. It's not a rich person's country club, but rather a serious tennis player's venue with the best instructors and perfect for developing in children/teens to be tomorrow's champs!

First commenter misses the points, or is spinning.

The parkland property that is at issue, if the application is approved, will become part of the property within USTA's gated community, behind the gate and eliminated from the contiguous park where it is now. That is the case, regardless of whether it has green grass on it, or pavement. Furthermore, if a road is to be consumed by the proposed project, then it stands to reason that the road will have to be rebuilt, further into Flushing Meadows Corona Park. Even if the USTA land grab only directly acquires property that is a road, the re-routing of that road is going to delete green parkland.

This USTA application has seen it all:

CB3 attempting to hold a secret meeting to discuss, and even lying to the public about it;
Kelty & Apelian lobbying other community boards to approve;
USTA refusing to publish their project presentation online;
Helen Marshall prohibiting State Senator Tony Avella's representative from reading a statement in opposition;
The Borough Board voting without the required public hearing.

If that is the tip of the iceberg, we can only imagine what's underneath.

You make sense, but the other 3 million Queens residents will not support you.

And most of those will cut you neck for a handful of coins from the tiny group of movers and shakers that govern this benighted place we call Queens.

The pathetic few after all this redacting will not make a difference.

Before you post comments, you really should read the article.

The opposition to the expansion does not take issue with kids learning tennis. All of that can be accomplished within the USTA's current footprint, according to the USTA's own EIS.

But those who oppose the expansion have already debunked your tired false claim that the facilities are cheap. Any time after 8 AM, or 6 AM on weekends, the courts are anywhere from $40 - $66/hr. Meanwhile, courts in public parks are $15/hr.

Look folks, the bottom line is that the USTA can build what they want to build right now without taking additional land from the park. Yet instead of being told to do that, CB members and politicians are bending over backwards to accommodate alienation of parkland. WHY???

Those CB members and polls are getting perks from the USTA for bending over. Why else would the do it?

Jack Bitterman, husband of Marilyn CB#7's district manager, is said to get free passes to the US Open from the USTA (admittance to the VP tent with free food included).

And everybody knows what a "fressa" Jack is, if you've ever seen him tagging along with his with his wife, to public events.

I'm no fan of the USTA or the city government, but anyone who drives through that area during those two weeks and doesn't work at the Casey Stengel Yard is a complete idiot.