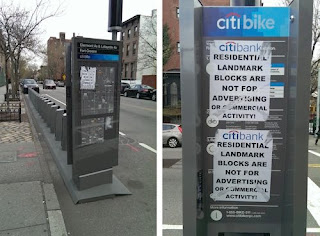 Anti-corporate messages have appeared on Citi Bike stations in Fort Greene and Clinton Hill, and some Brooklyn residents are calling for removal of the stations on the grounds that they are inappropriate in historic neighborhoods, or that residents were not consulted about the locations.

Interesting point, they are hideous to begin with and really don't belong in an historic district, but do these folks really think that the plan would come before the LPC and that they wouldn't have approved it?  They do what the mayor wants.
Posted by Queens Crapper at 10:13 AM

The plan was approved by LPC and residents were consulted.

Exactly. They did what they were told. And think big Citibank logos in front of homes is fine. Sad.

Here's an interesting question. Why do they put these things in areas with excellent mass transit? You don't see them out in Rockaway, or Springfield Gardens, or Flatlands where a bike might be an alternative to a 2-hour commute. You see them in lily white nabes along subway lines. Are we trying to make NYers healthier or tourists? Why are we urging people to not take the train or a bus, which needs funding?

Crapper, what is your problem with this program? Is it the advertising on the station? Is it bikes, per se? Some unsubstantiated view that this was jammed down peoples' throats? This program won't cost the city a dime (we may make money) and a year membership costs less than a monthly metrocard.

So because someone says they'll pay for it, we should cede city property over to them? I suppose you like alienation of parkland as well.

"a year membership costs less than a monthly metrocard."

BINGO! Big problem when a growing city is encouraging a small minority of people to ride bikes instead of investing in better mass transit for the majority. It takes an hour for some buses to arrive in Queens, if the line hasn't already been shut down by the city. So let's take people who pay into the system off of it because that makes so much sense.

About ceding property, in the space for one or two cars, the city can give space to many more bikes, which will make it easier for people to get around the city. That seems like a good trade to me and if it doesn't cost taxpayers a dime, I'm all for it.

The MTA's budget and the cost of bike share memberships clearly are not related. I will give you the benefit of the doubt and assume that you understand that distinction and move onto a more substantive argument-- we need to expand transportation choices for people of all income brackets throughout the city. Bike share is one part of that equation and not something distinct.

City officials brag about how much $$$ projects like this generate. However, the taxpayers don't receive benefit. The people in this city get duped all the time while thinking how wonderful Mayor Bloomturd and his accomplices (developers and corporations) are!

"The MTA's budget and the cost of bike share memberships clearly are not related."

"a year membership costs less than a monthly metrocard"

Ok, so humor me, please. If a year membership costs less than a monthly Metrocard, are you saying that WON'T encourage people who currently take mass transit to bike instead? If no, then it seems that the revenue collected by the MTA will take a direct hit from this bikeshare program. I think that is the most substantive argument against the program, frankly. The other is the fact that the city is not set up for bikes, and encouraging newbies to go that route when many seasoned bicyclists are hanging it up because of the dangers is quite foolhardy.

Why did they price it cheaper than a Metrocard if the goal wasn't to take people from mass transit?

Okay, humor me now, Crapper, as I take a little look at the numbers to round out your thought experiment. Fares pay for less than half of MTA’s budget (Overall, MTA gets approximately $5.5 billion at the farebox, which is about 40% of its revenue). The rest comes from other sources.

If $9 million in revenue magically disappears from MTA's budget, they’ll lose about 0.17% of the money they get at the farebox, which again isn’t the predominant way that they fund either their operational or capital budgets. I think that the MTA can weather a 0.17% drop in their budget without closing up shop. Call me crazy, but I think that they’ll be alright.

If you are looking for a culprit to explain the fare increases or service cuts, look at the state’s role and underfunding the MTA or look at the other revenue sources that the MTA can use to fund its operations, and not at a program that will help NY.

Why did they price it cheaper than a monthly metrocard? Who knows? I’ll answer your question with another one—do you think that it was an evil plot by the city to undermine the MTA or a way to create another affordable transportation option for New Yorkers? Don't rush. Give yourself a second to think it over.

Do you see where I am going with this? I just don’t understand the rampant skepticism about an affordable transportation option that will not cost the city a dime.

No, it wasn't an evil plot to undermine the MTA. It was a way to make it look like they are expanding transportation options without investing in the infrastructure necessary for real people movement. Queens and other boroughs need expanded bus and subway service, and have for decades. But that's a big investment and a big headache, so lets throw up some bike racks instead and make a big to do about it so it looks like we came up with a solution. This has nothing to do with keeping people healthy or going green. If the city wants to make a big dent in pollution levels and improve the health of the population, they would expand and improve mass transit so that more people will ditch their cars. Take the money that the city throws at developers and give it to mass transit instead.

Why are there no bike share stations at the ends of the lines in Queens if this is meant to "supplement" train service? Wouldn't it make the most sense in Flushing and Jamaica? And how do you return the bike once you get home if it's only supposed to be for a 45 minute ride? Why are these racks primarily in Manhattan and Western Brooklyn which already have subway service up the yin yang? Very bizarre program that in reality won't help too many people. And those racks are prime vandalism targets. More street furniture to become eyesores.

So basically, this is targeted to people who live in an area that has access to subways already. Not the poor slobs who wait 45 minutes for a Q47.

Here's what it says on the citibike page: " If you would like to use a bike for an extended period of time, we encourage you to rent a bike at a local bike shop or rental business. Please visit our list of local bike shops and rental businesses on our Resources page. " Now a long term bike rental program would have made more sense...

As far as advertising on the street in historic districts, no one seems to be complaining about the numerous car company logos prominently displayed up and down the sides of the street. Bright yellow Beamer? Big red Hummer? fits right into to that historic district.

I forgot, we can't initiate other options or alternatives unless we improve mass transit first.

This program is not designed to replace owning a bicycle, which is what someone would do if they want to use a bicycle to replace using mass transit. The bikes themselves are not designed for long or speedy trips.

No, you seem to not grasp what the commenters are saying. I'll give you an example.

If you live in let's say Springfield Gardens, you take a car to get anywhere, because the bus takes forever to get there and they are slow and crowded. If there were bike stations in the area, some able bodied folks could skip the driving completely. Short trips, less reliance on cars. A long term city bike rental outside Jamaica stations would also be used a lot without hurting revenue because the rider would have paid for the train already. This program doesn't benefit anyone outside of central business areas, and most of the city doesn't live in central business areas.

It is a stupid idea because its not located anywhere that would take people out of cars. That's what I thought the goal of the mayor and commissioner was. Queens has lots of car dependent areas.

The reality is that if you live out in Queens you need a car to get anywhere of significant distance. While people could use a bicycle to replace short trips, they still need a car for longer trips, shopping trips, winter travel, family travel, etc. The investment in a car (ownership, insurance, maintenance) is much greater than the cost of driving the vehicle short distances (gas). The reality is people are not going to spend thousands annually on a vehicle so they can leave it home and take a bicycle to save $2 on gas for a local trip.

The program was implemented where it is because that is where it is likely to succeed, especially during its launch.

You know people still have the option of owning a bicycle and using it for their short trips.

More like aggressive and reckless drivers and bikes are a dangerous mix on busy congested urban streets. Motor vehicles are not the danger, it's the careless operators. Perhaps we should address that serious problem rather than try to use it as an excuse to discourage other road users.