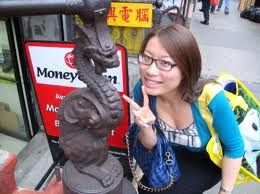 Thomas Wang, 26, testified yesterday in Manhattan federal court that he agreed to donate $500 to the Democratic city comptroller at the request of Liu’s then-campaign manager, Jia “Jenny” Hou, whom Wang had dated at the Bronx HS of Science.

Wang said he was hoping to get back together with Hou when she asked him to help meet a $1 million fund-raising goal for Liu’s nascent mayoral campaign in July 2011, and promised to personally reimburse Wang for his contribution.

Wang e-mailed Hou his credit card info, although online-chat records introduced into evidence in Manhattan federal court showed that Hou never used the card because the campaign had met its mark.

Also testifying yesterday was construction-company owner Jian Kang Chen, who posed next to Liu for a group photo at May 2011 fund-raising event where Liu was allegedly showered with illegal contributions.Chen, who also testified under a non-prosecution agreement, said he arranged for six of his employees to donate $800 each and later get reimbursed with his money.

Chen, who said he didn’t make a donation himself because he doesn’t have a green card, said he engaged in the scam to curry favor with Liu supporter and Chinese-grocery magnate Jeffrey Wu, who hosted the event and hired Chen to renovate apartments in a Flushing, Queens, high-rise he owns.

Mr. Liu has not been charged, but his name has been invoked frequently in court. On Thursday, Samantha Bell, an agent with the Federal Bureau of Investigation, was testifying about an interview with Ms. Hou that was conducted before her arrest.

Ms. Hou’s lawyer, Gerald B. Lefcourt, asked whether Agent Bell had asked Ms. Hou if there was a “personal relationship” between Mr. Liu and a longtime aide, Crystal Feng.

Mr. Lefcourt also asked whether the agent suggested to Ms. Hou that because Mr. Liu had long-term relationships with Ms. Feng and another aide, Mei-Hua Ru, “that he would be close to them and they would throw her under the bus, or words to that effect.” Agent Bell denied that.

Is this saying what I think it's saying?
Posted by Queens Crapper at 12:10 AM

Anybody that would consdier voting for John Liu is either a traitor, a crook or a fool, in my opinion.

Clearly John Liu, the son of a convicted Bank thief has been raised with no sense of morals as I see it.

Yes, that's illegal, but that never stopped this shady cousin of Tommy Huang from breaking the law and getting away with it.

Look at daddy Liu. Joe got off the hook with bank robbery (Great Eastern Bank) with just a slap on the wrist.

The federal charges that convicted Joseph Liu were
for bank fraud. That's robbery.

At least Jesse James had the guts to do it the old fashioned way...up front and personal, with a gun.

Yet the cover of the NYP is about separated Halloran dating an adult?! WTH!

The cover of the NY Post is about Halloran banging his intern, which is very much a no no.