Some street vendors say the city’s new bike sharing program has given their livelihoods the boot.

Nearly a dozen lower Broadway street vendors say they showed up to work on Monday only to find their corner at Liberty Street taken up by dozens of bike share racks.

They showed up to protest on Thursday.

From the West Village to Battery Park City to Fort Greene, Brooklyn, Bike share stations are appearing, and some find them appalling.

“This was just a really anxiety-producing moment, to realize you won’t have your space to vend that you’ve been working in for many years,” Stephanie Barretta of the Street Vendor Project told WCBS 880 reporter Marla Diamond.

They said they don’t mind the Citi Bike program. They just don’t want it on the busy street corner where they make a living. 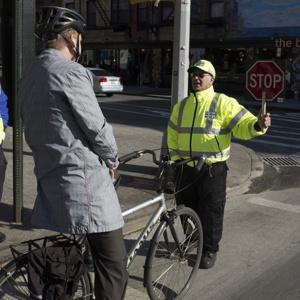 Taxpayers are forking over cash so a small army of city DOT employees can baby-sit rogue cyclists, reminding them of the basic rules of the road so they don’t pedal into pedestrians.

Nearly a dozen Department of Transportation workers — some who usually maintain traffic signs — were deployed to sparsely occupied bike lanes on First and Second avenues in the East Village yesterday to hold up red stop signs to control speeding cyclists.

The other side of the signs display the warning “wrong way.”

The sign holders said they loved their new, easy gig.

“This is great! Usually, I’m changing signs,” said DOT worker Danny Gonzalez, 40, of Bayside, Queens, a traffic-device maintainer who earns more than $50,000 a year. “This is so much less stress on my body. I don’t have to lug around a ladder to do this!”

They were specially trained by contractor Sam Schwartz Engineering.

The team will rotate to different bike-lane areas each day, and they’ll be out until October.

They’ll also hit the bridges and ask cyclists and pedestrians to not veer into each other’s lanes, the DOT said in a statement yesterday.

“It’s a waste of money, and it’s a waste of peoples’ rights. People know safety better than the government,” said Eric Alberti, 39, an East Village resident.

The DOT explained the workers are needed in advance of next month’s rollout of the city bike-sharing program, which is under fire from residents who say the racks block precious sidewalk and parking space.

The DOT won’t say how much all the new sign holders cost, but officials insisted that using city workers saves “costs associated with contracting out similar services from a private vendor.”

Residents argue the program isn’t necessary at all.

City Council Thursday cracked down on one of New York’s newest menaces — motorized bicycles that zoom down sidewalks or speed the wrong way in traffic to deliver food at breakneck speeds.

The so-called “e-bikes” have long been outlawed on city streets but cops couldn’t issue a citation unless they could prove the rider was exceeding 15 mph.

A bill the Council passed Thursday will prohibit the bikes regardless of their speed. If signed by Mayor Bloomberg as expected, the bill would slap business owners with $100-$250 fines for having an e-bike on their premises or if their employees are caught riding them on the street.

You know things are bad when the City Council looks like the voice of reason.
Posted by Queens Crapper at 12:30 AM

These losers need babysitters? God help us. At least the city is admitting that it is anticipating big problems with this program.

Anyone know if the racks are also taking up parking spaces ?

yes the racks are taking up parking spaces. why are parking spaces privately owned? sure seems that way - free real estate to all drivers!!!!

When the current crop of hispters from Davenport grow up and get married they sure the hell are not going to strap the tyke and missus on the back and go out in traffic.

This is not Manila.

Completely ignoring the fact that there is an army of NYPD traffic agents to wave traffic through intersections.

Actually, NYPD traffic agents write tickets to drivers. Never saw one write a ticket for a bicyclist, and these DOT employees are not authorized to do that. Just to "remind" bicyclists how to ride. When will drivers get warnings instead of tickets?

They have to teach grown men and women how to ride bicycles!

I thought bike lanes and bike share wasn't supposed to cost taxpayers anything. What a crock of shit.

They don't write moving violations. Only parking tickets. You can blow a red light right in front of them and they cant do shit except maybe rat you out to a real cop if one is visible.

Nice try. Drivers are the owners of cars. A car doesn't pay a ticket, a driver does. Furthermore, they direct traffic to clear congestion. They can tell drivers to proceed through the intersection when the light is red and to stop when the light is green. WTH does this have to do with DOT agents being paid to tell bicyclists to slow down and to prevent fights at the bikeshare stations? Can you say waste of money?

Another genius idea from Jeanette Sadik-Khan. She came up with this one while she was ignoring FOIL requests from elected officials about bridge repairs.

That's funny. Aren't bicyclists supposed to also heed NYPD traffic agents? I wonder why Mr. Bike Troll singled out drivers in his comment? He tries SO hard to villify car owners. You'd think all he'd exercise all that anger out of his system.

"...and to prevent fights at the bikeshare stations?"

You are just making it up as you go along.

I AM a car owner, but one that realizes the whole city doesn't revolve around me. I am just pointing out the hypocrisy and double standards.

Actually, the Daily News said, "The potential for conflicts could grow with next month’s launch of the city’s bike-rental program." And if there weren't expected to be conflicts at the bikeshare stations, these DOT people wouldn't be deployed there.

You are inferring from a poorly written (unspecific) statement. There's no reason to think there will be any conflict at all between users at the bikeshare stations. Why would there be?

From you Daily News article...
"The street managers won’t have enforcement powers, but will simply advise cyclists to ride in the direction of traffic, yield to pedestrians and halt at traffic signals; urge pedestrians to wait on the curb for the traffic signal and not stand in bike paths; and discourage drivers from parking illegally in bike lanes."

Who said the conflict would be between users at the bike stations? The conflicts will be between the users of the bikeshare stations and pedestrians or motorists.

If the program is as popular as anticipated, I can see there being fights over the last bike at a docking station. It's NY, after all.

This person did
"WTH does this have to do with DOT agents being paid to tell bicyclists to slow down and to prevent fights at the bikeshare stations?"

Unless this person was implying that pedestrians and motorists are going to approach the stations to start fights with the bikeshare users.

The whole statement is ridiculous anyway. No one mentioned anything about telling cyclists to slow down. It is the rare cyclists that breaks the 30 mph speed limit, and even the best cyclist couldn't come close to that on a citibike.

You're right, I see people fighting over taxis all the time.
Signed, obvious sarcasm guy.

That might have worked as sarcasm if people didn't in fact have arguments over taxis all the time. They also fight over seats on the subway and parking spaces. Did you just arrive?

Out of those three, the only one I have seen is people arguing over a parking space. I've seen lots of crazy shit in the subway, but never a fight over a seat, and I don't see people fighting over taxi's, and I have driven in Manhattan for many years.

OK, I found one
http://www.youtube.com/watch?v=NmCmmHzf9q4

So is the point that we shouldn't have anything that could cause conflict?

Maybe NYC would have better luck with a wife share swap program instead.

No, the point is we don't need hall monitors to protect cyclists.

Like BikeShare or hate it, I think the point here is that the city has gone way overboard with these babysitters. When you hop on a bike, in a car or walk the streets, you know what the rules are, and someone nagging you isn't going to change your behavior. This is a waste of money. And not telling the vendors that you are taking over their spots for bike racks is the epitome of government stupidity and heartlessness.

Like BikeShare or hate it, I think the point here is that the city has gone way overboard with these babysitters.

I think the cyclist would be the first ones to agree.

Great! We agree on something :)

Scrap this program! Another Bloomberg Blunder!

I just think it is alot of fun to watch this utter fiasco collapse from the sidelines.

It'll all be over when Bloomberg removes his skinny ass from city hall....UNLESS...he usurps himself a 4th term, with the blessings of you dumb ass voters!

33 comments?
Those bike brained trolls are out in force!