New rules of the road for delivery bikes in effect 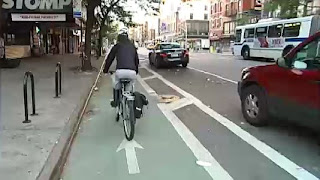 Delivery cyclists are facing new rules of the road today.

The City Council has updated the laws for commercial bicyclists in an effort to make the streets safer.

They must also carry a business ID card at all times.

Business owners must supply all of these items.

They must also make sure bikes are equipped with a bell, lights, brakes, reflectors and a sign showing the business name and bike ID number.

For more on the city's bicycle laws, visit nyc.gov/bikes.
Posted by Queens Crapper at 12:03 AM

The worst bikers in the city- a true menace to cyclists and pedestrians alike. Easier solution: deport them.

And these glorious new laws will be enforced by......????? Maybe the two or three police units that each precinct seems to turn out each tour will find some time to write a few of these. Of course, after they are sued a few times by the ACLU for violating the civil rights of a protected undocumented darling, enforcement will dwindle to nill, just like Stop and Frisk's (UF 250's) and moving violation summonses.

Good luck with that - esp. in Forest Hills!

And electric bikes are banned.
Call 311 if your local delivery service is not being compliant.

Do you think they give a crap about fines?
Most are illegals hiding beneath the radar.

Then you know where to find an offender.

Does this mean they can't mow people down on the sidewalks anymore?

How about enforcing NYS laws that an electric engine on a bike without a NYS license plate which is insured is illegal. How about following the rules of the road just like motorists?

Yesterday I was almost struck down by a young hipster biker, in the middle of a crosswalk, while I had the green light to cross.

It's NOT JUST delivery bikes that are dangerous.

Nobody on bikes seem to obey NYC traffic laws.

At least before these idiotic bike lanes where put in...bikers who competed with motor vehicle traffic (more or less)...followed the stop on a red light rule, or risk getting mowed down by cross traffic.

Now that they have their own exclusive lanes...it's a free for all against pedestrians.

These people dont have proper paperwork for themselves, what makes you think they will get it for their bikes???

And will they enforce this in Flushing, Jamaica, and Astoria, or is this a "manhattan rule" again?

And are they going to impound electric bikes?

"Yesterday I was almost struck down by a young hipster biker"

Yesterday two workers at Willets Point WERE struck, one killed, and one lost his legs, when a licensed driver ran into their storefront. If only we had some sort of system or licensing and rules in place for drivers to prevent this kind of situation. Oh wait....

And once again, the topic is bikes, and you have to bring up cars. Cars generally don't drive down the street in the wrong direction, drive through solid red lights or drive down sidewalks. Bikes do. And I've never been hit by a car, but I was slammed into by a bike on Grand Avenue while walking on the sidewalk and I can tell you it hurt like hell. So no, it's not "always almost."

Yes, I bring up cars, because you ignore the shark to go after the little fish. Hurt like hell is nothing nowhere close to serious injury or dead. And the numbers are not comparable. And the recurring argument from commenters is essentially license them like cars, as if that is some sort of magic fix to bad behavior. I don't know about you, but I see plenty of flagrant recklessness, traffic violations, disrespect for pedestrians, and it seems like at least one accident, every day. The stats show thousands of injuries and several deaths every month in NYC alone from vehicles, most of which can be attributed to carelessness or recklessness. Why is that somehow not an issue for you but the bicycle that hurt like hell is?

Actually, I have posted many car stories, you just apparently choose to read what you want to read. The reason people want bicyclists licensed and insured is so there is accountability as there is with cars, not because they think it will all of a sudden make the operators safer riders.

The topic here is that the City Council passed a law about bicycling. When they pass a law about cars I'll post that, too. Try to stay on topic. Just because drivers are careless doesn't make it ok that cyclists are and vice versa.

Bicycles are already treated like cars by traffic law. The major difference between bikes and cars is the damage that can be (and is) caused by cars is significantly greater.

If the main argument is to license them and insure them like cars, why shouldn't cars be compared to bicycles when it comes to the ability to cause property damage, injury, and death?

Once again, the discussion here is about a law that was passed ABOUT COMMERCIAL DELIVERY BICYCLES. The law is not about cars, so there is no comparison to make that would be relevant to the topic.

Why doesn't this troll stick to Streetsblog and Transportation Alternatives if he wants to read about car accidents? Or just watch the 6 o'clock news? Who wants to wake up every morning and pour over the details of collisions? I don't. I come here because the variety of topics is interesting and told from the type of perspective that the news can't or won't report them. Maybe he/she should write his own blog about traffic accidents if they are so hyped up about them. To each his own, but please take it elsewhere. (And I ride a bike!)

Thanks. It's not like I get paid to do this. If you don't like what I write, don't read it.

"The City Council has updated the laws for commercial bicyclists in an effort to make the streets safer.

They must also carry a business ID card at all times."

How does any of that make the streets safer in any way?

Reflective vests increase visibility. Bicycle helmets protect safety of the rider. Business ID cards are for accountability. I could swear a previous version of the bill said the bike had to have a sign on it with the name of the business.

Have to wonder who doesn't think this law is anything but a good thing.

The person who has to wear a reflective vest over their clothing while biking in the summer sun probably doesn't see the benefit. Do we really need reflective vests to see people in broad daylight? Is a man on moving on a bicycle not noticeable enough? Is there some epidemic of delivery cyclists receiving head injuries that I am not aware of that will somehow be improved by this law?
If the problem is cyclists on the sidewalk, you should want them to be as vulnerable to injury as the pedestrians. Requiring helmets has the opposite effect.

It doesn't have to be a vest. It just has to be a reflective article of clothing that contains the business name and ID number. So when they are running people over at night, they can still be identified. The helmets are for the majority of cyclists for their own safety.

"A" hole...
"I said that I was "almost hit" because I deftly side stepped in time.

Other wise I WOULD HAVE BEEN HIT!

I guess that in your ignorant estimation, "almost hit" doesn't count for much.

FU! Let the bikers roll, or almost roll, over your legs.

Or take ballet lessons
so you'll still be nimble at age 68.

I am a career bike messenger so I have enough cred than most to call this "law" and the "concern" of the people who wrote this a pile of bullshit.

In Bloomberger's NY,money,cruelty and spite trumps reason.This law also says you have to wear one headphone when riding.Very easy for the corrupt quota happy cop to stop you and write you a $100 ticket.

And in the last few days since this was implemented,the lawbreaking has not stopped.The food delivery riders and my fellow messengers are still running the red and riding up the wrong way.Even messengers from the company I work do not wear the vests or helmets that were issued them,and my boss gave us vests last year before the law was enacted.

this law is designed for quotas,it's that simple.Bikers are easier to catch than drivers.

this law,like other attempts by our obscenely wealthy morally bankrupt mayor are designed to annoy and do nothing to improve the so-called quality of life for the people and environment of NYC.

We should impose fines for chaining their delivery bikes to street trees also.

there is a tree on 52nd and madison I used to lock up to in 90s and now its too wide to for a 2 ft. chain to go around