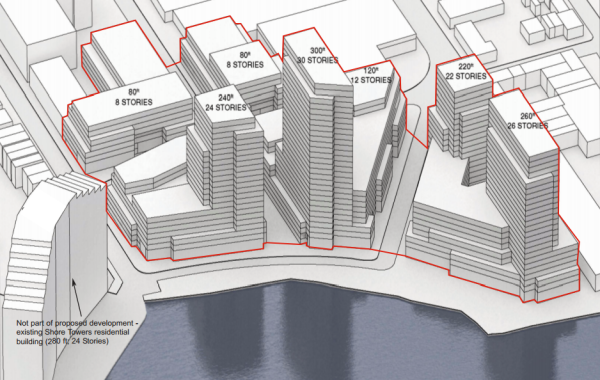 The Halletts Point redevelopment proposal to bring 2,644 apartments to a forlorn peninsula of the Queens waterfront has been in the works for three years, but now a different developer is throwing its hat into the ring.

The vaguely-named 2030 Astoria Developers LLC submitted an early application to the Department of City Planning today to rezone another smaller chunk of Halletts Point. They’re calling the project Astoria Cove and they want to build another 1,535 housing units—a combination of townhouses and apartments—on a site overlooking Pot Cove in Astoria, with a pristine view of the Queens leg of the Triborough (RFK) Bridge. Twenty percent of the project, or about 340 units, would be set aside for affordable housing.

When asked about the identify of those behind the LLC, Sean Crowley, the lobbyist who’s representing the developers and is the brother of Congressman Joe Crowley, told The Observer, “I’d rather not speak for them at the moment.”

“The buildings located along the waterfront,” reads the environmental assessment statement, “would have base heights between 80 to 100 feet that would be topped with towers ranging in height from 120 to 300 feet,” with the buildings further inland topping out at around 80 feet.

In addition to opening up the waterfront—with about twice the 20 feet of space required by the Department of City Planning, according the developer’s lobbyist—the builder is also planning to leave room for a 456-seat public elementary school, and “is exploring providing shuttle service for residents during the weekday a.m. and p.m. peak hours to and from the 30th Avenue station serving the N and Q lines.” (The proposed development is about three-quarters of a mile from the nearest train station.)

Contacted by The Observer this afternoon, Councilman Peter Vallone, who represents Astoria, said that he hasn’t yet thrown his support behind even the first project. The project, he said, “came in at almost twice the size they are now, so for years we’ve been working to whittle it down to something that’s economically feasible for them.”

Is it your job to ensure developer profits? Or are you supposed to be protecting your community from overdevelopment? Remember the blackout, Pete?

And what's the deal with Crowley hiding the identities of the developers?

Why the hell is every development project in Queens connected to multiple politicians and so damn shady?
Posted by Queens Crapper at 12:20 AM

Just what overdeveloped Western Queens needs; at least 2,644 more people flushing the toilets, putting on air conditioners in the summer and looking for parking spots. And right next to the Astoria Houses no less. This new development better come with its own police precinct, because they are screwed if they expect the 114 to respond to their rapes and robberies in a timely manner.

your all living like trapped rats stacked on top of one another. new York and queens WAS a great place to grow up 30 years ago. it's over Johnny. glad I left.

And should Peter Vallone Jr. get to be borough president, this will be greased through at lightning speed.

Maybe it's time to move to northeast Queens,
where the good life still exists.
Its R1-2A zoning (equal to Riverdale) makes it so.

As far as Queens western shore goes...the tsunami of over development will reach new highs, and wash away what little peace and quiet still remains.

Simply put, Astoria-LIC is becoming Mahattan East!
There's no turning back the clock on that.

That's kismet. It's written in the stars!

"Progress" rolls over all obstacles that are in its way.
Resistance is futile.

Underwater full of sewage and toxic chemicals twice in the past year.

This is the worse nightmare possible.

A Crowley deal in exchange for supporting Vallone as beep.

your all living like trapped rats stacked on top of one another. new York and queens WAS a great place to grow up 30 years ago. it's over Johnny. glad I left.
----------------------------------
I'm right behind ya pal. I have lived here for 45 years, born and raised. Queens today is not just no longer recognizable of the Queens I grew up in, it is outright hostile to the middle class residents who lived here for generations, and made it the wonderful place it once was.

Anonymous The Astoria Avenger said...
And should Peter Vallone Jr. get to be borough president, this will be greased through at lightning speed.

Not only that: make sure you don't vote for Paul Vallone in District 19...we don't want another "Vallonia" in our neighborhoods!

Vote for the other Paul - Graziano - who has worked with Tony Avella to stop the overdevelopment in our neighborhoods for the last decade!

An AVELLA-GRAZIANO ticket should give the Vallone brothers a serious case of indigestion.

You DO NOT want those goombah political thugs..
la famiglia di Vallone...having any say about your quality of life.

Don Paulo will slice and dice you and then move on!

Let me understand this.

A senator is lobbying to spend transportation money that is desperately needed elsewhere on something that no one needs to help a real estate project that benefits the brother of a congressman?

Underwater full of sewage and toxic chemicals twice in the past year.
---

Ok, so where is the preservation community in this city? This is everyone's transportation grid, schools, hospitals, city services, etc etc

No one says a peep - or is the attitude that this is Astoria and we all know what they are like and its not in my back yard so its their problem, and ...

which is of course nonsense.

Just because a community is too stupid to help itself does not mean that their stupidity will not blow back on everyone else....

Cramming 25,000 people on that peninsula will be a social disaster that will take most of this century to resolve.