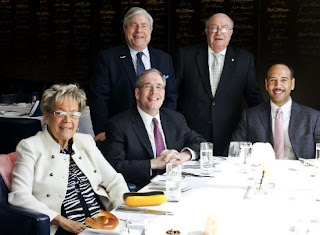 Letter to the editor (Times Ledger):

The old city Board of Estimate included the five borough presidents and, as a result, they possessed to some degree legislative power. The board was declared unconstitutional because the numerical populations in each borough were not the same.

A borough president in a borough with less population than another should not have the same legislative power. The Board of Estimate was disbanded and the legislative authority now rests with the City Council, where it belongs. The mayor, as chief executive, has some power, but the Council runs the show.

Since borough presidents no longer had any legislative authority, there was no basis to retain the office. Politics being what it is, the public foolishly retained the office, not realizing it had no such power. The office was given some limited land use authority subject to being overruled by the Council, which has the last say. The office was given some discretionary authority to disburse some funds in terms of the city’s budget.

The funds are disbursed by the borough president. In the final analysis, the office of borough president, which costs taxpayers tens of millions of dollars annually, has been nothing more than a useless patronage mill.

I take issue with former Borough President Claire Shulman’s claim that without the office, most of the important resources would go to Manhattan. Each borough has Council members who outnumber those in Manhattan, so there is no way they could be disenfranchised by Manhattan members. Shulman’s claim is political nonsense.

Equally nonsensical is the claim she made that the office is a powerful voice for the county. I doubt she can point out a dozen important changes she accomplished in all her years in office that significantly changed the lives of Queens residents for the better. Her reference to a sewer system in southeast Queens ignores the fact that she sat by and watched Willets Point property owners being charged sewer rent despite the fact that there were no sewers and she made no effort to have sewers installed and infrastructure repaired.

Her boasting about Flushing Meadows Corona Park, except for a possible playground, falls flat. She did not oppose a grand prix race track in the park or more than 40 acres of parkland given to the United States Tennis Association and its current application to expand. She never objected when her successor, Helen Marshall, urged the construction of a New York Jets football stadium in the park.

Her claim that she saw cultural institutions rise in the park demonstrates a lack of understanding about what urban parks are about. Parks are for passive use, not huge cement, brick and steel structures. In all the years from Donald Manes through Shulman and Marshall, except for structures that do not belong there to begin with, there has been no significant help for Flushing Meadows, and a walk around the park demonstrates its abysmal condition.

We have a Council. We do not need a borough president. Its budget could be spent more wisely.

Benjamin M. Haber
Flushing
Posted by Queens Crapper at 12:51 AM

Albany- Who needs it!

Why should New York City be ruled by a half-assed and poverty stricken Upstate region (who hate us) while bleeding us for our tax dollars.

Borough hall is more like a huge patronage factory.

There, all of the borough's incompetents secure lucrative employment for themselves, friends and family members.

DUMP THE OFFICE and SAVE MONEY!

You voters drank the Kool Aid poured by that deceptive cur, Claire Shulman.

She was Donald Manes' accomplice, and you chose to believe her because she looked like a kindly grandma.

Just like the wolf, masquerading as granny in the fairy tale, "Little Red Riding Hood":
"But grandma, what big teeth you have".

My vote is for Tony Avella, until the office can ultimately be abolished or radically changed for the betterment of us all. What better choice is there?

Well said, but if you really want a laugh check out the bozo we have here on Staten Island.

You're not the first person to think so.

Aw, c'mon: the Brits have the Queen, after all... Eggsactly: you mean Molinari, Malinaro, or Molinario?

"Why should New York City be ruled by a half-assed and poverty stricken Upstate region (who hate us) while bleeding us for our tax dollars."

Why should upstaters have to put up with crazy gun laws because of the city feral citizens.?

But the city folks need to remember where 90%+ of their water and electricity comes from.

Did you know that the city could save $24 million/year if the water wasn't poisoned by fluoride??!?!??

"Thanks for reminding us about how overpriced these essential services have become."

So how do you feel about the price of food, gasoline and medical care ? Once you are dependent on someone else for something you are open to their choice of price. Works just like the heroin market.

And the government running things does not change things - think MTA.

"So how do you feel about the price of food, gasoline and medical care ? Once you are dependent on someone else for something you are open to their choice of price. Works just like the heroin market."

Pretty soon I'll be charging you for the air that you breathe!!!

They should be called Borough Morons instead of presidents.

These five knuckleheads have the combined IQ of a house plant.

House plants are smarter.
Even dirt has a higher IQ.

Beeps should have gone as a result of the 1989 Supreme Court Board of Estimate ruling. Queens should be broken up back into three wards.

There were five wards in Queens. not three.

She's smiling.
She's giving us all the asshole wink!