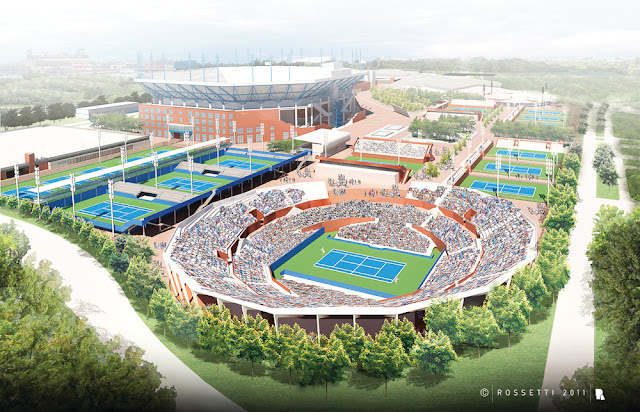 This Sunday, April 21 at 1:00 PM, Senator Tony Avella will be joined by NYC Park Advocates and the Queens Civic Congress at a rally to protest the proposed expansion of the USTA Tennis Center in Flushing Meadows-Corona Park. The New York City Planning Commission will hold a public hearing for this project this coming Wednesday, April 24th.

This proposed expansion would require 0.68 acres of parkland to be permanently turned over to USTA in addition to the 42 acres of parkland that they already possess. However, in reality, this project will alienate parkland without replacing it, robbing the community of public green space. In conjunction with the proposed construction of a Major League Soccer stadium and a large mall as part of the Willets Point development, these three projects constitute perhaps the biggest land grab for parkland not only in Queens but also in the entire City.

The three projects will result in elimination of crucial parkland from our borough's most prominent park, which provides open space and recreational benefits to thousands of borough residents, immigrant families and low and middle income families.

Avella will call on the City Planning Commission to reject this proposal and will continue to fight against all three projects and any further commercial development in Flushing Meadow Corona Park.

Is this open to anyone who would like to attend ~ ?

It's in a public park. No one can be prohibited from attending.

which provides open space and recreational benefits to thousands of borough residents, immigrant families and low and middle income families.

Why are immigrant families and low and middle income families somehow distinct from borough residents?

Ok, great. I will probably attend. Oh, and a friend invited me to Avella's April 28th Rally and Press Conference @1:00pm at Queens Boro Hall. I'm going to try attending that also. ~

Is crappy going too?...I'd love to meet crappy, would be interesting to find out who crappy really is.... ~

I'm sure that a lot of shady pols would like to know who "Crappie" is.