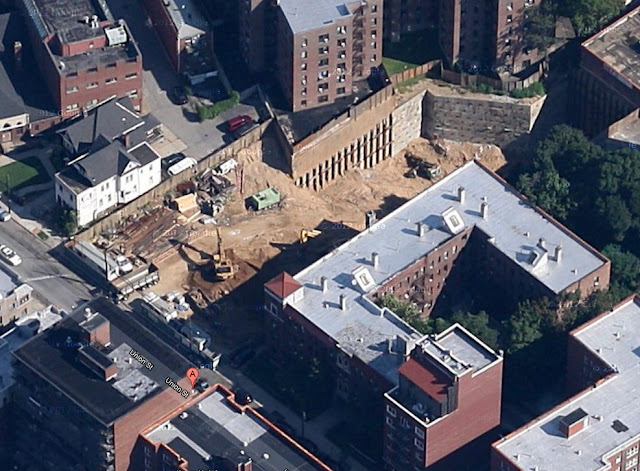 Community Board 7 held a raucous Monday night meeting where it approved an 18-story hotel in downtown Flushing that will be attached to a nine-story medical center.

The board voted 30-8 to give developer Richard Xia permission to circumvent zoning laws and use his $60 million gleaming glass building, already under construction at 42-31 Union St., as a 161-room hotel.

The existing zoning allows for residential use or long-term hotel uses, but the developer is arguing that he will not be able to get a reasonable return on his money and asked the board for what is known as a variance to house a short-term hotel instead. Technically, a patron of a long-term hotel has to stay for at least a month.

The board’s vote is advisory and the decision is ultimately up to the city Board of Standards and Appeals.

Mitchell Ross, the lawyer who wrote the variance application, outlined several reasons why the developer believes he deserves relief from the laws that regulate the use of the building.

First, the irregular shape of the lot and the subpar soil conditions increased construction costs, and income levels around the building are not high enough to make luxury apartments economically feasible, he said.

He also argues in his variance application that flight noise from LaGuardia Airport would deter long-term renters — an argument that could be applied to nearly every block in the downtown Flushing area.

“I resent the fact he is not the senator from the district,” Sweeney said.

Kelty and Avella’s aide, Dawa Jung, then had a back-and-forth argument about CB 7 protocol and a disagreement the two had years ago.

Urban planner Paul Graziano, who is also running for City Council, testified against granting the variance, saying the builders brought these conditions on themselves.

“I would just build a smaller building,” he said, arguing that would solve many of Xia’s financial hardships.

But according to Joe Sweeney, chairman of the CB 7 Land Use Subcommittee, the short-term hotel would be the least intrusive. The building’s shape will not change, but short-term guests might drive less and instead take hotel-provided shuttles to the airport and downtown Flushing.

Ok, so here we have community board members pissed at a State Senator from outside the district for getting involved in a project at the request of local residents instead of getting peeved about the State Senator for the district staying silent. Then we also have the same members pushing for the variance on behalf of the developer. Interestingly, Chuck Apelian did not show up for this meeting. Paul Vallone was one of the "yes" votes. The soil is subpar because there is a river flowing beneath the property, but no discussion of that by the board.
Posted by Queens Crapper at 12:02 AM

Really? Nothing hypocritical going on there, Right?
http://queenscrap.blogspot.com/2013/04/why-did-chuck-and-gene-show-up-at-cb4.html

Enough already with all of these flop house "hotels" being built in Queens. Queens does not need hotels . Other than our 2 airports, Queens is not a destination , let alone, Flushing! Build them by the airports.

There are so many Hotels in Flushing that are alwsys full, I don't understand what the attraction has been in recent years. Is there something going on there we the people who grew up with the Main St of years ago don't know about ? I steer clear away from there now. It's a dirty, stinky congested area

"Follow the buck" Chuck Apelian, is probably getting a piece from the developer!
Bounce that crooked rug head from CB#7.

Chuck has gleaned printing contracts from developers in the past.

His "Prestone" company has been enriched in this way before.

Why isn't Chuck under FBI investigation?

He needs to be.

What does Gene Kelty get for pocket change?

How come crooked Dan Halloran wasn't criticizedby the Kelty-Apelian heavies, for his approval of the Flushing Commons project, TWICE, when it was presented to CB#7?

It isn't in his district!

Obviously there are a pack of developers stooges on CB#7!

Then there's shady Paul Vallone , the developers' lobbyist and a sitting member of the board of CB#7.

Does anyone see a conflict of interest here?

Forget it Jake, it's Chinatown!

Yea Tony! Yea Paul! These guys are the best!

Just what downtown Flooshing needs - another Hooker Hotel! Why would anyone want to stay in Flooshing? It's a Third World shithole!

I'd like to know which CB7 members had the courage to stand up and vote "NO."

I wander how much they got paid.

If that greedy Chinese developer would have bothered to check the topographical maps, he (or his architect) would have soon discovered that a stream runs through the site he's developing.

That's why he's losing his shirt on an expensive excavation and foundation.

If he fucked up, why should he be rewarded with a variance to bail him out?

Let him take his losses on the chin instead of money from our pockets.

Asians always seem to think that America is here to lift them out of the boiling stew pot they've created for themselves.

That's mahjong! Sometimes ya win. Sometimes ya loses! Life is a fortune cookie without any guarantees of success!

I think that some big news is going to be breaking this week, regarding CB#7 and this project...heh, heh, heh.
Please stay tuned ladies and gentlemen!

Maybe Chuck Apelian was MIA from the Monday night CB7 hearing, because he was busy consulting with his attorney, about his culpability in this affair.

I hope the feds slam the door on that arrogant bastard.

Maybe CB 7 will topple like a house of cards.
It needs to!
This is one of the shadiest boards i the city.