Situation not normal on Normal Road 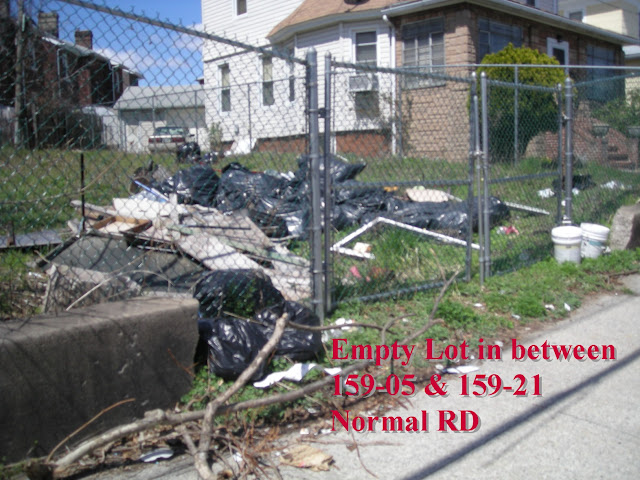 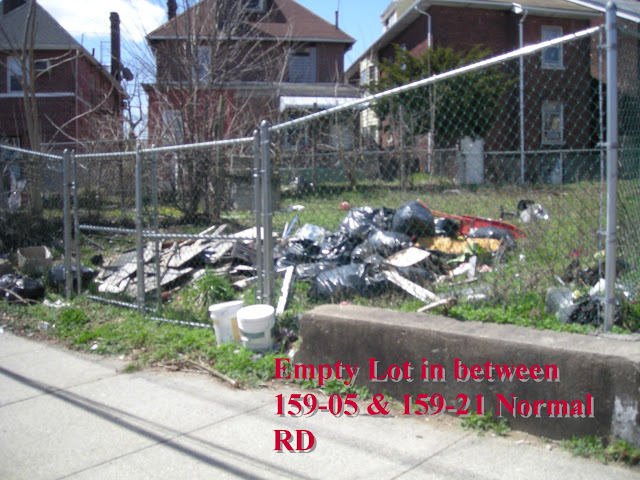 Walking North of Hillside Avenue into the beginnings of Jamaica Estates on a road called Normal Rd, is anything but normal. Although at first glance I thought I was in a somewhat nice neighborhood, the homes did not look too bad, but then I started to notice homes that were torn down and replaced by those familiar 3 story shit apartments that you see around Jamaica. As I continued to walk, there was a fenced in empty lot (although the gate is not locked and opens up) and as the first two photos attest to, a dumping ground for mounds of garbage, some looking like construction crap. This lot is in between 2 homes, 159-05 & 159-21 Normal Rd between Parsons Blvd & 160th Street. 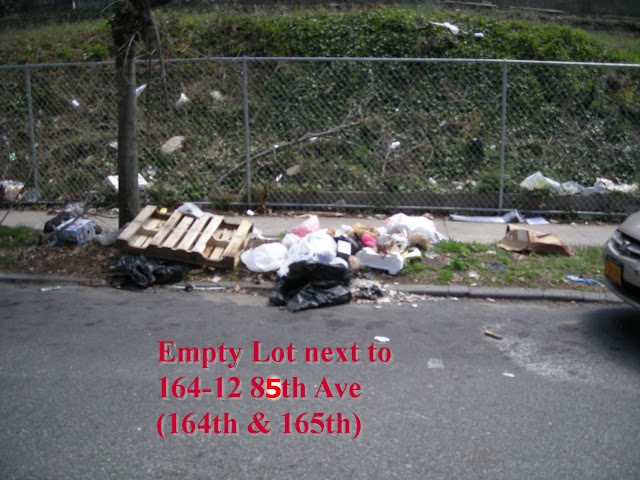 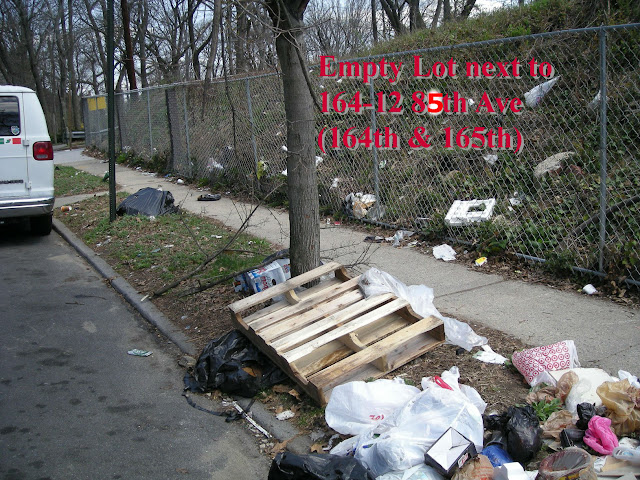 As I continued my walk on 85th Avenue between 164th and 165th, I saw another empty lot next to a house with the address of 164-12 85th Avenue. This time all of the dumping was actually on the sidewalk, spilling onto the street. All of this right next to the cute little Captain Tilley Park.

Now I wondered why what at first looked like a decent neighborhood with some nice homes (but probably looked much better 10-15 years ago), would just allow all this garbage to pile up, which looked like for a long time and not say anything or call DOS. Then I begin to look at the make-up of the neighborhood and the people who were coming out of the houses next to these empty lots and across the street from these empty lot and down the street, and you know where this is going and well the common denominator was Pakistani immigrants. Now I do not want to cast judgement on anyone or a group of people................oh what the f*ck.............of course I am. The same Pakistani immigrants who have pretty much turned my few blocks into garbage pits (and other parts of Jamaica), who own most of the empty problematic lots near me and who have pretty much turned many blocks of Hillside Avenue into what looks like one long stretch of dirty stores, signs all over the place that you cannot even tell what the business actually is and garbage all along Hillside have seemed to spread like a cancer over into the other side of Hillside Avenue into Jamaica Estates.

You know how some people have the Midas touch, well the Jamaica Pakistani immigrants seem to have the shit touch, everything they touch ends up looking like shit garbage. And why not, if you have ever been to Pakistan or seen the country on documentaries, you would know that it is one of the filthiest countries and has one of the dirties beaches, Clifton Beach in Karachi, so it is no surprise that they have helped to turn Jamaica into a even more dirtier place. Now I am sure some of you are saying, well it is a culture thing, it is what they do in their country, BUT, in some middle eastern countries women are stoned to death or beheaded for infidelity, BUT, that would not be tolerated in the USA. Some African places engage in female genitalia mutilation, BUT, that would not fly in this country, so why is this bullshit accepted? Ms. Yvonne Reddick said in the NY1 garbage series, that we have a large group of immigrants who need to be educated in the proper way of deposing of their garbage. BULLSHIT, it is just being a low class, I would say pig, but pigs are actually clean, so they are just low class third world immigrants who fit in with the rest of the low class people scattered all over Jamaica. 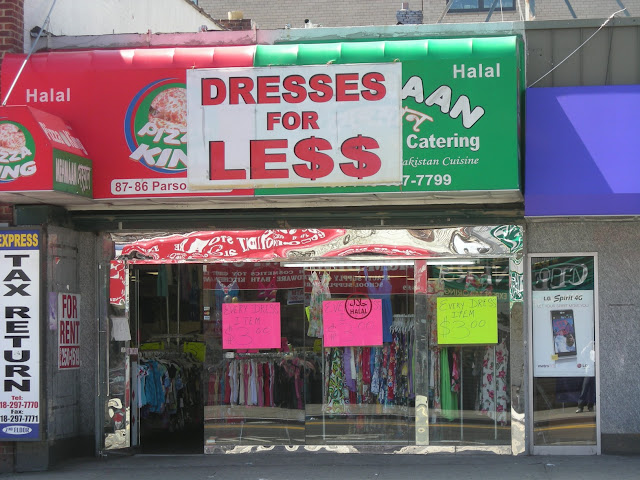 And just for laughs I have include a photo of what was a Halal Pizza Shop on Parsons Blvd, that is now a cheap ass clothing Store, but instead of just redoing the whole place, why bother, just stick all of the cheap shitty ass clothes all inside the pizza place and hang a small sign "Dresses for Less" that barely covers the Pizza sign. "Hey can I have a mushroom slice with that printed flower dress, oh and a large Pepsi too.......to go and throw in some garlic knots."

Jamaica, you gotta love it. It would be very painful if it were not so funny.

If this were happening in Prospect Heights or Chelsea, it'd be cleaned up before the residents even woke up for work.

Quinn spoke of rectifying "environmental racism" in defense of her support of the waste station on the upper east side. Joe, why don't you try adding Ms. Tyrannical Big-Mouth to your mailing list and add in a few choice words for her?

Remember it takes lots of money to put up those buildings and no tax revenue comes in until they are sold.

So guess who pays?

Joe, I love it: public shaming - not so much of the persp ( clearly they don't care, or don't recognize there's a problem) but of the sytem, which allows this crap to continue. Jon is right: this wouldn't last a moment in the Mayor's RECOGNIZED NYC.

Yeah, i'm sure the people on welfare, section 8, food stamps, discount bus fare, and unemployment are really adding to the tax roles.


And as for this happening in PH or Chelsea, if there were an issue like this, the local citizens would get together, organize a volunteer team, and clean it up themselves. Its called having initiative and community pride. Two things lacking in places like Jamaica.

You can thank Teddy Kennedy for all this.

Please keep up these terrific shaming posts. This is the best method to draw attention to these problems and hopefully encourage change.

FYI... I believe (educated guess, could be wrong) that "Normal Road" harks back to when there was a "normal school" on that street. A "normal school" was a forerunner of a post-secondary school specializing in training future teachers.

"And as for this happening in PH or Chelsea, if there were an issue like this, the local citizens would get together, organize a volunteer team, and clean it up themselves. Its called having initiative and community pride. Two things lacking in places like Jamaica. "

And how do you know that they are all Pakistanis, by the way? I agree it's a horrid situation, but don't blame any particular ethnic group. In some cultures, concern is only with cleanliness INSIDE the home, and they are meticulous, however impoverished they may be. Doesn't matter what's outside. This is true, I found, in my readings on Gypsies, who have in most if not all countries been forced to settle and not roam. Being that the gypsies originated in India, there may be a cultural connection to what you're seeing in Jamaica. Next door to me is a 2-family with renters, one family of which is from India, the other a couple of "native New Yorkers". The yard is a pig-sty. NO ONE picks up anything that flies out of the never-covered cans, and needless to say, much of it winds up in my yard and garden. My building is also comprised of renters, but we simply consider the yard and sidewalk an extension and reflection of US, and they don't.

To anonymous who asked how do I know they are Pakastani, well I don't fly blindly. The first two are the properties in question, the others are nearby.

They are Bangladeshi immigrants and not Pakistanis. I live near that area and I agree with what you're saying. The community is in deplorable condition. The dilapidated deli stores are predominantly owned by people from Yemen. It is indeed a very depressing neighborhood.