The pagan and the Meaghan 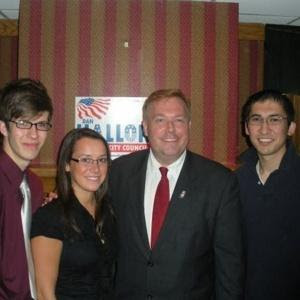 The Queens city councilman at the center of the Malcolm Smith corruption scandal was a lousy husband, too — throwing away his marriage for a co-ed staffer half his age, The Post has learned.

Dan Halloran, 41 — who is charged in a bribe scheme to get state state Sen. Smith into the mayoral race — repeatedly hooked up with Meaghan Mapes, then 21, in her Queens home between 2010 and 2011, sources said.

She served as his deputy chief of staff during that same period, earning $30,000.

The relationship was the final straw for Halloran’s wife, Cynthia, and the two were locked in divorce proceedings by early 2011.

Halloran slept over about twice a week in Mapes’ basement pad, according to a roommate. She was studying government and politics at St. John’s University.

Mapes, now a law student at the University of Virginia, did not return calls for comment about her relationship with Halloran.

She first worked for him in his 2009 City Council run, and was cut three $1,000 checks — which a source said “pissed everyone off.”

“What did she do?” the source asked. “What about the other campaign staff workers?”

Her former roommate said she started bringing him to the apartment around the summer of 2010.

Halloran would sneak in and out of the apartment using a side door, and the two were glued to the hip, the roommate said.

So the worst kept secret in Queens politics is finally out? I wonder if another City Council ethics investigation will be brought since putting your mistress on the city payroll is pretty damn shady.
Posted by Queens Crapper at 6:43 AM

Danny, you oughta know better - if she's not a virgin, we can't sacrifice her.

Thing is , this is not new. Everyone knew about it. He was as blatant about it as he was with everything else. He just doesn't give a shit.

Now was that a legal basement apartment? Did Dan help the landlord with violations?

Lets look into the monies from the whitehouse dealings and the lot across the street from his office. Lets look into the monies from the welcome to Whitestone sign and landscaping. Was money funneled there as well? Check it out, all ya need is a little digging. While ye be at it take a look at the piazza Italia sham and see how many other councilmembers come tumbling down.

Ah the Blarney Stone should have been kissed ye pagan beast.

wow. i didn't see this one coming. Breaking News. i think not. The only shocking part of this story is that that halloran was able to find a 21 year old girl to bang him.
BT - the quotes about halloran from megans roommate had me rolling on the floor. my whole body hurts from laughing so hard.

can't wait till the post covers the truly scandalous story of the love affair between halloran and that adorable little man child lombardi.

If it walks like a duck, swims like a duck... must be a duck. How could so many people have stood by this creep for so many years? Shame on all you Halloran supporters. Corruption and scandal of this size doesn't pop-up overnight.
ps. the room mate quotes we so funny!!

Always wondered why when i drove through Whitestone and especially down Francis Lewis Blvd near his office it always stunk of crap! All his buddies and political pals/croonies are all filthy dirty. Now I'm starting to wonder about that office hes in on Francis Lewis and what they're involvement is in this scandal? How far does this debacle go? Everything this guy seems to touch becomes dirty or was already.... all very interesting and wonderful food for thought.

And poor poor Megan. Really? Did you think you were going to go far with this creep? You couldnt just have slept with a dean at the law school??

Coming for you said...

Who owns the orrifice? I mean office?

Rumor has it his former chief of staff an current attorney has a piece.

Easy to check just go on the dept of finance website and type in address.

Crappy do you know who owns it?

Lol at the roommates' comments.

His office is directly behind the building that houses the Queens Countty Republican organization. I would bet both buildings are owned by the same person and I wouldn't be surprised if that owner is high up within the organization.

the saga continues. what a f@#&ing joke.

If you know the address, go to www.oasisnyc.net, and type in the address. You'll find out.

I take back my comment after checking that and the city website. There is no listed property owner.

I'd like pipe in that, just sans the bribes and payoffs.

There is no listed owner? Impossible. Who pays the taxes ?

It has to be there. You're not looking or you saw something you didn't want to touch.

How strange. Ragusa's CPA firm is listed as occupying the same building as the Queens County Republican party. Or maybe it isn't that strange.

the owner/s seem to be very good at concealing their identity but according to my research the brother-in-law of halloran's former chief of staff is one of the owners the other owners are his family and business partner. i cant believe this crap. the more we dig the more we find. THE SAGA CONTINUES.....!

Anon no. 17: I'm not kidding. There is no listed owner. Take a look for yourself if you don't believe me. There is something going on here.


The owner of his building is Peter Zucherello, who also happens to be the brother-in-law of his attorney that's trying to keep him out of the pokey.

FYI:
"Queens Garden Center" is owned by the Zucherello family.

Many years ago...during a drought, when restrictions were imposed on the use of water in NYC...they were caught red handed violating that edict.

When a city inspector discovered this, he was beaten with a shovel by a Zucherello worker. It made the press! Google it.

Are the Zucherellos tied to the Gambino crime family? Good question.

There were some rumors floating around, back in the day...of strong arm tactics that were used by the Gambinos...that alowed Mr. "Z" to acquire an adjacent property to expand their business.

WHERE"S THE FBI? The Zuchs used to own an Italian super market not far from where Joey "d'or" Franco's White House restaurant is located.

Franco was noted to also be a friend of the Gambinos, in the press.

It looks like Whitestone, Beechurst, Malba is sprinkled with Gambino amigos.

It also appears that Halloran is bound by the hip to the Gambinos, and owes them some return favors.

EXPAND THE FEDERAL INVESTIGATION!
There's a lot of mafia "soldieri" hiding out on CB 7's board too. Maybe Don Paulo Vallone?

Apelian kisses Vallone's ring...
bu the Sicilian mob would never admit an Armenian into their brotherhood.
Man, it sure looks like Chuck plays the outfield for them.

A few of us knew about all this years ago.
It finally broke.

Maybe investigators are following some of the tips offered right here on Queens Crap.

Keep on looking. We know the nabe!

The thought of having sloppy sex with a Theod beer belly sickens me.

How many tricks did Meaghan have to perform for those two $1,000 checks she was cut?

This whole thing is too much for us constituents to have to swallow!

Gag! I hope that she didn't have to do the same.

You say that Meaghan is now a lawyer in Virginia?

Maybe she jumped political parties, and is now "working" for "Virginia" Joe Crowley.

Now we can all guess at what that "goo" was on Halloran's T-shirt...pictured (most graphically) in his arrest photo.

The FBI didn't have the common courtesy to hand Dan a Kleenex.

And they left Dan's current squeeze to fend for herself (or himself?).

Federal manners could use some improvement.

At least they gave Smith some time to dress.

"Crappy" maybe we should start up a Halloran photo gallery on Queens Crap.

He takes a great picture and we need comic relief from time to time.

Yeah....a "doofy" Dan electronic pin up wall!
Let's search out his baby pictures. There must be a good one around, that shoes Danny boy as a NYPD cadet.

Uh. why did he not finish his training?

Did he get caught in the locker room by police brass, doing nasty things?

Somebody might want to look further into the documents and matter. If so,

Deeds and other documents are located under 5768 09.

166-06 24th Road is listed on Palmieri & Costiglione's Website as being the location of their satellite office.

Is that building zoned for a law office?

Patrick Halloran - is familiar with the facts he states in Affidavit Under Section 255 of Tax Law ???????

I'd eat that ass in a heartbeat. Girl has to have some serious daddy issues.

i would really like an example of what they have done for the community on a totally selfless level. not examples of "do gooding" that has a back ended self promotion tied to it. then i would be the first to sing their praises.

Are you under the impression that the Zucherellos are just good neighborhood guys?

LOL!
You need stronger reading glasses to be able read between the lines better.

And Meaghan's daddy
didn't know what was up between his daughter
and her father figure Dan?

Tell me another fairy tale!
A dad gets wind of these kinds of things.

Meaghan obviously knew that the Councilman was married.

She probably knows a lot.

Meaghan came from a broken home

dan halloran ...schmuck...,committed a crime and did not even google MOSES STERN, the CW hasidic who was giving him checks from Monsey pals.

Moses was indicted and convicted of federal embezzlement of $26 Million from Citicorp ,in a shopping mall scam in NYS.