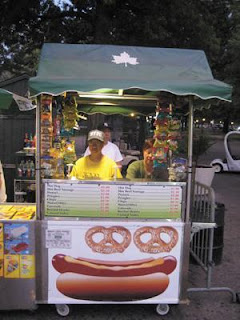 City Council Member Peter Koo told Zausner that business owners around the tennis center say they don’t get promotional support from the USTA or see much additional business during the U.S. Open, which the center hosts every year and which the USTA cites as a serious boon for the local economy.

Koo suggested the USTA offer promotional opportunities inside the stadium to local restaurants during high-profile events.

“They have so many hot dog stands. What about a Chinese food stand?” he said.

“I will tell you that we have not done a good enough job reaching out to all the businesses in downtown Flushing,” Zausner responded, adding the tennis center has garnered lauds from the Sheraton LaGuardia East Hotel and the Flushing Business Improvement District.

“There will not be outright ‘no’s,’” he said. “There will be a conversation, and we will figure out what we can do together.”

Koo stated he would support the expansion if he could be assured the USTA would reach out to area businesses.

Why does Peter Koo think that it's his job to tell the USTA what they need to do to gain his support? Why doesn't he just let them try figure it out on their own?

Now you know who the Council Members really represent.

Why isn't Koo concerned that the Parks Dept suddenly, and for no reason, pulled Tommy Chan's vending permit this year?

Tommy has sold hot dogs for years near the mosaics in the park. According to the Courier, he was the only vendor authorized to sell in the park during the U.S. Open.  (Figure that one out.  The USTA has a legal monopoly?) Now he's been removed, as per a story featured on WPIX, which unfortunately was not posted online.

So who pulled the plug and why?
Posted by Queens Crapper at 12:28 AM

Not a fan of the USTA crowd that invades the park for two weeks every summer, but why should they be guilt tripped into travelling to scummy downtown Flushing to eat food that they don't want? And since when did the Flushing restaurants start claiming be friendly to "round eye"?

Peter Koo lives out of district in Port Washington.
He dumps in Flushing where he doesn't have to smell it!

Maybe if Mr. Chan switched from selling the all American hot dog to egg rolls, his permit wouldn't have been pulled.

Chinese political war lords, like Peter Koo, are trying to call the shots in what's clearly none of their business

"What about a Chinese food stand"?

Chinese prejudice against "foreigners" runs rampant in Flushing. They dislike everyone but their own kind. They really dislike Latinos and Blacks.

For example, Where's that phony local Human Rights Commission representative when it comes to defending the rights of African-Americans?

I don't get it. The Open is held for just 15 measely days per year. What about the other 350 days? Why are we wasting time figuring out who gets a vendor permit for the Open? Leave the yearound vendors alone!

Chan is a year round vendor. But he makes most of his money during the Open, and that cuts into the USTAs bottom line.

Keep crowing over the demise of the Republicans.

One party states can pretty much do what they wish.

I should say "self-inflicted." There's a Freudian slip if there ever was one.