It's hard to be a neighbor of Sadik-Khan 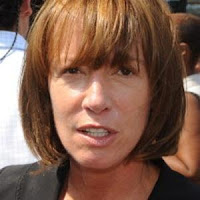 City Transportation Commissioner Janette Sadik-Khan was so convinced her neighbor was spying on her family with a video camera that she pulled strings at One Police Plaza to get cops to search the man’s apartment, law-enforcement sources told The Post.

Sadik-Khan called Police Headquarters to report that a man living in a high-rise building across the street from her West Village apartment was using a video camera to peep on her and her family, the sources said.

“It looked like a recording device and that’s what spooked her,” a law-enforcement source said.

An NYPD detective was dispatched to Sadik-Kahn’s home earlier this month and looked out the window to see what looked like a video camera in the man’s window.

The detective was satisfied that the device appeared to be a video camera and went to a Manhattan judge, who signed a search warrant allowing cops to search the man’s apartment for the device in his window, the sources said.

“It’s a total invasion of privacy. Are we living in a police state?” said a police source. “Sadik-Khan says, ‘I think he’s got a recording device.’ That’s pretty flimsy.”

When cops searched the man’s apartment, the “video camera” turned out to be a piece of equipment that can’t record anything.

“Why would the DA’s Office and the judge go along with that and sign off on a search warrant?” the police source fumed.

If you or I called the police and claimed something like this, would they even show up to investigate?
Posted by Queens Crapper at 12:10 AM

That neighbor has some $$$ coming,sue her and the city!

It's against the law to use a camera? This guy was trespassing on her property? Maybe he was just doing an artistic architectural photographic study.

In a similar vein, have any readers themselves been stopped for using a camera going travelling across the bridges or tunnels? What's the legality of those "No photos/video" signs posted on them?

She is expected to be on ABC Eyewitness News this Thursday, April 25, @ 5:00 News in an interview with Jim Hoffer, along with separate interviews with Senator Avella on the 149 Street Briudge situation in Flushing Queens. I'm curious to watch and see what she said/says. ~

Let's notify Homeland Security and get a federal warrant to search her crib....LOL!

If I were a peeping Tom ,
I wouldn't be interested in this skank anyway.

How much do you think that a "pin-up" photo of Jeanette would sell for, anyway...maybe 10 cents?

The guy across the street said...

I am a freelance security consultant. My camera was trained on her pad to see if Bloomberg was coming up a ladder leading to her bedroom window.

Sounds like someone with some serious psychological issues. Does she really think her life is that important for someone to point a camera at her residence?

And what a horrible looking hag!

George wrote: have any readers themselves been stopped for using a camera going travelling across the bridges or tunnels? What's the legality of those "No photos/video" signs posted on them?

I found this explanation.

Obviously, she is paranoid and scared. Paranoia usually stems from guilt.

Thanks for the "explanation" BUT the guy quoted in your link says right at the outset: "...I am not a lawyer and this should not be taken as legal advice..." Then he says in his summary "..you can photograph anything you see in public...people, buildings, BRIDGES [my emphasis], trains, police officers..."

Those "No photos/videos" signs are just waiting for a test case as to their legality. And BTW, if you're up to no good, you know how easy it is to take images clandestinely?

With regard to Sadik-Khan: There are plenty of video "artworks" where the artist just stuck the camera out the window. John Lennon did a time-lapse study of a construction site from the hole in the ground to the completed building. Wolfgang Staehle has time lapse video going on in Williamsburgh Brookyn when he caught the first plane approaching the WTC.

Maybe she's afraid that one of the bike gangs that use her bike lanes, might stop off at her pad to say "hello".

You can freely record anything you see in public, this means you can shoot video out of your own window 24/7 if you please.

Besides, how many city-owned "security cameras" out there can see into people windows????

The Bill of Rights said...

Who OK'd those tunnel and bridge "No photos allowed" signs? Who? Ray Kelly, Bloomberg, Giuliani & Partners? The Corporation Council?

Who? WHO is in charge here?

Yes, it needs a test case, but it will be expensive. Why hasn't the ACLU or NYCLU challenged it already?

Paranoia is a form of schizophrenia brought on by an adolescent HERV-W retrovirus and treated with clozapine. Typical schizoparanoid behavior includes racism, sleaze (based on the assumption that "they" do it), and corruption. Racism is the give away because it is the way they justify their sleaze.

Check out her father and his ... um ... relationships.

Ok here it is;

She was Obama's classmate at Occidental'82

Her grandfather was an Imam