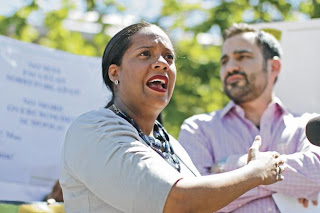 A Queens lawmaker is in talks with the city to create a public-private alliance to fund the upkeep of Flushing Meadows-Corona Park.

It could also eventually seek a cut of the rent paid to the city by Citi Field and the U.S. Tennis Association, which are located in the park, she said.

“Flushing Meadows-Corona Park has not received the attention and resources it deserves,” Ferreras told the Daily News on Wednesday. “We get such a small percentage of the dollars that are generated by our park reinvested into our park.”

Holly Leicht, executive director of New Yorkers for Parks, said she supports the idea of an alliance.

“It is the most heavily used park in Queens,” she said of Flushing Meadows, which is bordered by low-income, immigrant communities. “It really does need that public-private partnership to have that level of care it deserves.”

Well if it is bordered by low-income, immigrant communities, then where does this dingbat think private donations like the ones that fund the Central Park Conservancy and the Prospect Park Alliance will come from?  And if conservancies work so well, then why did the one for Flushing Meadows not raise any money?   Why do we need another one?  The Queens Chronicle asked the same question in an editorial this week.

Why aren't these people demanding adequate funding in the city budget, as the city is supposed to provide?

What kind of park advocates push for the privatization of public parkland?

Geoffrey Croft, president of New York City Park Advocates, said if an alliance profits from the stadiums located within its perimeters, this could create an incentive to rent out more parkland to other private companies.

“It is the elected officials’ job to adequately fund public parks — not private businesses,” he said.

A city Parks Department spokesman said the idea is under serious consideration.

Of course it is! It lets them off the hook for proper funding and that's more money that can be funneled into tweeding programs and developers' pockets.  Why do these pols think they are entitled to treat public parkland like it's personal real estate to make a deal with?  And this comes just in time for the third project to be revealed.
Posted by Queens Crapper at 12:09 AM

Has anyone recovered any of the money that Estelle Cooper stole?

Notice the use of the term "low income immigrant community"....very telling!

It looks like another racist agenda to disenfranchise minorities by letting their park go to seed and become a dangerous place to play or relax in.

BTW,
what's the ratio of cops assigned to FMCP when compared with Central Park...huh?

Then we also allow the USTA and the MLS to drive out the "undesirables".

Techniques for hollowing out a neighborhood and encouraging certain people to leave comes in many forms.

After this "ethnic cleansing" is completed,
hipsters with money can move in.

That's when FMCP will get a major facelift.