Methinks her dad protests too much

Disgraced City Councilman Dan Halloran preyed upon the “naive” staffer with whom he carried on a yearlong affair — and should rot in jail, the woman’s father told The Post yesterday.

“He took advantage of a naive 19-to-20-year-old girl,” Meaghan Mapes’ dad, Walter Mapes, said of the pol, who is charged with trying to bribe state Sen. Malcolm Smith’s way onto the GOP mayoral ticket.

“What [Halloran] did to the public is nothing like what he did to me and my family,” Walter said outside the family’s home in Howard Beach, Queens.

The Post reported yesterday that Halloran, 41, spent about two nights a week shacking up with Meaghan at her Queens home near St. John’s University, where she attended classes while serving as Halloran’s deputy chief of staff.

“I was completely unaware of it,” said Walter, 48. “I knew nothing more than [Meaghan] was the deputy chief of staff and that they worked together; that was all that I knew.”

So dad had no idea what was going on?

His comments on this Facebook thread from September 2011 (since deleted) are very interesting, then. 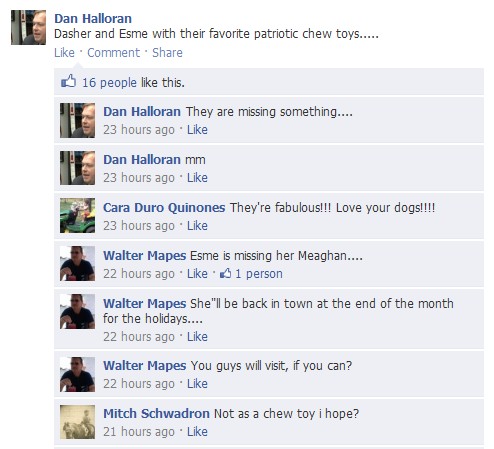 (The photo has been omitted to protect the innocent canines.)

That's right, Queens pols. I'm watchin' ya!
Posted by Queens Crapper at 12:21 AM

Daddy Mapes must have been in deep denial if he didn't get an inkling of what was transpiring between
his "naively innocent" daughter, and twice her age, beer bellied Dan.

Come to think of it, Meaghan's title "chief of staff" is rather ironic.

She was definitely chief of Dan's (pagan chieftan's) "staff".

What daddy? Meaghan had three mommies.

The dogs went to the office with the Councilman. They may have been privy to what went on there.

lombardi is a little napoleon Douche