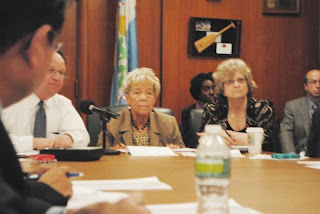 The USTA’s proposal reached the Borough Hall-stage of the Uniform Land Use Review Procedure during a Borough Board hearing on Monday before it winds its way towards a vote in the City Council and a hearing before the City Planning Commission.

But the gathering abruptly ended with a touch of confusion, as the various community board chairmen and women and four City Council members left without conducting a vote due to the lack of a quorum.

The unusual move was propagated by a dearth of the 12 eligible voters needed, falling short by one City Council member. The math for a quorum calls for at least one person more than half of the 22 eligible voters in the USTA’s case. A dozen would have put a vote through — a vote the USTA may have lost.

The absence of 11 lawmakers came on a day when the City Council had no scheduled hearings after 2 p.m. and no stated meetings.

Councilmen Danny Dromm (D-Jackson Heights), Peter Koo (D-Flushing), Donovan Richards (D-Rosedale) and Ruben Wills (D-Jamaica) were the only members of Queens’ council delegation at the meeting. All four were set to vote “No” on the project, according to a source close to the City Council who asked to remain anonymous. Had a fifth member of the council delegation arrived to reach a quorum, the three opposing community boards and four councilmen would have combined to deliver a 7-5 no vote, the source said.

The lack of a quorum did not come as a surprise to at least one person, as Marshall’s statement before the board indicated a lack of voters even though it was prepared ahead of the meeting.

A vote is not necessary in order to proceed with ULURP, and the borough president plans to submit a recommendation on Thursday.

Several members of the Borough Board said “Let’s vote anyway,” with some murmurs of phoned-in votes but those calls were quickly shot down by Community Board Director Barry Grodenchik, who invoked procedural rules in stopping a vote.

The absence of lawmakers came at a delicate time in the negotiations between the city and the USTA. Councilwoman Julissa Ferreras (D-East Elmhurst) will be the guiding vote on the matter, as the USTA’s facilities fall within her district. Her vote at the Borough Board would have shown her cards too soon, sources say. And in the annals of councilmanic politics, it’s considered bad manners to speak out on an issue outside one’s district before the presiding lawmaker takes a stand. Which means bupkis for the USTA now that it’s moving on to the City Council.

I guess we know Grodenchik's position on selling parkland off to the highest bidder. Another perfect BP candidate! The Queens Chronicle summed it up in their editorial:

Think your vote doesn’t matter? Don’t feel bad — neither do those cast by members of the Borough Board.

That’s one of the nifty tidbits revealed by Monday’s canceled vote on the United States Tennis Association’s expansion plans. The board lacked a quorum you see — and somehow Borough President Helen Marshall knew it would ahead of time, as evidenced by her prepared remarks.

No worries, some members said, we vote without a quorum all the time. (Oops! Did we say that out loud?)

Well, this time they didn’t vote. But that didn’t hold up the plan, oh no. Marshall will just approve it herself.

Why do we waste time and money on sham votes by sham boards that mean absolutely nothing in the end?

My sentiments exactly--why do we even need community boards in the first place? They drain our tax resources, while offering us citizens very little in return.

Most CBs function as TOY GOVERNMENTS full of TIN DEMAGOGUES! Their purely advisory votes are laughable!

We don't need borough presidents either.
They're part of the illusion of us locals--taxpaying voters--participating in NYC's governmental processes. It's all smoke and mirrors--BS thickly spread on a Ritz cracker!

The only time that a citizen has real power is in the polling place on election day.!

We know in the end both Emperor Bloomberg and the BSA will be calling all the shots. Queens borough hall serves only to rubber stamp most development projects.

I have some thoughts on alternatives to community boards, which I will put on hold for the moment.

But that befuddled dimwit will awaken sharply when either Alex Rosa, Irving Poy or Barry Grodenchck, pinch her arm when it's time for her to speak.

Mediocrity and crookedness is what Queens is best known for.

BTW, where is Chuck Apelian these days?
He was absent from CB#7's last public hearing.

I wonder if Vallone's law firm will be representing him, when the FBI comes sniffing at his ass.

Thw park/s future comes down to the whims of Council woman badonkadonk from Corona?

Hiram must be proud

The Council member members of the Borough Board rarely attend. Mostly it is just the Community Board chairpeople who show up.

Moreover, considering the significance of the USTA application to Queens and to the park, you would think that Queens BP Helen Marshall – who is the leader of the Borough Board – and/or her staff would have worked the phones and ensured that there would be adequate attendance and a quorum at the Borough Board meeting. That Marshall and/or her staff did not obtain the necessary quorum suggests either that they preferred there not be a quorum so as to avoid a vote outcome with which Marshall would disagree (a shameful manipulation of the meeting), or incompetence.

Wonder if a Sandy Annabi deal (a la Ridge Hill) is in the works for Julissa Ferraras?