When the minority ruins quality-of-life for the majority 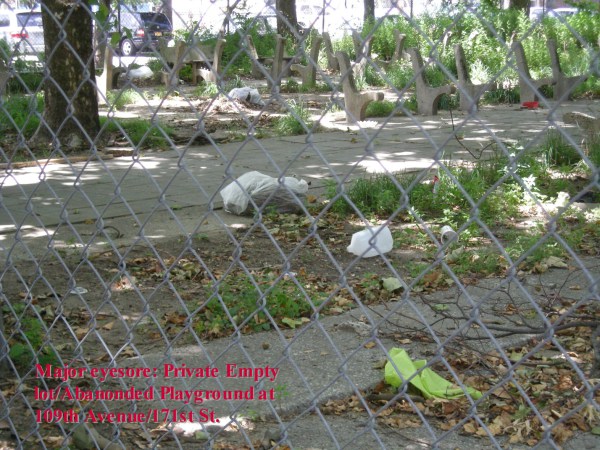 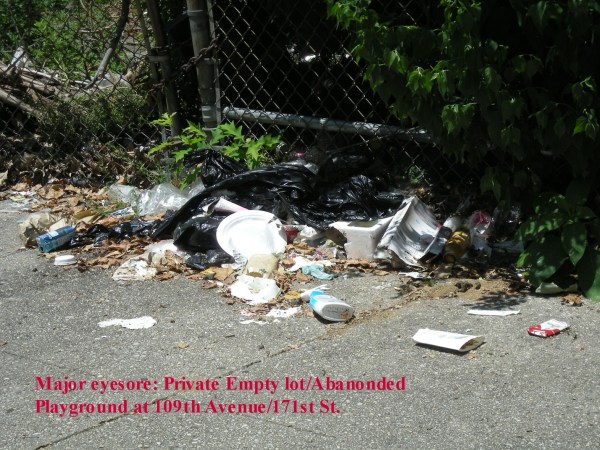 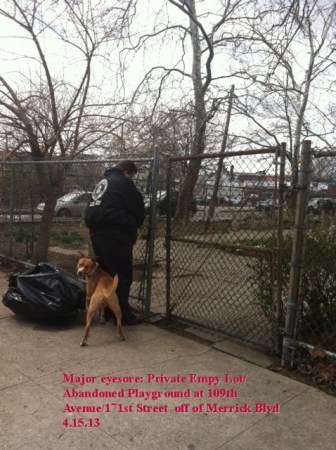 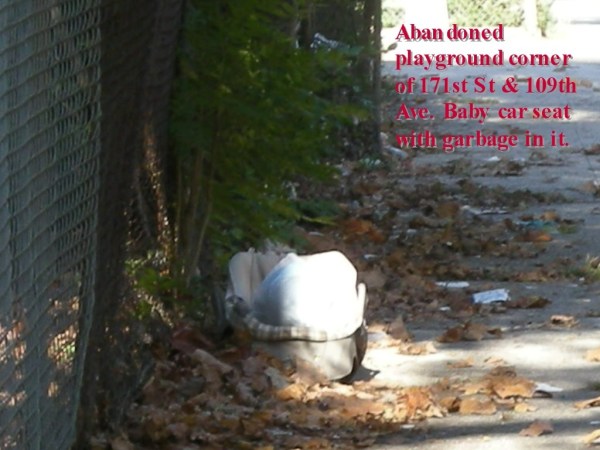 This is in regards to a notorious private empty lot/abandoned playground (109th Ave/171st St) that has been on the radar for several years but nothing seems to really get to the root of the problem and the owner of this lot who supposedly live across the street at the apartment building 109-15 Merrick Blvd.

This is a major eyesore in the community that does not seem to get resolved. DOS will come out to clean it, only for the same thing to happen again and again and again. This private property was once a playground back in the 70's, but not city owned, and since has deteriorated over the years and basically just has a rusty old sliding board and concrete remains of what was once benches. Although gated, at one time it was not locked, but it seems that several people have the key to the lock as the one photo indicates where the individual is bringing his dog in to take a big shit and not pick it up. Many people, which I have witnessed, take their dogs there to shit and never pick it up. Also people dump garbage inside it (which you can see the garbage bag next to the guy and dog) and garbage is always being dumped on the sidewalk surrounding the lot. I have seen mattresses, air conditioners, baby car seats, garbage bag, food, wood, etc.

This lot was also featured last summer in a WPIX Help Me Howard segment. Community activist Pamela Hazel (who took the photo of the guy bringing the dog in the other day) was interviewed by the Queens Chronicle way back in 2010 in regards to this lot and others.

Yet here it is several years later and the community is still dealing with this shithole eyesore that is not only a quality of life issue but also a hazard with all of the old playground debris. If this lot was in the West Village, Chelsea, Long Island City, Forest Hills, Park Slope, Brooklyn Heights or downtown Manhattan, it would have been taken care of from the day before day one. But here in Jamaica, our elected officials and city leaders have dropped the ball yet again and another eyesore continues for years. They might say it is private property BUT NYC Administration Code §16-118 (2) (b) requires that property owners/managers keep their vacant lot(s) free of garbage, debris etc. Violating this code carries a penalty of $100 - $300 per offense.

So why it this lot and others like it in Jamaica a continual problem? I have to give kudos to the Department of Sanitation, they do respond quickly and take care of the issue, but our local politicians need to change the laws that keep getting in the way of the DOS and let them do whatever needs to be done as far as private property and empty lots go. STOP MAKING THEIR JOBS DIFFICULT by placing restrictions on them of what they can or cannot do to make sure something gets cleaned up right away and the owners are held completely accountable.

By the way my email the other day with all the garbage in those empty lots in Jamaica Estates, got clean-up right away according to Marie Adam-Ovide, District Manager of Community Board 8. Now see if you see a pattern with these eyesores and others like it nearby:

I can go on and on with this pattern.

Funny how a small minority of people are making life so miserable for the majority of Jamaica residents and very little is being done.

Unbelievable conditions.
When was the mayors SCOUT quality of life scooters out in Jamaica last? Joe , you should ask. Community board should know.
They are supposed to go through every street of the Boro at least once per quarter and note various conditions back to 311.

Trying to find out who actually owned this small parcel of land turned into a huge mystery that nobody seemed to know who it was. It seems that this parcel of land at 109th St/171st at one time belonged to the big apartment complex across the street, but years ago when the complex was sold to a realty company, Pistelli, they only bought the apartment complex, but not this vacant lot. Eventually after leg work from others, the owner was eventually known. The slumlord of this property is David Crown Landau Realty in Brooklyn. When I called them to report the conditions, his answer was "We sent someone out there a couple of weeks ago to clean it up". Like cleaning up a piece of property (normally only when you get called on it) is called maintaining your property and making it sure it is free of debris. Now this is the time of shit that the city needs to somehow change and no longer tolerate. Could you imagine this property in Long Island City, Chelsea, West Village or Park Slope looking like this.

Looks like the property owners learned to care for their properties in the country of their origins.
Queens being made into a Turd World nation.

This is your best piece here on Queenscrap so far. Keep up the good work!

You let the trash of foreign countries in how can we surprised how they deal with trash.

I thought that College Point held the title of "Garbage Point". I stand corrected.

Certain "minority groups" have made Jamaica the center of crap 'n crime!

Let's face it, southeast Queens is one of the most undesirable places to live in the borough.

Hey Joe,
Could you please shorten your posts....just a wee bit.
They are hard to read on my iPhone
Thanks