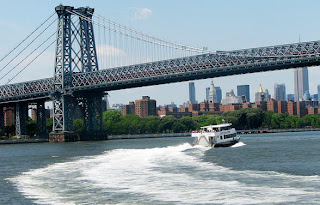 U.S. Sen. Charles Schumer (D-N.Y.) said the federal government plans to provide more than $1 billion toward an expansion of ferry service to points including Astoria and Brooklyn Bridge Park and he urged appropriation of more funding for the project.

“The East River Ferry expansion project can become a ‘nerd boat’ linking our rapidly expanding tech hubs like Dumbo and the Brooklyn Navy Yard with the new Cornell-NYC Applied Science campus,” Schumer said. “It will also maximize ferry use throughout the city and better connect these waterfront neighborhoods to public transportation. This would benefit the local economy and that’s why projects like this should be considered for funding.”

A nerd boat? Oh come on, what is this really about?

Schumer said private developers are planning 4,000 units of housing on the waterfront of Hallets Point in Astoria in 2015 and that expanded ferry service would benefit vast numbers of new residents.

Ah, that's more like it. It's all about subsidizing developers.

City Councilman Peter Vallone Jr. (D-Astoria) praised the proposal. The plan would include a ferry stop in Hallets Point and Vallone called for more ferry stops in Queens.

Now his buddies can build at Halletts Cove! Remember this?

Vallone said his vote for approval of the projects will rely on whether the city is willing to augment public transportation in the area through increased bus service and a ferry stop.

Lincoln Equities, the developer of the Hallets Cove property, was represented by the lobbying firm Constantinople & Vallone, which counts Vallone’s brother Perry and father, Peter Sr., as principal board members. The city lobbying database shows that Constantinople & Vallone had disbursed $215,000 on behalf of Lincoln Equities to city agencies for real estate concerns since 2009.
Posted by Queens Crapper at 12:09 AM

Lincoln Equities, the developer of the Hallets Cove property, was represented by the lobbying firm Constantinople & Vallone, which counts Vallone’s brother Perry and father, Peter Sr., as principal board members. The city lobbying database shows that Constantinople & Vallone had disbursed $215,000 on behalf of Lincoln Equities to city agencies for real estate concerns since 2009.

and your subway/bus ride isnt subsidized?

Has nothing to do with being subsidized. There is no need for a ferry. The fact that the ferry stop was what was holding up Vallone's support for the projects at Hallets Cove, and then all of a sudden it happens in order to foster the development is kind of interesting, don't you think?

I run a small creative office for a media company in DUMBO, and of our 12 employees, 3 take the ferry to work every day. Same is true for quite a few of our neighbors, with the boat providing the best transport option from points north (for those that don't want to risk life an limb on a bike on Kent).

I've lost numerous staff members over the past 15 years here to commute frustrations, and the more ferry service there is, the more attractive a DUMBO workplace is to the creatives in Williamsburg, Greenpoint and Astoria. (Seems a way nicer commute than any subway, or than my daily 2-legged commute through the gray misery of Downtown Brooklyn)

So while I know the cliche blame-the-developers battle cry is way sexier, I'm definitely willing to give the benefit of the doubt to Schumi, seeing how important the commute between these creative centers is.

"1 billion toward an expansion of ferry"

That's 600 million from the feds and 400 million borrowed from somewhere like China.

ferries are cheaper than building new tunnels and upgrading the signals to handle more trains per mile.

People aren't going to use them. Who is taking the ferry back and forth from Hallets Point who won't live in a luxury condo?

So wait...the "nerds" are gonna live next to the projects at Hallets Cove? Is this the crap that Schumer wants us to swallow?

Ferry service was discontinued 100 years ago because the subway can move more people faster and cheaper.

All the mass transit that used to have spurs running to the waterfront were torn down, so now when you step off a ferry you have to hike to get anywhere.

They are not a green form of transportation, and are terribly inefficient catering to a small group of people that have elected to move into brownfield areas that are out of the mainstream commuting network.

Yes, in plain English, yet another example of how politicians are taking taxes that were paid to benefit our communities and giving them to a small elite to satisfy campaign donations from developers and their tenants.

Communities have to suffer starved for tax revenues. For examples, see pictures of Jamaica on other places in this blog.

Will it run in winter months?
LOL!

Now your real estate investment, the promised good life of condo living, isn't turning out to be what the salesman had promised you.

Try reselling your property and see what you get.
I'll bet you take a loss.

Now if you were slick enough to buy a Manhattan pre-war unit, you'd make a fortune on its resale.

But, alas, you bought into an "almost Manhattan" substitute in Queeensburb!

Good luck living in the boonies.

My kid beat up your honor student. No more nerds!

Bloomturd is a nerd, see what that got us. Now he build more schools for them.