No resolution to Astoria BSA nightmare 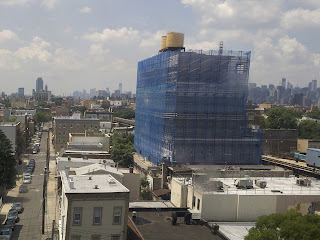 For the third straight hearing and the third straight month, the Board of Standards and Appeals declined to vote on whether to grant a zoning variance for a medical building on 31st Street in Astoria, instead postponing the decision again until next month.

The project’s developers and the neighbors who live behind the building have been fighting for years over substantial damage to the neighbors’ homes that they say was caused by the facility’s construction. The neighbors are also worried about noise, light and air pollution they say the structure and the 135-car parking garage may cause.

There is currently a stop-work order on the building after the Department of Buildings found last year that the building was built 10 feet too deep into the rear yard, in violation of zoning regulations. Pali Realty, the developer, can’t start work again until it obtains the zoning variance from the BSA, which has given the neighbors the opportunity to voice their concerns.

The case is a bit unorthodox because if [neighbor Robert] Draghi had not used a little-known maneuver through the city’s bureaucracy, he may never have been in the position to negotiate with Pali Realty at all.

The developers had been ignoring Draghi for years, he said, and last summer, Draghi and his wife decided they’d had enough of empty promises from contractors and inaction from the Department of Buildings and Councilman Peter Vallone Jr. (D-Astoria).

So they used what Draghi called their “last resort”: they went to the DOB to demand an audit of the near-completed medical facility in person. Draghi said they had to do “tons and tons of research” before finding that the audit was an option.

Vallone said he was unaware of the audit process but is glad Draghi used it. Though he never got personally involved, his staff had been working with Draghi and the other neighbors. Vallone said he is “extremely upset” about the situation.

Peter Vallone been a city council member for almost 12 years and didn't know that the DOB audits projects? Every civic person in Queens is aware of this. And he admits that he never got personally involved? Why the hell not? Maybe he wants to be our borough president so he can personally walk across the hall and tell the Queens DOB to lay off his friends' projects.
Posted by Queens Crapper at 12:13 AM

Who owns this Pali and what's the Vallone connection ? Hmmm

Wke up!
Learn to identify the real villain in this piece.

If la famiglia hadn't been busy selling out Astoria on a wholesale basis, this wouldn't be happening.

Who will Don Petey Vallone screw next if he becomes borough president.

YOUR NABE IS NOT IMMUNE FROM THE LONG ARM OF THE VALLONES!

The northeast should be very vigilant of figlio Don Paulo Vallone!

Do you want a well documented, well compensated ($$$$$$$$$$) developers' lobbyist representing you in the city council?

Well Crappy, the problem is simple.

While some nitwit is posting - even here - that western Queens is an overdeveloped dump and there is nothing that can be done about it (because its not, for example, the nirvana known as north east Queens) the message is clear.

As long as attitudes like that are expressed even here, there is little hope that those people have any chance of fighting this.

The understanding is that the people in each area are little better than surfs under their councilman.

That is bad enough.

But the really stupid thing is that people outside the area are too polite to get involved.

Even more inane is that while they are poking fun at the people suffering, they do not take the person responsible for this to task - as he is running for a higher office that now includes their district.

My civic initiated an audit/stop work order against an illegal construction site... the foundation had been poured. The job was held for more than a year, then work proceeded again. No BSA, and on top of that, the DoB granted variances to allow construction of "a Sam's Club during hours that would not impact customers" blah blah. It was, btw, a garage. Crappy, Vallones and Hallorans are NOT a requirement for ineptitude, incompetence, etc. Just an administration that supports commercial development above all else. Can't WAIT til he's gone... and please let's not replace him with Quinn.

I cannot understand why the DOI or FBI have not yet been involved. Alleged conflict of interest from the CB1 architect members while working for the developer, and a building suspiciously overbuilt under everyone's noses until an audit was finally conducted, and that authorized only under extreme pressure.

This is hillarious, you mean to tell me that the same two architects serving on CB1 assigned to protect the zoning interests of the community also worked as architects for the developer and never realized that the building was built beyond the zoning restrictions?

Just to eliminate any confusion on "conflict of interest" I think it would make sense for the DOI to investigate the phone records of the CB members leading up to the CB1 variance vote meeting and audit all other projects designed by any CB1 member constructed in the community. This would set the record straight.

That jealous Ass-torian is still railing against our good life in the northeast Queens.

Move here and shut up, if you can afford it.

You westerners never come to our aid...
though we've come to yours.

So, blow it out your ass, fella!

Truth be told, this could've easily been an honest mistake. But in abscence of any other views in the media other of the ones affected, anyone could easily come up with their own conclusions.
However, as in life, mistakes wether intentional or not always have a price to pay and this should not be any diferent.

As this matter seems to be coming to closure with it being in the hands of the legal system to resolve, so will my comments on this matter and blog. Based on the affected neighbor’s eloquent depiction of events (which include no surprises and where most opinions were derived from) and terms for settlement that were posted on Queens Crap on May 4, it seems very reasonably likely that the building will continue as long as the property owners are made whole. And this is the most logical thing to happen, the rest are details. A difficult situation for the BSA to resolve, and a painful ordeal for all those involved. Good luck to them all.