This woman cannot be trusted 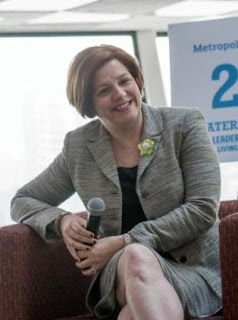 A group of citizens bands together and takes out an ad criticizing a candidate running for mayor. The candidate who is the subject of their criticism — City Council Speaker Christine Quinn — is stung by it. She believes it falsely characterizes her positions.

But instead of just responding, which of course she has ample resources to do, she takes steps to prohibit the critical ad from appearing. First, her campaign’s attorney threatens the cable company on whose network the ad ran, suggesting that it could lose its license if it continues to run the ad. Then Quinn writes to all the other mayoral candidates, asking them to join her in condemning and rejecting all such ads by independent citizens or groups of citizens operating outside of the city’s campaign financing system.

In other words, only the candidates themselves and established media outlets, like newspapers, can offer their opinions in elections. Citizens should not have a voice. Or if they do have a voice, it should only be muted, never amplified on the airwaves.

What Quinn is proposing is exactly what the founders of our country tried to avoid when they passed the First Amendment, guaranteeing all Americans — not just candidates and newspapers — the right of free speech.

Who does she think she is? Quinn can reject contributions to her own campaign from sources she doesn’t like. But she cannot reject what I or any other New Yorker wants to say about her. Nor can she “reject” my right to band together with others of like mind and voice our opinions. That’s what free speech is, and it’s the oldest tradition of liberty we have.

Richard Nixon infamously sought to target and punish his critics. Rudy Giuliani set a city record for being sued for violating the First Amendment. We don’t need another mayor with this little respect for our traditions of free speech, or with so little regard for the First Amendment that she would respond to criticism by trying to repress it.
Posted by Queens Crapper at 12:42 AM

P.S.
We haven't had democracy in NYC since Mayor La Guardia left office.

Make sure that you voters don't replace Emperor Bloomberg with Czarina Quinn!

Even a ranting, power crazed wannabee, can't slam the door on the truth.

It's out there, and it's headed down the pike real fast!

The U.S. Constitution was framed, in such a way, to prevent despots, like Quinn, from trampling upon a citizen's right to free speech!

If you can't take the heat, Chrissy, get out of politics!

She is a Nazi.

Anon #1 I thought you were talking about Hillary! Clinton. :~)

Jimmy Vam Bramer is no different. That man is a publicity hound that goes off the edge if he is slighted or any of his homeboys are disrespected.

Cuts funding to anyone that actually thinks the free speech is a right.

Its common knowledge that in Queens we have fear about speaking up on the politicians.

Many people in this borough come from cultures where you can get in deep trouble for saying things - a fact that the Democrats play to their advantage. Whole neighborhoods act like they are in a witness protection program when conversations drift into politics.

We need to push civics education so the public can learn abut their rights as much as we push development and the rights of devlopers.

Wow- so it's clear that homophobia is alive and well on this site! There is no "perfect" person involved in politics (and LaGuardia was no angel!), but given the candidates and choice we have for Mayor- I'm voting for Chris.

She's a carbon copy of Mike Bloomberg. The press won't say anything negative about him, because he'll ban them from important press conferences. Quinn will do the same. She's not even mayor yet and she's using bully tactics to shut people up. The truth about her is out there. Will voters bother to learn the truth about her? Vote for anyone but Quinn.

So Christine "I'll Cut Their Balls Off" Quinn can't take a dose of her own medicine?

Sorry, madame speaker, you let the civility horse out of the barn a long time ago.

"....asking them to join her in condemning and rejecting all such ads by independent citizens or groups of citizens operating outside of the city’s campaign financing system."

Aside from personal mixed feelings about Quinn, I agree with this statement.

Since the disastrous Citizens United decision the public airwaves and print have been flooded with slander and half-truth from shady front organizations, often run by business interests.

What it appears that Quinn is suggesting is that those who run political ads -identify- themselves and who they really represent.

If exposure is against these front group's true agenda...TFB.

My vote goes to Anthony Weiner!
Liu is out of the picture despite his delusions.

Compared to the likes of Jimmy Walker, Ed Koch, Emperor Bloomberg (yawn) etc.--Fiorello was an angel.

Get used to nastiness - Quinn is just that and people will find her demeanor off-putting, this alone will sink her ship. I have more but this space is small.

Because of her vindictive, shrill personality, Quinn is not going to win the primary because I think a dark horse candidate will enter the race and pull enough votes from her to enable another candidate to win. I think female voters will maybe look elsewhere and pause before they vote for Rosie O'Donne..er..I mean, Christine Quinn.