Shark fin soup may soon be a thing of the past 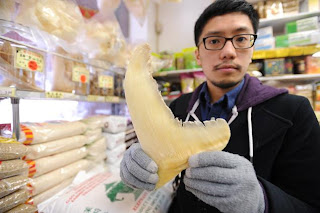 The bill now heads to the Assembly, which passed the same measure last year, only to have it die in the Senate without a vote.

If the bill is again approved by the Assembly, where it enjoys sponsorship from 43 of the body’s 150 members, it will head to Gov. Cuomo’s desk.

Environmental groups estimate that 73 million sharks are stripped of their fins and dumped back into the ocean, where they sink to the bottom and drown. The fins are then used as the main ingredient in the Chinese delicacy shark fin soup.

Since California and four other states banned the sale, purchase and distribution of shark fins, New York has become the leading hub of trade for the coveted product in the United States.
Posted by Queens Crapper at 12:01 AM

There will be big black market trade arising for this "delicacy" in Flushing, for sure.

Oh wow, that is a relief.

Now on to election reform.....

you will never really get rid of it completely with the way the savages in asia think about their penis-power foods all the time.

the more endangered the species, the more penis-power it packs!

Might as well try this shit before its outlawed.

Shark-fin soup is part of their culture.

What happened to celebrating diversity ?

Just because it is part of their culture doesn't make it right. It is a barbaric practice that results in mutilating living creatures. Let's bring back headshrinking, tarring-and-feathering, and other historic "traditions" I look forward to outlawing pate de fois gras also, whose production necessitates force-feeding the duck and shoving food down its throat, just to indulge some food snobs and "gourmands".

Cultures are supposed to evolve.

"Just because it is part of their culture doesn't make it right."

Who decides what is evolved?

The general consensus of the public is what decides it followed by laws passed by legislative bodies. Genital mutilation and honor killings are also cultural, but wrong and illegal in this country.

Are you saying we need to keep people out of our country that want to keep their culture alive after arriving here ?

If so we need to address our immigration programs and really need to handle the US refugee program. This is a UN program that places requirements on where we can bring refugees in from. From Wiki -

In Taiwan (the corrupt cesspool of the Orient) an American would be arrested for breaking their laws!

Here, like it or not you ignoramus, American laws are to be followed by American citizens or permanent resident green card holders alike.

What your previous country of origin calls "cultural" doesn't count if it breaks the law here.

In a lot of Oriental cultures, whore houses are a bane of existence. Here they're illegal.

Get it now, you big footed barbarian?

There are too many mongrels entering the USA from sleazy, corrupt or murderous countries.

Immigration reform, which include serious background checks, is long overdue.

Attaining US citizenship, should be like going through high school.

Freshman...sophomore...junior...and finally, senior status, is granted as the applicant proves his worth.

Get convicted of a crime, and you are bounced back a level or two.

Becoming an American is a privilege, not a license to abuse the system.

According to AG Holder becoming a citizen is the RIGHT of an illegal alien.

Think about it. The lunatics are running the asylum.

We also have the US Dept of Agriculture working with the Mexican government to distribute a spanish language document for distribution in Mexico explaining that the US does not check a persons immigration status when applying for food stamps.

Hey guys, come to America we'll feed you for free !

Only reason I can figure is that they are future Democrat voters.

No one is trying to take away the rights of Chinese culture to celebrate their traditions; their is a bigger issue at play--saving this planet from complete demise. Sharks are VITAL to the health of the oceans, and subsequently, the health of the entire planet ecosystem. Over 100 MILLION sharks are being killed every year. Thousands every single say. THIS IS NOT OKAY. Cultural traditions are irrelevant in a globalized world where animal species are being decimated by over-fishing, over-poaching, over-killing and over-exploitation, for the unnecessary benefit of the over-populated human kind. Cultures no longer have the right to make claims over a species of animals to feed their traditions. We live in a globalized world and laws and "traditions" need to changes accordingly.