Desperate times call for the Nation of Islam?

Ray Cameron and the "Southeast Queens Host Committee" (quite frankly, no one I've spoken to in SE Queens has heard of it) are apparently hosting fundraisers for both William Thompson and John Liu at the law office of Jacques Leandre, a litigious failed candidate for City Council and proud Nation of Islam member. The Nation of Islam is categorized as a hate group by the Southern Poverty Law Center, in case you weren't aware. 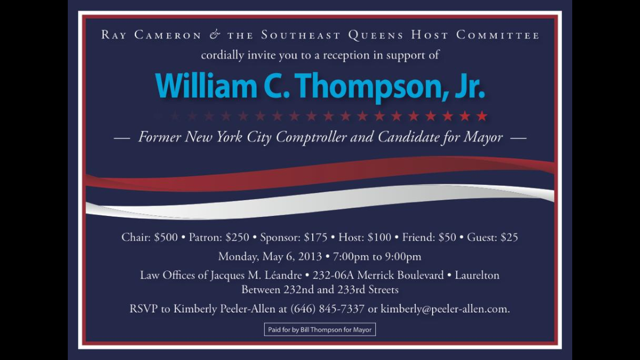 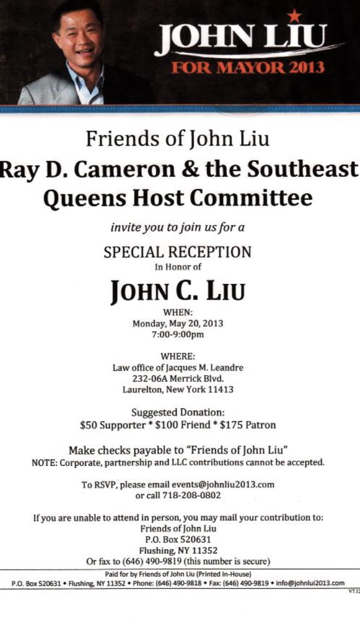 Which candidate is the "Southeast Queens Host Committee" actually supporting? Why do Liu and Thompson condone being two-timed? Why are they comfortable rubbing elbows with a sleeper cell?
Posted by Queens Crapper at 12:17 AM

Embarrassing. A host committee is just a group of people who have pledged to raise money for an event. Both candidates happen to have host committees for Southeast Queens events. This is like asking if "Friends of Bill Thompson" are really his friends.

Not that I like Nation of Islam, but SPLC jumped the shark on hate groups a while ago. The have 'pick up artists' (guys who share tips on how to pick up women and have sex with them) as a 'hate group' (They hate women, dontcha know). Yeah, they are/can be slimy, but come one...

SPLC basically has become a 'if we don't like you, you are a hate group' group

No, there aren't two committees. Ray Cameron and the Southeast Queens Host Committee are sponsoring BOTH. Read the invites carefully. How can you support two candidates? By voting twice?

Charles, I don't see pick up artists on their list of hate groups.

Not to worry...Liu will be a distant memory after November. He will vanish into the trash heap of history.

These arrogant Taiwanese-Chinese insist on "keeping face" even when caught red handed.

I went to the Comptroller's website today - I actually have a business reason to do that - and I noticed that Mr. Liu is spearheading a campaign to get the NYPD to change its uniform policies to permit Sikh traditions. Maybe that's a perfectly fine positon... but WHY IS IT THE COMPTROLLER'S BUSINESS? I know, there's no such thing as too small a pander.

It is "Mr. Comptroller's" business, because he's desperate for the votes he thinks will make him NYC's next mayor.

That boy has been puffing too much opium, or his psychiatric prescription drugs are making him even more delusional.

Bye, bye Johnny...soon to be forgotten.

I'll bet he Crazy Glues himself to his chair,
so he can't be booted out of his office come November.

Hey Guys , we are not a hate group , my name is Ray Cameron, we are respectful members of the community made up of all backgrounds , I am a catholic and a proud dad of 3 children, I run a nonprofit group for children and saved thousands of youth from the living the life of crime. The purpose of these fundraisers are to bring attention to our community not hate , to advocate for expansion of Beacon After school programs , and jobs, that's it , doing our civic duty , and we want to raise money for all the candidates to show them we treat them equally and not to take our vote for advantage , Jacques Leandra is a great person who also saved many children with his youth program and a respected lawyer. The only hate group I see is Queens Crap

Mr.Cameron as an Asian-American and John Liu supporter, this was very embarrassing and shocking that you both have not been vetted by any candidates or any person for that matter! I find it odd that you pull out the race card and go into your religious affiliation and talk of your family, not to answer if Jacques Leandre is in fact in the nation of Islam? I don't care if he is a great person etc, the questions should be
1. Why are you both, using my candidate and others to help fill your pockets?
3. Why is a Law office having fundraisers especially with fiduciary information in it?
4. Who are the people on your committee?
5. Does the Government know of your organization/group and your purpose?

With all the fraud and corruption in Queens these days and Mr. Liu under a microscope it is another black eye and we need answers not smoke and mirrors!

Who is this Leandre person and why if he ran for office and lost twice and is alleged to be in the Nation of Islam, why is he hosting fundraisers out of a legal office with a Mr. Ray Cameron? Nothing racist, I just want real answers!

Sounds like another "Get rich quick Scheme" to me.

John or Bill Please help? I’m in need a few extra dollars, jobs for folks in my community in Hollis and some extra cash for my 501C3 however, I don't have a place to hold the event or a committee to hide behind... Mr. Cameron said in his response that he and Mr. Leandre specialize in getting candidates money from the community in the form of donations for jobs and funds for their organizations etc. Since you both like being “Pimped” Can one of you please get me a time slot at Mr. Leandre's so called prestigious Law firm because Antun's catering hall is to expensive! Thanks Guys!

I just received this link today from Ms.Wong and I'm Asian-American too,who is very very angry by this article. I can not seem to understand why Mr.Liu who is a great advocate for our causes and fights for us would stoop so low to this level and reach out to these types of people who are not on our level and only out to help themselves. These people are not good and represent selfishness for themselves. I hope he reconsiders this!