A Jamaica Sunday morning walk just a few blocks to they new and very clean Blink gym revealed another "Jamaica Revealed", the other side. Of course the "Jamaica Revealed" refers to the event that was held on April 19th which was about the development going on in Jamaica and a way to attract business owners to our community. Well these photos reveal the other Jamaica, the reality Jamaica that needs to be addressed, otherwise we will have problems attracting quality people and businesses to our area. Jamaica is definitely a "Tale of Two Cities", what the quality and visionary people here want and then the actual reality caused by many of our low class residents and poor leadership. Here are a few highlights of this dark side trip that was only a few blocks. 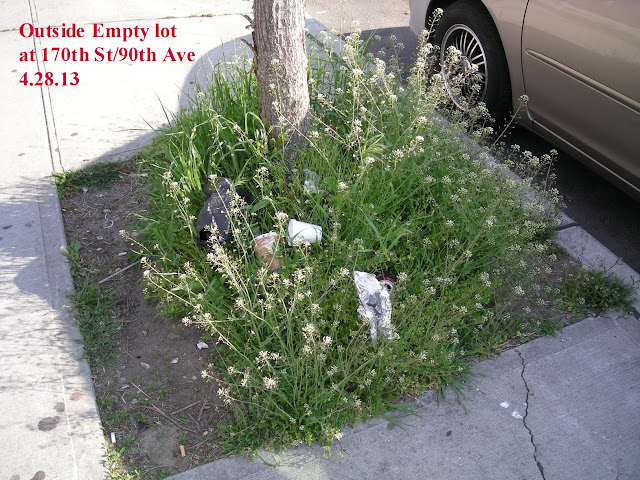 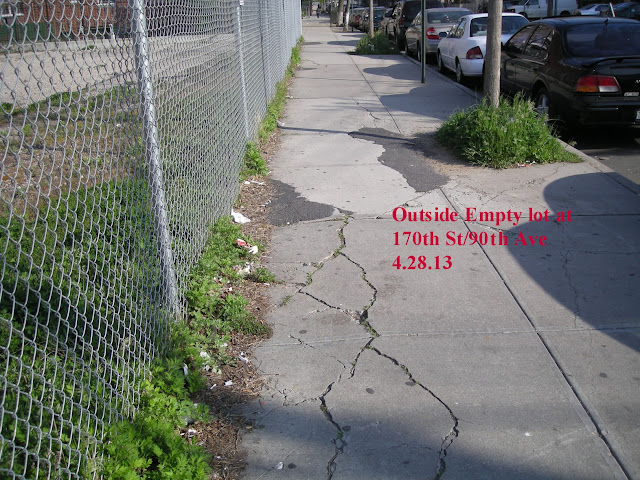 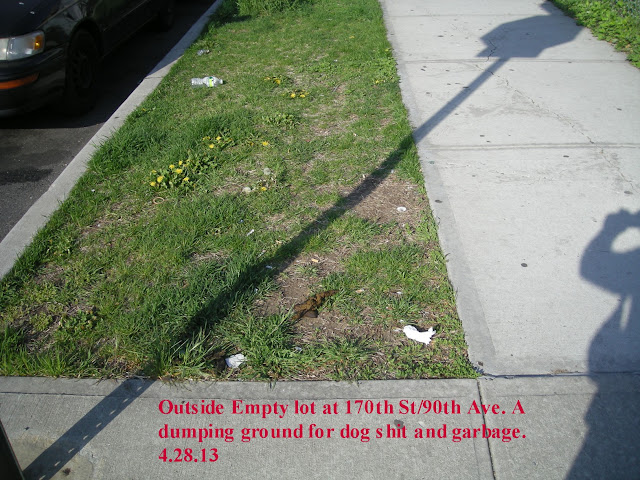 1.Empty Lot at 169-23 90th Ave. Problematic vacant lot, which is more problematic on the outside than the inside. Besides people dumping litter, the weeds are growing high on the sidewalks making it more attractive for people to dump because you cannot always see underneath, dog shit here all the time and the broken uneven sidewalk that I have reported three times to the Department of Buildings beginning before Hurricane Sandy. This is next to my co-op and I am always cleaning this up, but decided not to clean up for at least 2 weeks to show what happens when you do nothing. Just get the damn asshole low class scumbag owner out here. 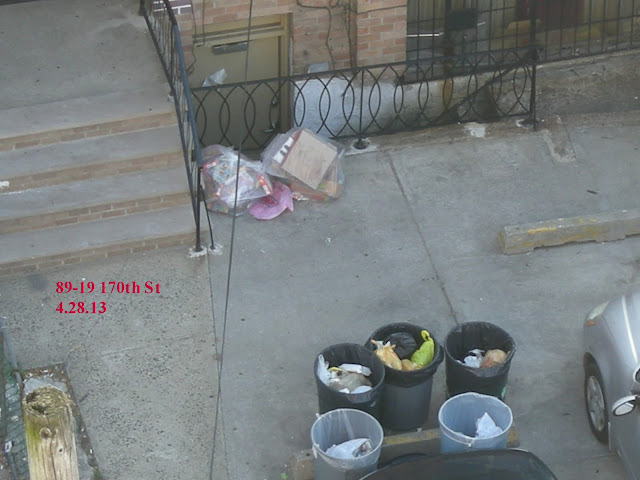 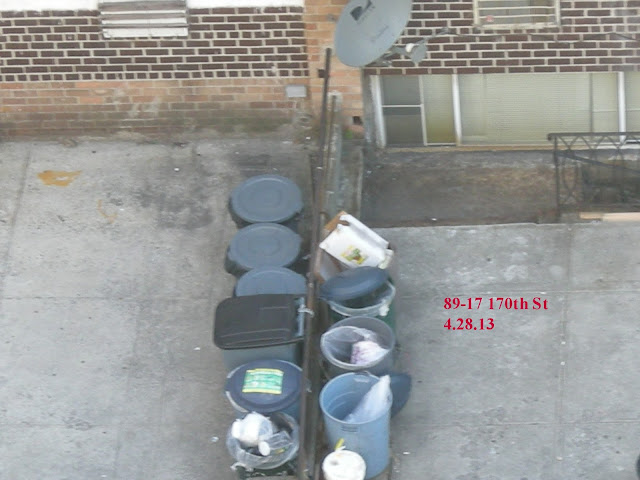 2. Low class problematic apartment building at 89-19 and 89-17 170th St across from me. I have been calling in this place to sanitation on a weekly basis, but the owners still do not properly store their garbage. Again get this scumbag slumlord owner out here. 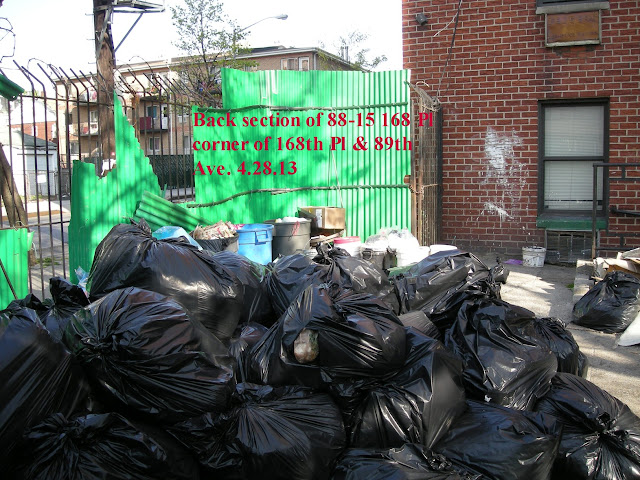 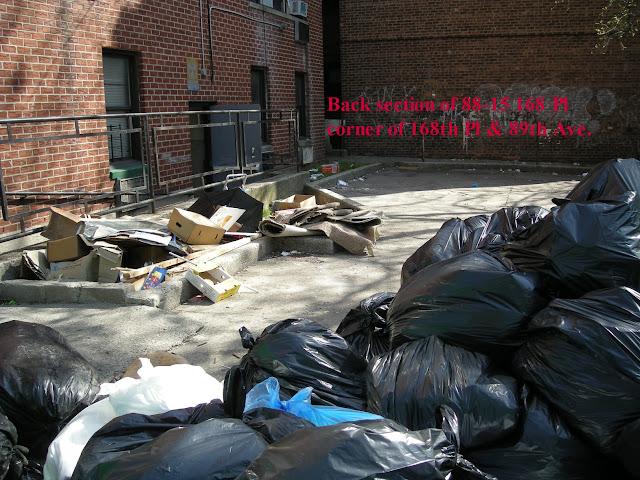 3. Executive Arms: Nice name for a low class apartment building at 88-15 168th Pl. On the back/side of building at the corner of 168th Pl & 89th Avenue where the garbage is stored, the photos show so many violations from broken bags to various garbage all over which are a health risk and attracts all kinds of rodents...................and low class people who feel right at home with this kind of shit. It is one thing if you could not see this mess, but this can be viewed from the sidewalk. 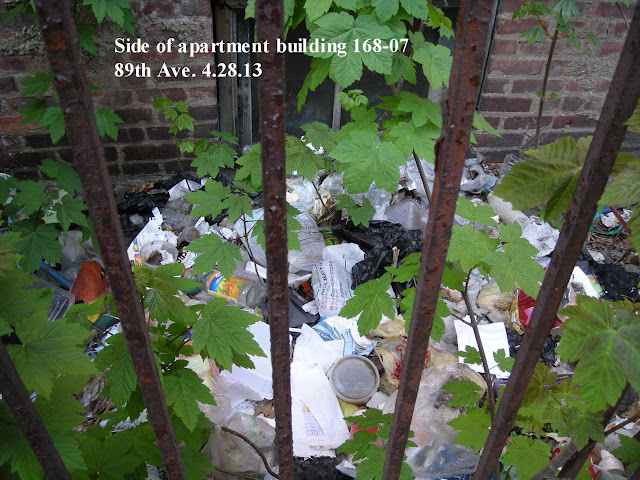 4. Moving right along on 89th Ave Skid Row tour. Apartment building at 168-07 89th Ave has cleaned up their garbage containers in the front, but the side of the building is a rodent's dream. 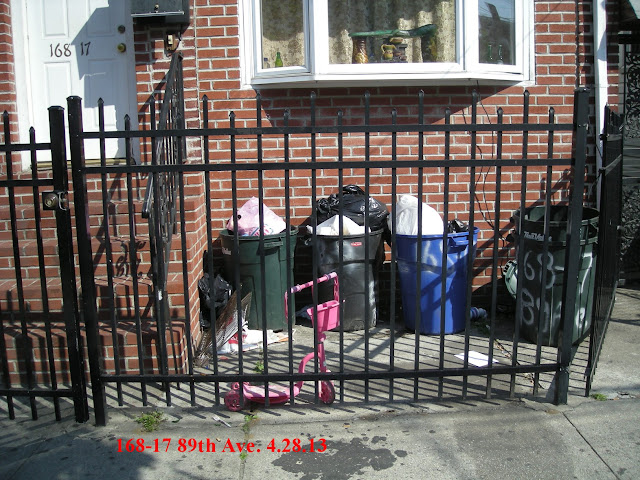 5. House at 168-17 89th Ave. Improper storage of garbage which attracts rodents. Funny, this was the same individual who complained to NY1 about his next door neighbor's garbage mess in the backyard which he said caused rats to come into his house. Ah, maybe the rats are coming from your improper storage of garbage in your own place. People who live in glass houses shouldn't thrown stones.......... or should I say garbage. 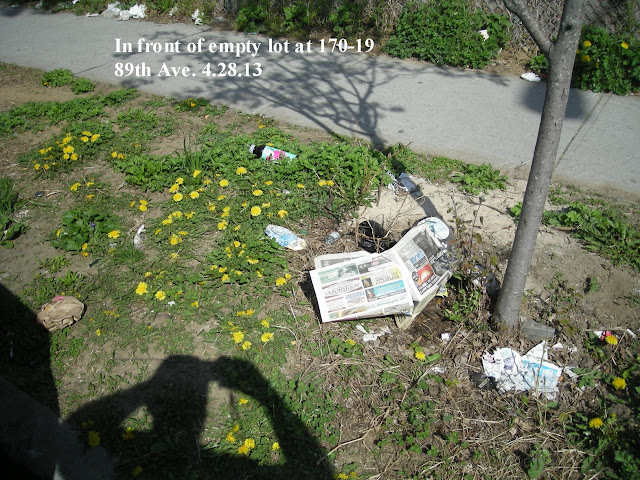 6. Front of vacant lot at 170-19 89th Ave which I have complained to Sanitation so many times, yet it is still a dumping ground. 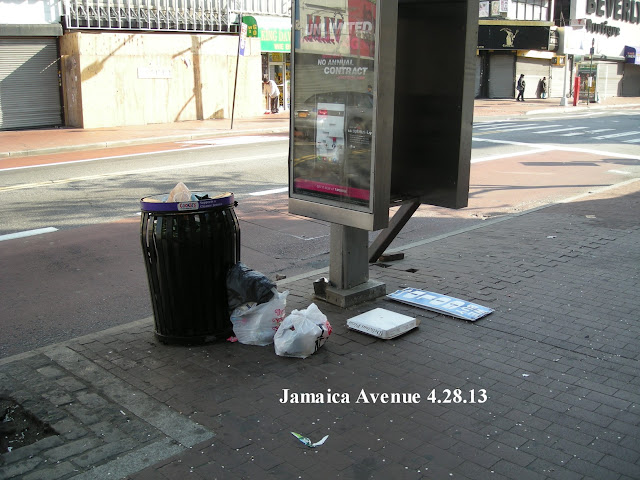 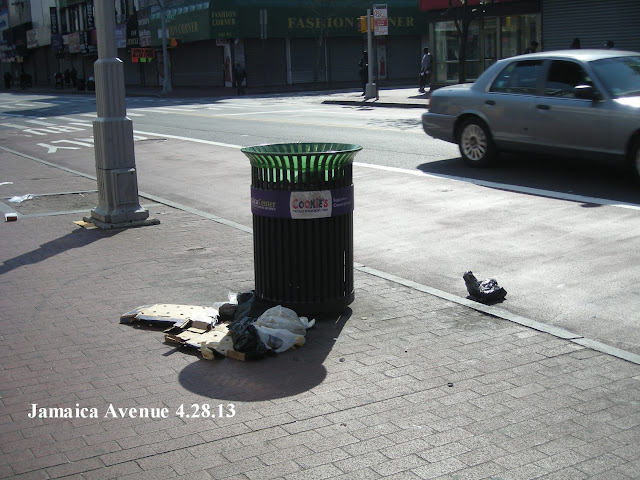 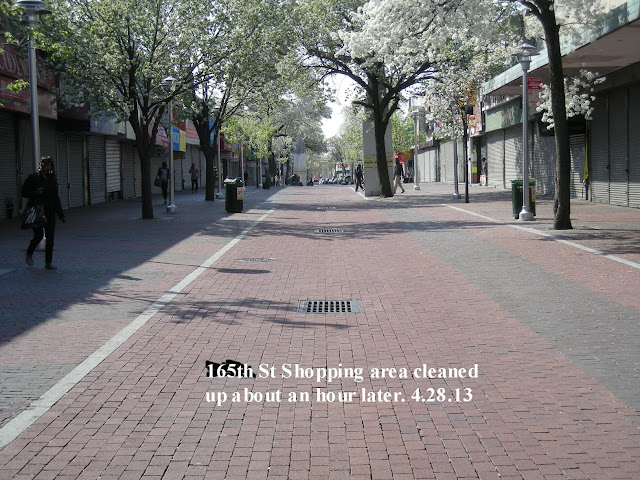 7. 165th Street shopping area off of Jamaica Avenue plus Jamaica Avenue itself. This was an eyesore Sunday morning at 9am. Now this is no reflection whatsoever on the 165th St Mall Improvement, Jamaica BID or Sutphin BID, because they are doing an amazing job. And after the gym I walked through here and the 165th Mall Improvement people were already on this situation and cleaning it up as the one photo shows. This is a reflection on the low class scumbag residents that we have and our elected officials who are not coming up with a solid action plan to combat this problem.

I just do not get this. 125th Street in Harlem does not look anything like this, it is not perfect, but nowhere in this condition. I have walked there on an early Sunday morning and have never seen what I see here in Jamaica and 125th Street has way more foot traffic than Jamaica Avenue, so why such a difference. Could it be that the people of Harlem actually have some pride in their community, something that is sorely lacking with the bunch here in Jamaica.

And talk about potential, the cobblestone street of 165th could be an unbelievable destination place with nice retail, nice outdoor cafes and restaurants instead of the many low class shit hole businesses that litter that area. I guess this shit just reflects our community. I mean you can still keep the urban flair but add cafes and nice retail into that mix. This could really be an anchor in Jamaica that would not only be a place for the quality middle class here in Jamaica but also a destination stop for people outside the area. Instead right now it is just a mess of mostly low class stores that just attract low class people and all their garbage that they bring with them.

These photos do not say "Invest in Jamaica", they say "Danger ahead, turn around and get the f*ck out of here as fast as you can." I mean if this sh*t is not low class ghetto behavior, I certainly do not know what is.

Now would the true leaders and visionaries of Jamaica please stand-up and raiser your hands. Okay, I did not think so. We will try again later. Class dismissed.

RATS!
It's looks even worse than Floo-shing Oriental province!

So much potential over the past 40 years....all thrown away. A damn shame.

Remember when all of NYC used to look like this?

Now increasingly Queens remains stuck back in the good old days while the rest of the city inches forward.

About 20 years ago they replaced the factory service centers and the like in our area with retail. You can clean our block and 12 hours later its littered.

A lot of immigrant families live on our block. In front of every building you can see garbage cans like this. The understanding is that you have to make people like this - as well as their absentee landlords - feel welcome.

As long as borough hall is silent on this, they give the signal that there is no pressure to change. The feeling is that they can put up with this until you get tired.

You need Queens Civic Congress to get away from tree pruning and love fests with pols to start to tackle the real issues. Until that happens you are going nowhere.

Before 165 became a Mall in the 50s it did have good stores on this block. Claytons, was one.