Brooklyn gets parks, Queensites get crap 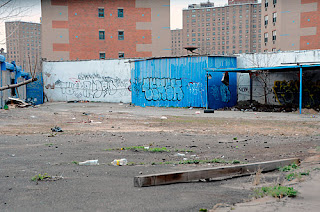 The neighborhood named by Dutch settlers for its plentiful woods is better known today for noisy elevated train lines and burgeoning bar scene, but residents hope the neighborhood will once again live up to its name when a planned park transforms a local eyesore into an urban oasis.

The city will convert a swath of blighted properties at the busy intersection of Bushwick Avenue and Beaver Street into a green space as soon the Department of Housing Preservation and Development, which owns the vacant lots and three connected, graffiti-coated garages, razes the buildings and clears trash from the site.

The Parks Department says it won’t share its vision for the space until the demolition work is complete, but neighbors and activists already have ideas of their own.

The abandoned lots housed a welding shop and a used car dealership until the owners locked up for good after losing a condemnation fight with City Hall in 2007.

Bushwick’s green space has grown nearly seven-fold since 1999, when it had the second worst children per acre of parkland ratio of any neighborhood in the city. But the last decade has also seen an increase in population density as developers have scrambled to cash in on Bushwick’s latte and loft-living allure.

So the city condemned land and businesses to create parks for hipsters in Bushwick who just arrived, but people in Queens who have been asking for new parks for years not only are getting bupkis, but are having pieces of their existing parks sold off to the highest bidder? What great representation we have. Please, continue the non-competitive elections. They're fantastic.
Posted by Queens Crapper at 12:07 AM

It's typical honestly. Just like elected officials didn't care to make park space beforehand in North Brooklyn until it was ripe for rezoning (after the fact); they don't care about those here on our side in Queens and the few parks we have - well they arent on the industrial side. Preach.

Some of the problem has to do with weak community and civic organizations.

Take a look at Middle Village. Bob Holden heads the Juniper Park Civic Association and Juniper Valley Park is in great shape. Every time I walk through it parks department employees are scurrying about performing maintenance.
We need a local civic leader who is interested in the community and not just personal political advancement.

Yes. Bob Holden is a great activist. But he and JPCA didn't get St. Savior's, did they, and the community deserved it.

WTF? In my neighborhood Parks won't take land if you GIVE it to them; they say they can't afford upkeep. I really hate hipsters... they are the poster-shildren (children, I say...) of our screwed up city.

Why does Brooklyn do better than Queens on practically everything?

Because Brooklyn has far more savvy voters...while Queens voters have shit packed between their ears, instead of brains.

The cathedral of corruption, where Queens is bought and sold,is borough hall.

Clean out that stinking stable, and we might have a chance.

St. Savior's is not in Middle Village, it's in Maspeth. Plus St. Savior's had absolutely no support from the Crowley's, the mayor, the borough, etc. Maltese, Hevesi and Addabo supposedly secured grants for the project but the money is nowhere.

Also, where is the building now? Is it still in trailers on a lot? It was supposed to be re-constructed in Lutheran/All Faiths cemetery but without the grant money that won't happen.

There is only so much a civic leader can do. They are not miracle workers and Savior's needed a miracle.

St. Savior's appears to be out of sight and out of mind.

crapper:
Correct, but Maspeth is not their home base. It's more of a Satellite community for them. Unfortunately Maspeth is an Orphan.

And what is the status of St. Savior's church? Five years and counting.

Queens gets the $hit end of the stick. Have you seen the Bowne House recently? The Parks Department is really on top of that one. I'm surprised that isn't dis-assembled and sitting in a trailer someplace.

Strange how the Parks Departmnt can spend hundred's of thousands of dollars on a Bocce court in Bowne park but have trouble hammering a nail into the Bowne House.

Why do we have no money to care for Queens parks? (It's a mystery...)
Why is there a teacher hiring freeze when Queens schools are more crowded than ever? (I wonder...)
Why are so many Queens roads in tatters? ($500 million doesn't go very far when there are more important things to spend on).

An encompassing, sustained investigation into contract awards in all agencies. ASAP.

That's why we need more civic watchdogs running for office. Even if Koslowitz (D-Forest Hills) defeats Torodash (I-Kew Gardens), by having an opponent, she will now have to debate him and defend her record of accomplishments and omissions.

I was there from the get go!

I can affirm that St. Saviour's wasn't lost because of Bob Holden dropping the ball in any way.

Bob's Herculean efforts, and those of many others, were severely thwarted. The neighborhood was betrayed by crooked politicians like Councilman Dennis P. Gallagher, who stabbed his constituents in the back.

Mayor Bloomberg, and later Liz Crowley, didn't give a damn about Maspeth's history, so these 2 liars turned their back on St. Saviour's.

Crowley promised to fight for a park on its site.
That was just some more of "dizzy" Lizzy's lip service, as usual!

Bite your elected official's ass instead of kissing his joint, and you'd get some service from him!

Unfortunately most Queens voters are as dumb as a post! Beyond tending their lawns, critical thinking is beyond most of them.

Spewing vituperation at your fellow Queens residents (especially here, where you're preaching to the choir) is not the best way to ramp up activism. Talk to your neighbors, co-workers, and every other concerned soul, and let them know that, together, things CAN be accomplished (eventually, maybe).

Oh so you are an expert on ramping up activism?

You can't beat a dead Queens horse to run the derby!

Maybe "spewing vituperation" and talking down to Queens' lazy dullards will embarrass them enough to wake up and fight.

Did ya evah think of that, fella?