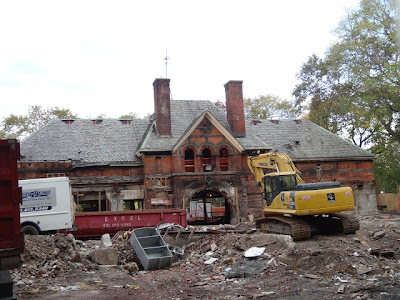 The city has finally announced the compensation it will receive from the controversial new Tavern On the Green and not surprisingly it is far less than what it was previously offered, NYC Park Advocates has learned.

By comparison, Jennifer Leroy whose family had operated the iconic eatery since 1974 - agreed to pay the city $86 million in fees over a 20-year lease according to financial documents obtained under the Freedom of Information Law. Mayor Bloomberg rejected that proposal two years ago and instead awarded the license to Dean Poll who offered $57.3 million. Mr. Poll, who runs the nearby Boathouse Cafe - was unable to open the restaurant.

In addition to losing tens of million of dollars in lost revenue the City is also spending $ 10 million dollars in capital improvements fixing up the building for the new concessionaire who will then build out the space. The dramatic renovation has completely gutted the property.

The Bloomberg administration awarded the twenty-year Central Park bar and restaurant concession to the Philadelphia-based Emerald Green Group, where Jim Caiola, a brother-in-law of ex-deputy mayor - and current Bloomberg LP. employee Kevin Sheekey - is a partner. Mr. Sheekey is also the older brother of former Parks Department spokeswoman Megan Sheekey who was appointed by Bloomberg as the president of the Mayor's Fund to Advance New York City.

I think an investigation is in order.
Posted by Queens Crapper at 1:40 AM

LOL!
Maybe Councilman Dan Halloran can convince NYC to give former "Cafe on The Green" operator Joey Franco a shot.

You really need a crime family like the Gambinos to run a really successful operation. At least the food will be great.

When you're a wealthy thief like Bloomberg, you can put any law on the books that you wish to, and ignore all of the existing ones.

Tavern On The Green hold lot's of memories for millions that have visited it over the years. There is no good reason why the city turned down the former operator and now the City will be in a big $$ hole because of it's past decisions. It all been personal with the Mayor and now this latest disclosure warrants the DA to look into this!

one wonders how much franchise $$$$$the city and taxpayers lost when the new Bayside restaurant "VALENTINO'S ON THE GREEN " went bankrupt,this year ?

it may be that J.Franco was expert in his catering venture, after all.

is it not a coincidence that the D.I.N.O. leaders seem to pick losers ,LOCALLY AND NATIONALLY ?

Anon No. 4: Isn't J. Franco the guy who is mixed up with that deal with Dan Halloran in Whitestone, or is that another mobbed-up guy?

it may be that J. Franco was expert in his catering venture, after all.

is it not a coincidence that the D.I.N.O. leaders seem to pick losers LOCALLY AND NATIONALLY ?

As usual, Gramps is completely out of touch with reality.

What's new this time is that he's defending a Gambino crime family captain who bilked the city coffers of millions of dollars - which got him kicked out of a pretty sweet situation that he had for over 15 years - and then threatened the neighbors of the White House site extensively when they wouldn't sell to him.

Add to that Halloran's assistance in selling out the neighborhood by getting the zoning changed in order for Joey to build a wedding factory in exchange for money under the table to pay off Halloran's campaign debts and you've got a pretty serious case for investigation by law enforcement.

Pretty sick, Gramps. Sounds like we all lose with this loser in office. It's time for you to wake up from your fantasy Republican dreamworld!