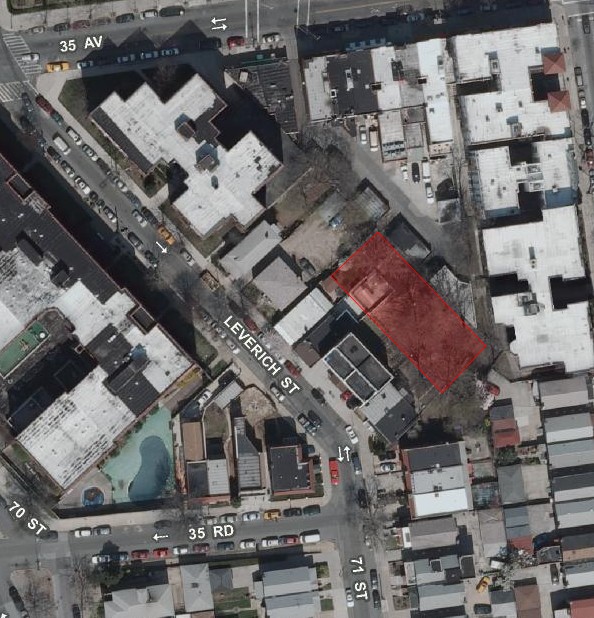 Doctor Mohammed Sajid, at some point during the past few years, built a chicken coop on the Leverich Family Burying Ground, which is not only NOT his property, but is protected from development by the laws of NYS.

He received a violation in 2010 for a fence encroaching on the property.

An idiot inspector in May of 2010 said he had a permit to encroach, but of course, he did not.

There was another complaint put in this month regarding this issue, although the DOB wrote that "property lines not DOB issue." But they most certainly are a DOB issue since the owner had to put down the metes and bounds of his project in order to get approval from DOB for an extension.

The DOB has done nothing.

The pols have done nothing.

It's time for the doctor's chickens to come home to roost.
Posted by Queens Crapper at 12:45 AM

Chickens?
Is the doctor Muslim or Santoria?
Or does he harbor a most unique sexual preference?

This kind of chicken shit
has been going on for too damn long in the DOB.

It's time to bring in the feds to investigate the widespread corruption that abounds in this most corrupt department in NYC!

I smell a bribe!

Does Hellen Marshal give a damn?
She's been "out to lunch" from the get-go.

Who else is there that will keep their dynasty in power?

If Dr. Mohammed insists on
encroaching upon a sacred HISTORIC burial site...
then perhaps we should be disposing
of our doggy doo-doo on Dr. Mohammed's door step.

Terrorist chickens. I bet they have IEDs sewn into their stomachs.

Where was the 'Cemetary Project' when the Negro Burial Ground on Corona Ave was ripped apart last year?

How about Mr Headston Stanley Cogan shrugging when the Boroughs Family Cemetery was partially built upon? and the other half is still sitting on a build-able half lot?

What kind of Doctor is this that's building an chicken coop in the most metropolitan city in the world, a hillbilly Doctor? A witch Doctor? A shaman?

It is illegal by all means, live chicken brings all kind of deseaces, himself as a Doctor should know this better than anyone.

If he wants to raise chicken he can move anywhere in Long Island.

It's actually not illegal to raise chickens in the city. Just can't have roosters.

Big deal, this is Queens. The parks department allowed the bridge to place a new playground on top of a site that was found to have American Indian artifacts, along with British war artifacts, from when they attacked Francis Lewis' home. That's right folks we found artifacts and were told to keep it hush hush.
Both the bridge people and the parks higher ups knew about it.

Grow up, gramps! GAHS doesn't do much either!

They take up space just like QHS does,
and make no waves...afraid of their own shadow.

And I'll bet the Chrysler Building on 42nd Street,
sits atop of more history than can ever be imagined.

Out with the old and make room for the new,
even if it means pillaging the past.

That's the big rotten apple for you.

But in Queens,
it's WHOLESALE sellouts by complacent or crooked
politicians of our rich local history!

The eggs of the chickens are for a ritual.
A way of removing or detecting the "evil eye." Apparently in Mexican, Central American and in parts of Islam

I fresh laid egg is rolled across the body or placed beneath the bed. It is then cracked open into a bowl of water. If it's "hard" or "looks like an eye" then the evil eye has caused the illness."

A 2nd fresh raw chicken egg is rolled over the body of the victim while chanting to absorb the evil eyes power. This egg is then broken into a bowl of water and examined for eyes on the surface of the water (we call them bubbles)
The number of eyes (bubbles) on the surface determines the number of people that passed Evil Eye that has been removed.

Its all a bunch of 3rd world crapola !

Or his family could like fresh eggs. It's not so much what was built, but the fact that he built on property he doesn't own.

it's always Indians or Pakastani's who do stuff like this. they are importing third world tactics.