Community Board 11 leaders are calling the city’s redistricting commission not to break up several northeast Queens communities that the board serves with new City Council district lines.

Jerry Iannece, the board’s chairman, wrote a letter to the commission this week to voice concern that new proposed lines would split Bayside Hills between two districts and Auburndale between three districts.

“It’s gerrymandering at its worst,” Iannece said. “I think it’s wrong and it’s political. Bayside Hills is split down the middle and Auburndale is split between three separate districts.”

Under the proposed lines, Bayside Hills would be shared by the 19th and 23rd Council districts, while Auburndale would be split between the 19th, 20th and 23rd.

“I don’t care where Bayside Hills goes, but it should be held intact in one district,” Iannece said. “And the housing stock and local issues in Auburndale are different from those in the 20th district, which is downtown Flushing.”

In other words, someone really doesn't want Jerry to have a base should he run for office again.

Here's the excerpt from the Queens Civic Congress' report: 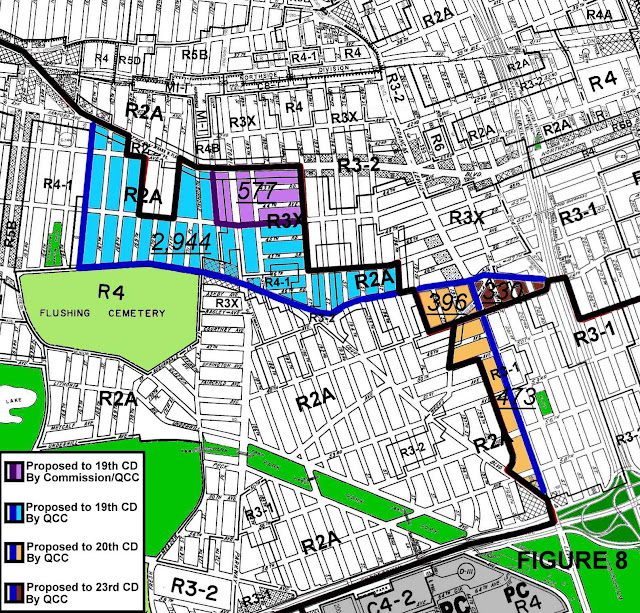 The Commission has proposed that five blocks of Auburndale in the St. Kevin's
neighborhood be moved from the 20th to the 19th. While the Auburndale Improvement
Association and QCC agree that these blocks should be retained in the 19th, we also
believe that the rest of the blocks north of 46th/48th Avenue between 166th to 196th
streets should also be added to the 19th from the 20th.

The area between 166th Street and Utopia Parkway - the Station Road area in Auburndale - is currently divided between the 19th and 20th Council Districts. The well-defined neighborhood, almost entirely located in a detached single-family zone (Figures 4, 5 and 6), from the Long Island Railroad to 46th Avenue. The portion to the north of Northern Boulevard and two individual blocks to the south are located in the 19th, with the remainder located in the 20th. The Station Road Civic Association, which also represents the area, has stated that it is against the current split between two Council Districts.

To the west lies East Flushing, with significantly higher zoning and population density, while to the east is the St. Kevin's neighborhood which has a preponderance of one and two-family detached houses. Additionally, the blocks immediately south of St. Kevin's Church are several blocks of one-family rowhouses; half of those houses are in the 19th, while half are in the 20th. Overall, the St. Kevin's neighborhood is evenly split between the 19th and 20th Council Districts presently. QCC believes that these 28 blocks, along with the 5 already proposed by the Commission, should be added to the 19th as they have similar zoning, neighborhood character and demographics (Figure 8).

The Francis Lewis Boulevard corridor from the Long Island Expressway to 48th Avenue is a politically confusing area, with jagged lines unnaturally dividing the area. The Auburndale Improvement Association and QCC believe that the Council District lines should reflect the major boundaries of the area - Francis Lewis Boulevard and 48th Avenue, which are both major roads - in dividing the area between the 19th, 20th and 23rd Council Districts. In total 10 blocks would be added to the 20th Council District from the 19th and 23rd; and 5 blocks would be added to the 23rd from the 19th, better delineating the already defined portions of the neighborhood (Figure 8). 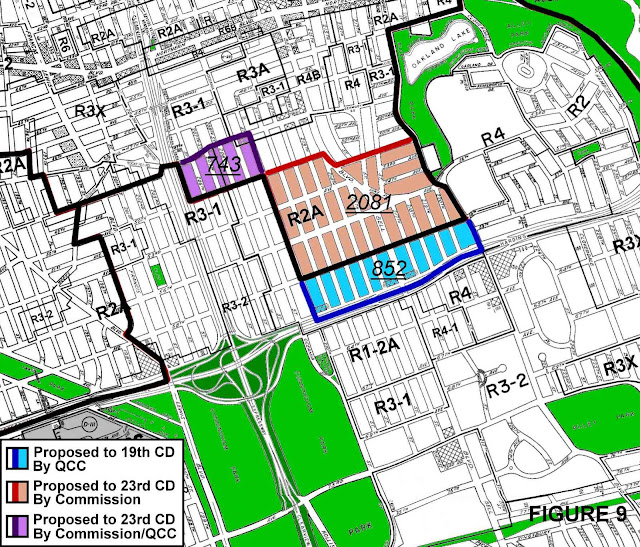 The Commission has proposed that five blocks south of 48th Avenue between the Clearview Expressway and 210th Street be moved from the 19th to the 23rd Council District.

While QCC supports this particular change, we are adamantly opposed to the proposed move of 28 blocks of the Bayside Hills neighborhood from the 19th to 23rd Council District. Before the 2000 census, all of Bayside Hills - which has had specifically demarcated boundaries since its founding in 1936 (210th Street, 48th Avenue, Springfield Boulevard and the Horace Harding / Long Island Expressway) - was located in the 19th.

After the 2000 census, 11 blocks adjacent to the Long Island Expressway were moved into the 23rd. The goal of the Bayside Hills Civic Association, which has represented the neighborhood since its founding more than 75 years ago, was to move those 11 blocks back to the 19th with the remainder of Bayside Hills (Figure 9). QCC supports Bayside Hills Civic Association in their push for the reversal of the Commission's proposed move of 28 blocks from the 19th to the 23rd; furthermore, we support maintaining the unity of Bayside Hills by requesting that the Districting Commission move those 11 blocks adjacent to the Long Island Expressway back into the 19th Council District.
Posted by Queens Crapper at 12:47 AM

Why is this so startling? So Bayside/Auburndale are the only communities gerrymandered? which other Queens communities are not?

It's happening in a lot of communities. This is the first one I've profiled. More are coming.

also Gerry's house was cut of the the 26th assembly district in 2000.

This IS Queens, NY.

The reason that Orientals and south Asiatics
want their own districts is so that eventually
they can crack any low density zoning that still exists...like in northeast Queens, etc.

They live cheek to ass in India's and China's cities and have no problem screwing up ours!

Anonymous said...
"The reason that Orientals and south Asiatics
want their own districts is so that eventually
they can crack any low density zoning that still exists...like in northeast Queens, etc.

Absolutely true and disgraceful that beautiful neighborhoods are turning into this mess. It is disgusting and it's being allowed to continue.