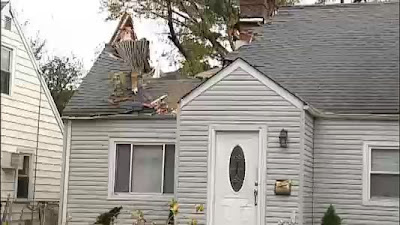 A man in Flushing was killed when a tree fell on his house. 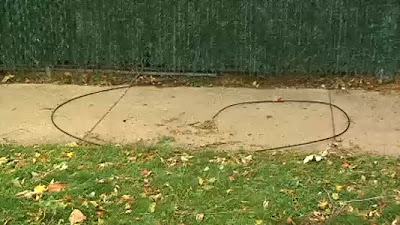 A woman was electrocuted in Richmond Hill.
Posted by Queens Crapper at 12:04 AM

I consider myself and family very fortunate - we were not affected by the storm in any way and never lost service.

But others went through such terrible tragedy including but not mention - 80 homes lost to fires, folks who drowned in their own homes, or their work place in a garage, someone was swept away by water in the street and killed crashing into a storefront window?

Others are cold without heat, maybe wet - some without power, internet, cable, phones, food in their neighborhoods, flooded streets that folk can't get around until the water is pumped out or recedes! This goes on and on.... People have lost their cars, property, damaged their properties.......

R.I.P....this could have been averted if the NYC Dept. of Forestry would remove the many 100'-150' trees in front of houses.

one limb fell and broke the car windshield of a new tenant on my block,on Monday.

older residents never parked under those trees ,during storms/hurricanes.

-There is no NYC Dept of Forestry.
-The Dept of Parks and Recreation is responsible for street trees.
-The budget for parks is less than 1% of the city budget, so maintenance of street trees is lacking.
-When increasing the budget for park maintenance was suggested on this blog, it was mocked by commenters.
-Now you can understand how far a gift like Paulson's money could go in Queens
-Anyone advocating for the removal of healthy mature trees isn't seeing the forest for the trees, pun intended.

Too bad that Mayor Mike wasn't standing under a poorly cared for street tree in Queens.

It would have spared us residents the necessity of hanging him from one!

But with hizzoner's "imposing" 5'7" stature, he could be just as easily hanged from a mature Azalea bush.

Queens is a forgotten borough and hurricane Sandy has proved this quite dramatically!

Where are our city council members?

Likely they're on the take or addled like "doofy" Dan Halloran.

Come to think of it Halloran has a twisted brain and recieves bribes...a double whammy to his constituency.

Queens Crapper said:
-Anyone advocating for the removal of healthy mature trees isn't seeing the forest for the trees, pun intended.

I can't but agree with this. No amount of storm would want me to see those trees that give me shade in front of my house felled. It would make the summers here even less bearable than they already are.

I would instead suggest some concerted efforts to put power lines under the ground in the outer boroughs. This would instantly take care of most power outages as well as many of those fires.

Obviously, ConEd is in charge of those so I don't know what it would take politically to start working on that.

I've got my tickets...and what a show it is!

"Les Mayor Miserables"...produced by the city council and directed by the NYC building/real estate industry.

When a hurricane hits, you are supposed to seek shelter below ground in case the windows get blown in, the roof gets ripped off the house, or something falls. When I was a kid and Hurricane Gloria hit, we were advised to seek shelter in cellars. This unfortunate fellow was on the 2nd floor when the tree fell. Advocating for the removal of healthy tall trees and using this as an example when it was more of an example of wrong place, wrong time, is foolhardy. The family even stated that they thought the tree was damaged and could come down. If that's the case, then the house should have been evacuated.

I remember Gloria. There were just as many downed trees then as there were now but not as many deaths. What the city needs to do is take care of its tree stock and educate the public about safety precautions to take during hurricanes.

There are trees over 200 years old in the borough that survived the storm with nary a branch lost and trees younger than 50 that toppled. Age and size alone don't explain why trees fall. Cutting them all down...not the answer.

the lawsuit filed by the family of the St. John's Graduate student killed by the "MATURE" 50'-60' tree falling on his house,may wake legislators and taxpayers $$$$$$ up.

legislation is needed to allow homeowners the option to condemn a curb tree in front of their houses, that may be their death warrant.

a homeowner on 203 st./42 avenue left his house at 6PM on Monday to move his daughter's car from the curb to his driveway. as he turned from his doorway the 80'Mature tree fell on the car and crushed it.a few minutes earlier he would have been in the car,when it was crushed.

the top branches of the tree extended across the street to the front yard at the other side,almost crushing another house.

203 street is still blocked ,on friday,with numerous wires and a security vehicle protecting the public.

many of us like the Mature trees, but not when they kill us and our loveones.