In the shadow of Ed Koch's bridge... 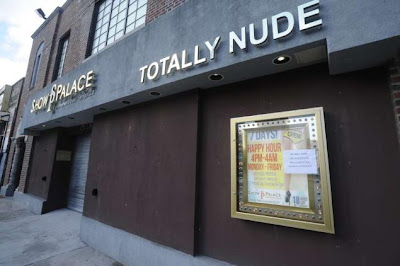 The owners of a controversial Long Island City strip club who have twice been denied a liquor license are hoping the third time’s the charm.

Lawyers for 21 Group Inc., which currently operates Show Palace, have asked the New York State Liquor Authority to reconsider their most recent application.

The authority will mull that request at its Oct. 25 meeting.

Show Palace, formerly named Gypsy Rose, went ahead and opened several months ago without the liquor license. The all-nude club and restaurant sits at the foot of the Queensboro Bridge.

The authority rejected its application earlier this year after intensive lobbying by local civic leaders and elected officials.

They pointed out the city has invested millions in helping that section of Long Island City shed its seedy image and transform into a thriving business and residential center.

“People stop at a light and stare at this all-nude sign — that’s not the welcome mat that we want for our borough,” said City Councilman Jimmy Van Bramer (D-Sunnyside). “We are proud to call this area the gateway to Queens and it has changed for the better with many families coming in and calling this neighborhood home.”

But Terry Flynn, the lawyer for 21 Group, pointed out the club meets all zoning and building code regulations for the site.

“They are qualified to hold a license,” said Flynn. “This place has been operating without any incident whatsoever.”

Interesting how media calls it the "Ed Koch-Queensboro Bridge" when the mayor is connecting some stupid legacy project to it, but when something seedy near it is being reported on, Koch's name gets dropped.
Posted by Queens Crapper at 12:21 AM

Does Eddie do a gig thee?

A priority for Queens citizens:

As soon as Bloomberg is out of office, the official renaming of the bridge to "Queensborough".

Any candidate running for the mayoralty, as soon as he or she sets foot in the borough, should be asked their position on this issue.

Note how Jimmy is concerned because this is a potential development site for the Suna's "public access jobs-creation project"? (in plain English five 40 story buildings)

Meanwhile the Normandeau Newswire discusses the reality of the people actually living in a area targeted for development and displacement:

Wednesday evening, October 3, 2012, another female was shot at Queensbridge Houses.

Last week a child was shot with a stray bullet coming through her third floor window, while doing her school homework in Queensbridge Houses.

Nina Adams, a former Tenant Association President says: "Van Bramer SHOULD have been giving out bullet proof helmets and bullet proof vests and teaching children how to duck."

The current President of the Queensbridge Tenant Association is Pamela Thrower.

Nina Adams currently runs “Queensbridge Outreach”, which until its funding ran out, would take children on educational trips away from Queensbridge Houses.

Van Bramer was involved with a march against guns event on Monday. Present was
NYS Assemblywoman Cathy Nolan who many years ago had helped a student who was shot at Queensbridge Houses get home tutoring after she was unable to attend school.

Van Bramer's office had been asked about crime statistics 6 hours before this latest shooting. Area stats had been discussed at a meeting of the Dutch Kills Civic Association with Van Bramer's rep present.

Will anyone be arrested? Will anything change?

Why is the cultural chair of city council, Jimmy Van Bramer, giving out 100s of useless bike helmets while cutting programs to kids in his district?

No wonder we have the dumbing down of America!

Because you've got to have a sound head
before you can give some.

Ed Koch's bridge?
Are you referring to his upper plate?