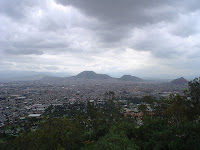 After the estimated number of Mexicans visiting the city nearly doubled in six years, tourism arm NYC & Co. is ramping up its presence in Mexico City, part of its series of far-flung tourism offices.

"We want to be visible and make sure we're top of mind" to Mexican travelers, NYC & Co. President George Fertitta said.

The agency has had a representative in the Mexican capital, but the new office represents a significant boost in New York's efforts to market its attractions there.

The new office won't cater to travelers themselves. Instead, it's meant to help forge closer relationships with Mexican tour operators, travel media, airlines and others who steer where tourists go—"to be able to have day-to-day contact," Mr. Fertitta said.

And how many Mexican travelers did NYC take in permanently?
Posted by Queens Crapper at 12:38 AM

We have enough illegal Mexicans already. Why do we need to lure anymore?! Why spend a dime on such an idiotic tourism promotion?!!!!

how many did not go home ? only SANCTUARY SANCHEZ knows....

I'll e-mail a photo to Mayor Bumberg's office of a dozen or so Mexican loiterers hanging around the southeast corner of 161st Street and Northern Boulevard.

No doubt that our "esteemed" Councilman Halloran
is to busy ballyhooing or bar hopping to be interested in this matter.

Blunderberg needs to fill the soccer stadium he is building in Flushing Meaows Park....

There are an awful lot of rich Mexican drug lords
and traffickers running around in their country.

We want to lure them across the Rio Grande
to spend mucho pesos in the big apple.

The city is already over run with "colorful" 3rd worlders.
Wrap that in a tortilla and stuff it, your honor!

How about opening up a southwest hotel
right next door to the Bloomberg mansion.

Poster number 5 you could not be MORE right.

The war on drugs has allowed these drug cartels to make astronomical profits by selling drugs and the American/New York City government is trying to come up with any way they can to siphon those "earnings" to themselves.

To Broadway Bob, you need not worry, the Mexicans that will becoming here will be of the European/lighter skin mestizo type not the short "cholo" type.

I hear Bloomy is offering a discount rate for women 8 months pregnant.

You guys seem to ignore that there is a large and growing middle class in Mexico. At least 20% of Mexicans have household incomes above $20,000 USD, with 10% above $52,000 USD. There are also wealthy Mexicans who own business or are professionals who come here as tourists or on business.

According to the US Department of Health and Human Services, the 2012 poverty guideline for a household of 3 people is $19,090.

C'mon man, you can do better than that!

I'd bet $100 that you've probably posted comments on this blog crying that the reason so many Mexicans are in the U.S. illegally is because they are so poor, therefore we should feel sorry for them.

Stop trying to grease me up with your manufactured,
or manipulated statistics.

Now all we need are those nice warm Santa Anna winds blowing across the east River.

Maybe the crooked Democratic machine in Queens
has been running low on Asian campaign donor dollars
since all of this John Liu business.

I can just picture
Senor Bloomberg and Senorita Quinn
doing a Mexican hat dance together in Times Square.