What a soccer stadium will actually cost us

From a letter to the editor of the Queens Chronicle by MLS president Mark Abbott:

Your story, “Less recreational space — Teams worry about proposed MLS Stadium in Flushing Meadows Park” (Oct. 11, multiple editions), is a drastic distortion of the reality of our stadium proposal. Most notably, our stadium would not result in a loss of community soccer fields.

In fact, MLS plans to renovate the community soccer fields surrounding the stadium, transforming them into world-class, all-weather turf fields for the community to use year round.We will renovate these fields before the stadium is built and that renovation will be phased so players are impacted as little as possible.

Here's an aerial of Flushing Meadows: 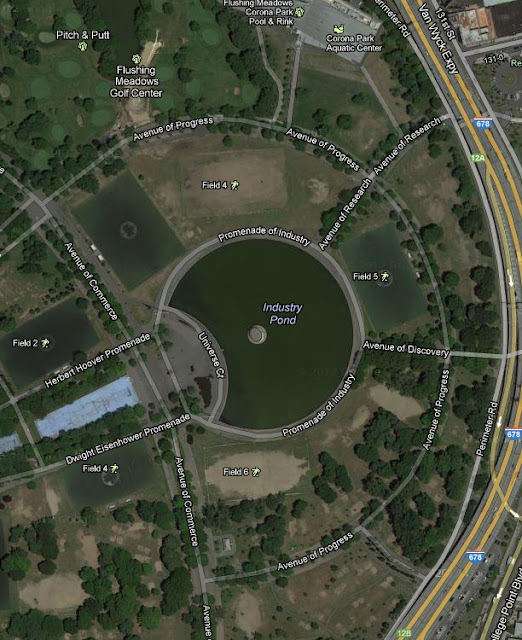 Here's a rendering of MLS' proposal: 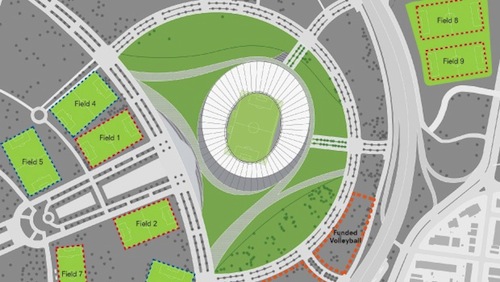 Now, I'm not much of a cartographer, but it sure looks to me like 4, maybe 5, soccer fields - two of which are artificial turf that we taxpaying schmucks spent a lot of money on - are going to be swallowed up by this stadium.

Not only that, but it looks like they've proposed to chop down a shitload of trees in the park to install volleyball courts that no one asked for, as well as "relocate" the soccer fields they're stealing to practice areas that currently are situated between the trees. So, they'll be Replacing porous ground and trees with environmentally unfriendly artificial turf, which certainly will not be used inside the stadium, but apparently is good enough for the rest of us. If it burns players in the summer, when the fields will be most heavily used, well tough shit.

In talking with friends and neighbors about what Queens needs most, not one of them mentioned a soccer stadium. Or a mall at CitiField. Or an expansion of the tennis stadium. More parkland, more police, road and sewer repairs, better schools and preventing overdevelopment are the top priorities.
Posted by Queens Crapper at 12:53 AM

"Less recreational space"....
what, in realty, does that really mean?

Reading between the words...SOCIAL ENGINEERING...
and it's NOT that subtle either.

From day one, strategically placed "landscape improvements" in the way of boulders, were placed around areas near the Queens Museum years ago.

Answer:
To keep those "loud, troublesome" Latinos from congregating or using that area.

No city official will EVER admit to that, of course.

NYC has a long term plan to RELOCATE Latinos away from Corona. Perhaps they will replace them with a less "troublesome" race...like Koreans or Chinese.

The bottom line being...that Corona real estate is worth too much to keep it held hostage by its current population.

This is the REAL truth if ANYONE has the eyes to see what NYC is really up to.

This would NEVER happen to Central Park.

Here in Queens we crooks instead of guardians
to protect our green space.

Bloomberg and his brigands are merely continuing
the legacy that Mayor Dinkins first began.

Didn't we. already pay $millions over the past 5 or so years to renovate the soccer fields in the park ????
SAVE OUR PARK!!!!!!!

FMCP is one of Queens' MONEY PITS...
where patronage jobs (construction contracts, etc.)
are dispensed.

They will be redoing this old ash dump for at least
the next 50 years!

It gets even scarier. The fix is in.

NYC has a long term plan to RELOCATE Latinos away from Corona. Perhaps they will replace them with a less "troublesome" race...like Koreans or Chinese.
--------------------------------
If that is the case, then they really seem to be dragging their ass on that plan. Yes, I know you wrote "long term plan", but there really doesn't seem to be any indication of this plan in any way, shape or form whenever I go through Corona.

It's the long term plan alright. You're just myopic!
Change your eye glasses next time you pass through Corona.

Incursions of Koreans can be detected.
That's step #1.These seeds will grow and multiply.

Incursions of Koreans can be detected.
That's step #1.These seeds will grow and multiply.

Similar Chinese (Taiwanese) seeds were planted in Flushing in the mid 1970s.
30 years later they've certainly sprouted and multiplied!
----------------------------------
Maybe so, but it just seems that it is going to be alot harder for the asians to chase off the latinos in Corona, Elmhurst and Jackson Heights than it was to scare off the Irish, Italians, Germans and Jews. The Latinos don't seem to be planning on leaving anytime soon.

As a former resident, I agree that Koreans are moving to Corona, buying up homes like gangbusters to illegally convert for rental property. Koreans are landlords to the Latinos, who don't own property. It's doubtful the
Latinos will be leaving, as they are in no way upwardly mobile. From what we witnessed, assimilation and pride in education are not encouraged within this community. Sadly, teenage gang activity is becoming rampant. So perhaps NYC knows this and does have a plan.