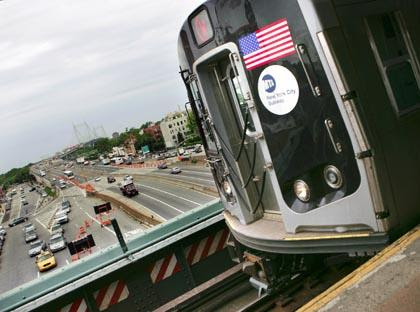 In the decade that ended in 2010, housing and transportation costs rose nearly twice as fast as income for median-income households in the New York metro area, according to a new report tracking the nation's 25 largest metro areas. The report, which was released Thursday morning, also had some good news, however: Despite the jump in costs, the New York area fell into the middle range in the group in terms of affordability, ranking 10th.

Housing and transportation costs in the New York area rose 55% during the 10-year period, while income grew 31%, according to the report by the Center for Housing Policy, an affiliate of the National Housing Conference. More than half of households' income, 56%, goes toward housing and transportation, with housing carrying most of the burden, at 34%. The report, dubbed "Losing Ground: The Struggling of Moderate-Income Households to Afford the Rising Costs of Housing and Transportation," covered New York-area households with annual incomes of $34,389 to $68,778.

The rise of housing and transportation costs in New York outpaced the average for the 25 metro areas, which rose 44% in the decade, driven mainly because of housing expenses.

if they were savers, the federal reserve permits banks to offer about .8 % on a certificate of deposit.

LOL!
Not to worry...
super rich Mitt Romney to the rescue.

Now there's a man
who can empathize with us downtrodden.

Don't be a dope. Watch how you vote.

Caution:
Mitt wants to "privatize" your medical coverage.
You know what that means...
you'll be spending more of your shrinking income.

I'm glad I don't own a car.
NYC public transport is so convenient.

It must be the long time industrial pollution in those areas that have affected his brain functions.

If you are unhappy with NYC...move to Long Island.

Expect your property taxes to be at least $15,000.
Then you've got your commuting expenses and all.

NYC is still the best by comparison.

If you were smarter you might earn more money.

The same kind of mind set exists in Auburndale.
Eastern Queens abounds in dummies too.

Maybe it's too much of the quiet life that erodes
their mental capacities here out east.
That type is universal...with a "mind like a steel trap"...locked in the 1950s.

I hope I never meet this boob....since I'm his Broadway neighbor.

On second thought,
I think I have met him at a BFHA meeting.

He's the one that was a plant from Halloran's office...sent there to kiss Dan's ass.

Why do people always compare where they are to where they could be? If it sucks where you are, work to change it instead of just acting like a doormat. It's like when Bloomberg quotes crime stats and says, well they're better than they were in 1985. How are they as compared to a year ago?

Because that's history, bub.
Things could ALWAYS be worse...and they usually are.

I'm still grateful to be living in the "Big Apple".

For at least 20 years, I've worked very hard
trying to improve conditions in our city.

Run for office if you are dissatisfied with your representatives, instead of running away from your responsibilites.

Talk is cheap. Action is expensive.

In regard to Romney, I am giving the Republicans one last chance to shape up this country. If that doesn't work, then I don't care if this country goes socialist or if there is all-out revolution.

Rep.Paul Ryan,G.O.P. V.P. candidate said:S.S. and Medicare MUST BE REFORMED SOON, before the lack of funding loses it for all citizens.
1-no senior presently over 55 will lose their Medicare H.C. coverage, including those who opted for MEDICARE ADVANTAGE. administered by private insurance eg.(Empire B/C-B/S.
2-citizens under 55 can opt for 401 K type H.C.plans ,that will always have their contributions guaranteed when they need it.

3-he proposed other medical saving plan options also , including Medicare at 65-67.

both parties have to reform this fiasco ,so all can get benefits that they contribute to.

why have the politicians and unions(waivered till 2018) been exempted from the Affordable H.C. Law ?

Can't wait until that man leaves office. He spends money like water on useless things like the multi-million dollar time clock mistake from a few years back than raises our taxes to pay for his unwanted projects. We'll be paying for Bloomberg's follies years after he's gone.

you could always move to another state

Should be "Increase of Profit" instead of "Cost of Living"...


Isn't Social Security currently running with a surplus, if I'm not mistaken?

It's future will be scuttled if "Eddie Munster" Ryan and that ransacking Romney get their paws on it.

Their idea of "reform" is to take more money out of middle class pockets and put it into theirs.

I'm sure that these charlatans have "folders" full of "great" ideas to "reform" (screw up) America.

BTW:
Without what you throwbacks call "Obamacare", your insurance company would disqualify you for coverage if you have a pre-existing medical condition.

Then you sell your house to pay your bills.

If you live in one of those tacky Mc Mansions, you can expect to pay higher real estate taxes.

Find another city, county, or state...that can offer more than what NYC has to offer...which has lower real estate taxes, without moving to San Antonio.

Romney stated that pre-existing conditions and young adults to age 26 on their parents policies, will be included n his H.C. plans, during the first debate.

do you recall that the majority of the nyc Dem/Progressive members all voted for the 20.8% property tax hikes, since 2002, except TONY AVELLA. you must not blame ONLY Doomsberg.

Liu retaliated against me when i exposed his vote for higher property taxes, at a town hall meeting. the thieves do not like public exposure ,in their faces.

the Conservative/G.O.P. members voted NO.

i always thanked Avella at public meetings.credit where credit is due? but the tax still rises.

the county taxes include school taxes,where nearly 95 % of the pupils actually graduate with a college s.a.t. passing education.
nyc public education only graduates 45-50 % of pupils with the same education possibilities. most Queens parents ,who want their child to achieve spend $5,000 /yr..for K-8 and $9,000/yr. for 9-!2th year, in private /parochial schools.

Beware of the B/S misinformation on this site ?stay informed with facts.

There goes our ignorant Auburndale "A" hole again.

You sound like one of Mitt's brainwashed "true believers"...who expects him to return America to the good 'ol "doo wop " era of the 1950s.

Romney is a weathervane. He blows whichever way the wind blows. You will find your take home pay decreasing steadily if he wins....while his take home salary will be skyrocketing!

I wouldn't trust that liar with my Chia pet!

Part of me would love to see Mitt win.
Then who will you blame for screwing you...Obama?

Dust your brains off, bub...if you've got any.

What is it with these radical Republican retards?

They seem to be forever wanting to restore America to its former glory...whatever the hell that bag of air is.

Deal with the present, for that's where we live!

BTW,
I can name a few leaders who wanted or want the same thing for their countries...a return to their glorious past:

Abe Lincoln was a great Republican, so was Dwight Eisenhower...then their ranks started thinning.

I have no particular party affiliation . I'm an independent voter who votes for the best qualified candidate.

Step up to the 21st century...gramps.
You appeared to have missed your train.

Is Dan Hallorn's fellow nut job, Concannon, following all of this?
Maybe he's the troll doing all of the posting.
Does he live in Auburndale?

Romney presents himself like an insurance salesman...
and I wouldn't buy a used car from him either!

the 23 million american citizens with out jobs and millions forced to take part time jobs since 2008, will not vote to repeat their "mistake", in 2012.

with all of these former employed not paying taxes, the public union worker will be fortunate to have ANY paycheck.

the present fed. gov's hi-jacking of $716 BILLION from senior 's medicare coverage must be repealed and a majority of voters reportedly agree with me.

#19 ...one will find that a successful capitalist like Romney, will take a large loss of income , if he is the next P.O.T.U.S.

the correct zip is 11361, which is not Auburndale.your ranting style has clouded your facts, as usual.

Anon No. 24: So what else is new? Who was the last President not to take a pay cut upon taking office?